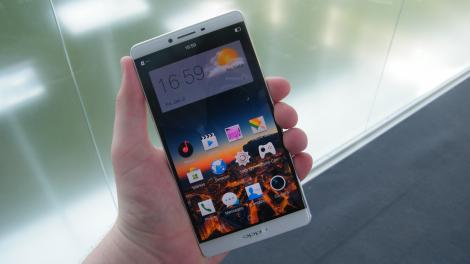 Ever since we first went hands-on with the Oppo R7 Plus in China, I’ve been waiting to put it through its paces more thoroughly. Back then we were impressed with the flagship-level specs, performance and features, but most of all with the apparent price, which would have put it firmly in the mid-range price band.

Now the Oppo R7 Plus has arrived, and it’s a little more expensive than we anticipated at £319 SIM-free. So, with the OnePlus 2 already in the marketplace and in roughly the same price band, how does the Oppo R7 Plus hold up?

The inspiration for the Oppo R7 Plus is clear – hold it up to an iPhone 6 Plus and it’s immediately obvious that the Chinese manufacturer has worked hard to ape Apple’s flagship. This is a shame in many respects, because the Oppo R7 Plus is more than capable of standing on its own two feet, and the slavish mimicry rather cheapens the overall effect.

Oppo’s imitation of Apple isn’t limited to the hardware either. Its ColorOS build of Android (5.1.1 at the time of this review) shamelessly copies many of the visual cues of iOS, from the deep-space wallpapers to the camera interface.

Put the obvious comparisons aside, though, and you’re left with a well-designed if unspectacular-looking handset. Oppo’s gone for a mix of curves and corners that work well together, the former on the rear making the phone sit comfortably in your hand and the latter giving your fingertips something to grip around the front of the screen.

There are two colour options – silver and white, and the gold and white one tested here – and they feature an aluminium unibody construction that’s generous on the brushed metal.

The Oppo R7 Plus feels solidly put together, too, and despite its size I was never worried about it flexing or breaking. On the subject of size, it is big – the 6-inch screen puts it firmly in phablet territory and, thanks to the scalability of Android, it never feels like a simple upscaling exercise. The screen might not stretch all the way to the edge of the frame, but it gets close enough that you’re never aware of significant dead bands.

The Oppo R7 Plus has a 6-inch AMOLED screen, and unsurprisingly it’s the first thing you notice about the phone. Fully six inches in size, and with a resolution of 1920 by 1080, it’s a sight to behold. It’s not just good on paper, either – it’s evenly backlit, and bright enough to be decently visible outdoors in the sun, too. The viewing angles are generous and, as you’d hope on a handset like this, movies and games look incredible.

You can save up to five fingerprints for unlocking the handset, and Oppo’s ColorOS responds swiftly and fluidly. There’s no way of replacing in-app passwords with a fingerprint, but you can use it to encrypt apps if you want, adding an extra layer of security.

On the subject of ColorOS, Oppo promises a smoother, faster Android experience. Given that the phone features 3GB of RAM and an octo-core processor, you’d expect a seamless user interface anyway, but it certainly doesn’t harm matters.

More than a launcher with a few gimmicks, Oppo’s gone beneath the bonnet of Android to tweak and streamline the OS. This means you’re stuck with ColorOS, even when you install and run other launchers on top of it – ColorOS continues to run at full steam in the background.

In light use, you won’t notice the performance hit – there’s enough headroom to enable the third-party launcher to run smoothly alongside everything else. But start opening multiple apps and the RAM being consumed by both ColorOS and whatever other launcher you favour starts to become a factor.

Other highlights include support for two SIMs, or a single SIM and microSD memory card to expand on the 32GB internal memory, and fast charging. Oppo promises 20 minutes of talk time on just five minutes’ charge from empty, and this appears to be accurate – from dead I got between 15% and 20% on the tests I ran.

This is where the Oppo R7 Plus should come into its own – and with an eight-core Qualcomm Snapdragon 625 processor and 3GB of RAM, you’d hope so, too. So I was disappointed that the Geekbench 3 scores were lower than I’d hoped for. It averaged 2987 in the multi-core tests, falling far short of the Samsung Galaxy Note 5 (4975), although that can be forgiven due the difference in price and calibre of component.

Less acceptable was the performance dip in comparison to the OnePlus 2, which averaged 4795. The OnePlus 2 scored higher thanks to its more powerful Snapdragon 810 processor and extra gigabyte of RAM – 4GB as opposed to the R7 Plus’s 3GB. Given that the OnePlus 2 and R7 Plus are in roughly the same neighbourhood in terms of price, it’s a serious shame.

The relative lack in performance wasn’t something I ever noticed when using the handset, though. It runs Real Racing 3 as smoothly as you like, with all the reflections and trackside detail you can ask for, and there’s no drag or dip in performance when navigating any part of the R7 Plus’s interface.

The only time it noticeably drags its heels is when shooting photos in Ultra HD mode, where you have to wait a couple of seconds after pressing the shutter button, but as that’s not intended to be a quick-snap method of photography I didn’t really mind. The nips and tucks Oppo has made to Android in ColorOS really do make a difference.

Battery life is no cause for concern either – despite busy days where I relied on the phone for email, internet, entertainment for my commute, music for working out to and games for my daughter, I never found I’d drained it by the end of the day. Streaming a 90-minute HD movie consumed 19% of the battery. As mentioned earlier, if you do find yourself bottoming-out the battery, a five-minute charge is more than enough to give you an hour or two of extra life.

The Oppo R7 Plus uses clever interpolation trickery (Oppo calls it Pure Image) to produce photos at resolutions of 52 megapixels in Ultra HD mode from its 13-megapixel Sony camera. It does this to enable you to crop into areas of a photo you like – an after-the-fact digital zoom, if you will – or just capture more detail in your regular images, and the results are decent.

It does produce slightly underexposed images, and there’s no way of tweaking the brightness levels or contrast in the native photos app, but the difference in detail between the normal shots and the Ultra HD ones is noticeable.

If Ultra HD isn’t for you – and the processing time after pressing the shutter button means it’s not suitable for all situations – there are plenty of other bells and whistles to play with. Aside from the usual HDR and long-exposure modes, you can choose to shoot in raw, create double exposures, create animated GIFs and even add filter effects to make your selfies more glamourous.

If moving pictures are your thing, you can shoot at 1080, 720 or even in slow motion. Whatever you’re capturing, the laser-assisted autofocus is a massive benefit, enabling you to focus on your subject quickly, and adjust the focus just as rapidly if required.

There’s no denying the Oppo R7 Plus is a decent upper-mid-range phablet. But at £319 it’s priced in a very competitive segment of the market, and it has its work cut out for it.

It looks like an iPhone and feels like one, too. It’s solidly built with lots of aluminium and Gorilla Glass, and it genuinely feels more expensive than it is.

The almost slavish degree to which the Oppo R7 Plus copies the iPhone 6 in both its industrial design and user interface is a shame, spoiling what’s otherwise a very smooth and clean take on Android.

Compared to the OnePlus 2 – which isn’t much more expensive – the less-powerful processor and 3GB of RAM hamper the overall performance, although you’ll struggle to notice in everyday use.

That the Oppo R7 Plus gives you all this for just over £300 is pretty phenomenal any way you look at it, and if you bought one you certainly wouldn’t be sorry. But if I had bought one, and my mate had bought a OnePlus 2, I think I might be a little envious that I didn’t have a more current processor and another gigabyte of RAM under the hood.

However, I wouldn’t be too deep a shade of green. The screen on the R7 Plus is a half-inch bigger, and the camera has some nifty tricks that really are worthwhile. And, despite the processor and RAM issues, using the phone is an exercise in smooth simplicity. Everything just works, seamlessly.

Whether that’s still the case in a year or two’s time, when the latest apps and games demand even more of a handset’s capabilities, remains to be seen. But right now, to complain would be churlish. The Oppo R7 Plus is a great phablet and tremendous value for money.