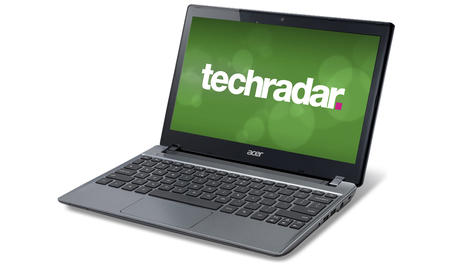 The Acer C7 Chromebook is a cheap laptop at just £199.99/US$199.99 (around AU$191). The reason for this is that it’s a Google Chromebook, a thing that runs Google’s Chrome OS – essentially replacing the entire notion of an operating system with a web browser. 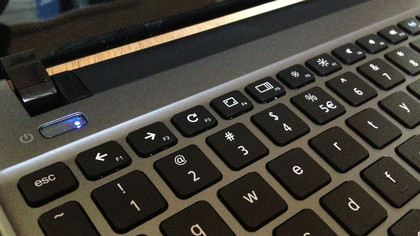 In doing so, though, some of whatever magic the Chromebook concept has seems to have been lost.

Chrome OS is different to the operating systems that most of us are familiar with, such as Windows 8 or Mac OS X 10.8 Mountain Lion. You can’t just install apps you have and you know, such as Microsoft Office or Adobe Photoshop Elements; everything’s done through the Chrome web browser.

That might strike you as limiting, and in a way it is, but if you think about what you actually use a computer for, there’s a good chance that you either essentially do everything through a web browser now anyway – Gmail, Facebook, iPlayer and so on – or that those jobs that you currently use regular programs for could easily be switched to web apps. 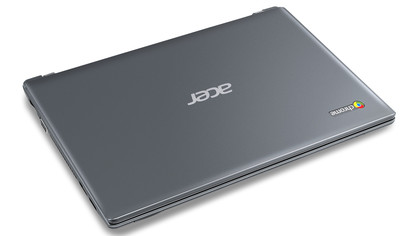 It’s worth remembering that Google’s own suite of web apps – notably its word processor and spreadsheet apps – are actually very capable, and in any case add collaboration tools that mean it’s easy for teams to work together.

It sounds like you need to be connected to the web at all times, therefore, to actually use a Chromebook, but that’s not always the case. Web apps can actually be programmed to work offline using local storage.

Google documents and spreadsheets can do this, happily switching between online and offline mode (once it’s enabled), and no matter how hard we tried, we couldn’t get it to lose a scrap of work. 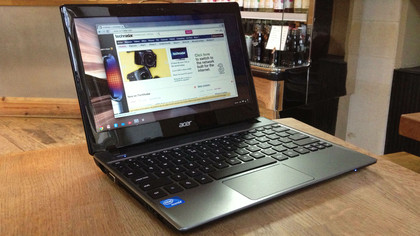 That said, the fact that the Acer C7 Chromebook doesn’t currently even have the option of a model with a SIM slot for mobile broadband – 3G or the like – is baffling.

Sure, your home, work, campus, favourite coffee shop and so on probably have free, fast Wi-Fi, and the robust offline mode of some web apps means that even if you don’t have an internet connection, your Chromebook isn’t a useless lump of plastic. But not even to offer 3G as an option seems daft.

Compared to the Samsung ARM Series 3 Chromebook that preceded it by just a few weeks, it feels like you get more of almost everything on the Acer C7 Chromebook. There’s more storage (a 320GB hard disk rather than 16GB), more connectivity (a VGA port as well as HDMI, and Ethernet as well as Wi-Fi), a better (if still not excellent) screen, and you even get a caps lock key (more on that later).

But more is not always better. You also get more weight – 1.4kg/3lbs compared to the featherlight Samsung’s 1.1kg/2.43lbs – which, while it may not sound like a big difference, is very noticeable. 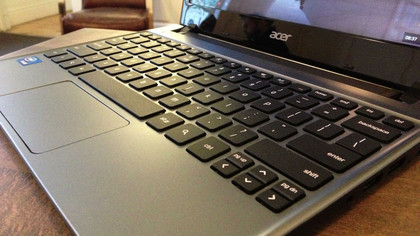 Battery life on the Acer C7 Chromebook is poor – somewhere between three and four hours, or even sometimes less, depending on what you’re doing with it – and it runs hotter. Though it’s not terrible, it feels, next to an ARM-based tablet or even the Samsung Series 3, positively old-fashioned to hear fans spin up and feel heat spat out of an exhaust vent.

Besides, while some of the additions here are welcome – that Ethernet jack will make IT managers happy – some seem less relevant.

What good, for example, is a 320GB hard disk when Chrome OS is designed to be a thin client to cloud services? All it serves to do is to reduce the responsiveness of the computer, and to slow boot times. 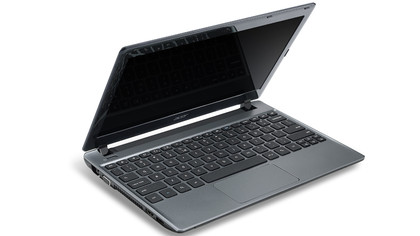 And having a VGA port as well as HDMI may prove useful in certain scenarios (giving presentations, say, since many projector systems still insist on VGA), but currently, Chrome OS can only mirror its display – and not always that reliably in our testing.

As we write, though, the developer release of Chrome OS adds extended desktop mode, so it will make its way to the general release eventually. 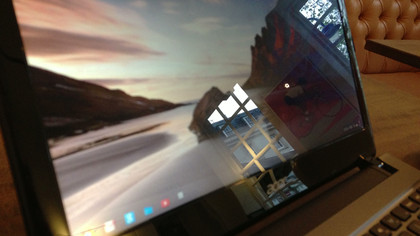 It’s likely that its comparative richness – next to that Samsung Chromebook, say – is just down to the fact that it’s a glossy rather than a matt screen, but that’s OK, and the reflections are less distracting than we’ve seen on laptops that cost four times as much, such as Apple’s MacBook Pro with Retina display.

You get an SD card slot, and a frankly-excessive-for-a-Chromebook three USB 2.0 ports. No, no USB 3.0, but on a Chromebook, there’s little you can use it for anyway.

Having plenty of USB ports isn’t a bad thing in itself, but Chrome OS isn’t really designed to connect to anything but the simplest of peripherals. Even printing is done over the network, either to a Google Cloud Print-enabled printer, or via a middle-man computer running the Cloud Print daemon. So it’s likely that you’d end up using these ports more as charging points for USB gizmos than anything else. 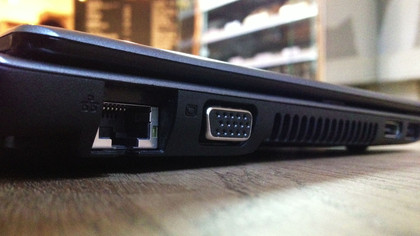 Overall performance of the Acer C7 Chromebook is good. The Intel processor makes computationally intensive stuff such as playing HD video iPlayer streams or (and yes, this qualifies as ‘computationally intensive’ as far as a Chromebook is concerned) playing the Chrome-optimised version of Angry Birds pretty smooth. But the fact that it has a hard drive rather than an SSD means the whole thing feels more sluggish than it ought to.

So, although performance is acceptable once you settle down to doing something, whether that’s writing in Google Docs, watching Netflix, or playing a simple game of Bejeweled, there are stutters and delays in getting to those tasks.

It’s not something you can’t live with, but having enjoyed the responsiveness of other Chromebooks, it’s a shame to see the Acer C7 Chromebook lumbered with old-fashioned laptop problems. 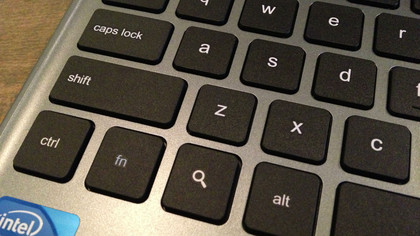 You feel it in startup too. The Samsung Series 3 boots from cold in under 11 seconds, while the Acer C7 Chromebook barely scrapes in under 20. Again, it’s not insupportable, but it’s definitely not desirable.

Naturally, since it’s designed primarily as a device to access web services, how fast it feels is also affected by the speed of your internet connection and how fast Chrome can render pages and run web apps.

As to the latter, Chrome is certainly speedy, and unless you’re working with huge documents, you’re unlikely to feel like the web apps are slow or getting in your way much more than you would with normal, locally-running programs.

And as to the former, well, it never felt like the 8Mbps broadband connection we used most often during testing, nor the significantly slower Wi-Fi in a few coffee shops, slowed us down much either. And, of course, even a souped-up Core i7 monster would have the same bottlenecks if you were using the same suite of online services.

Stability is good. We’ve had issues with occasional spontaneous reboots of Chromebooks in the past – which proved not to be as bad as they sound, since apps such as Google Docs do a terrific job of saving your work as you go – but the Acer C7 Chromebook just kept stoically soldiering on.

The keyboard, though, is very much a mixed bag. It feels dead and unresponsive; we tried to re-train our muscle memory to use lighter touches to compensate, but it never felt anything other than lacklustre.

And while it feels churlish to kvetch about this kind of thing in such a cheap laptop, we kept getting slightly distracted by the fact that, on our keyboard, the letters were printed a little off-centre.

There are compensations, mind you. Unlike with previous Chromebooks where the caps lock key is replaced with a search button – which proves handy if you can force yourself to use it, though you can always reassign it to caps lock in Settings – here, you not only get your caps lock key back in its usual place, you also get a search key on either side of the space bar.

As prices have tumbled, we’ve come to like Chrome OS and the laptops it runs on, and to think that it’s a viable, acceptable option, not because it has particularly developed since it was introduced in 2009, but because the way we use computers has.

For many of us, Wi-Fi is as-good-as ubiquitous, and we are doing more and more through web apps without really realising it.

Don’t get us wrong; if you’re a video editor, illustrator, serious mathematician or even just someone who likes to take photos with a DSLR and tweak the results, you’d be anything from frustrated to outright unable to do any work if you chose a Chromebook as your primary machine.

For the rest of us, though, who spend our days in Facebook, iPlayer, Twitter, webmail, (achem) TechRadar and so on, the notion of a laptop whose sole job is to run a web browser doesn’t seem ridiculous.

The Acer C7 Chromebook is an affordable laptop that will be very usable for many of us, and boasts strong specs. Online apps cater for many of our web needs, so that even if you’re using Word and Excel now, the transition to using Google’s online equivalents is likely to be pretty pain-free.

Besides, the Chromebook concept is justifiably marketed as simple, comparatively secure (although it’s worth remembering how much of your identity you’re giving to Google as soon as you sign into a Chromebook with your Google ID), and a system that keeps itself constantly updated.

Compared with the Samsung Series 3 Chromebook, the Acer C7 Chromebook has more storage, more connectivity, a better screen, a meatier processor that’s able to play HD video streams and more, build quality that feels nice and chunky and, perhaps most importantly of all, a smaller price tag – £199/US$199 (around AU$191) next to the Samsung’s £229/US$249 (around AU$238).

What Acer has done here, it would seem, is take a small laptop – the Acer Aspire V5-171, by the looks of things – tweaked it a bit and shoved Chrome OS onto it. And that’s fine so far as it goes, but it feels compromised.

It also falls down beside the Samsung Series 3 Chromebook, which beats the Acer C7 Chromebook’s three hours plus battery life and stays cool, where the Acer has to spin up fans to cool its Intel Celeron chip. The Samsung’s keyboard is also much nicer to type on, and its significantly slimmer and lighter form factor make it much more toteable.

The Acer also doesn’t feel as much like a Chromebook as the Samsung does.

Ultimately, we’re left unmoved by the Acer C7 Chromebook. It’s weird; compare it to the only slightly older Samsung Series 3 Chromebook and it looks on paper like it’s better in almost every way.

Put them side by side, though, and we’d pick up the Samsung every time. It’s not just that its battery, cooling system, keyboard and dimensions are better. It’s also that it just feels more like a Chromebook, and we’ve come to like Chromebooks.

There are instructions online for how to easily install an Ubuntu variant on the Acer C7 Chromebook as a dual-boot option, and we can see the appeal there. Once you install a traditional operating system onto this machine, its three USB ports, 320GB hard disk and Intel chip suddenly make more sense.

As it is, it just makes you question the whole point of Chrome OS.

And that’s something you might still be doing anyway, especially when tablets are so cheap. Why buy a Chromebook when an iPad mini or Samsung Galaxy Tab cost just a bit more, or a Google Nexus or Amazon Kindle Fire costs even less?

Well, you might just prefer having a familiar laptop experience, complete with keyboard and trackpad, and if you’re already living the Google life with Docs, Calendar, Gmail, Hangouts, Google+ and more, you’ll immediately feel at home as soon as you sign into a Chromebook. And that’s fine. If that’s you, we think you should consider one.

As a cheap, capable little Ubuntu machine, on the other hand, it has some appeal.