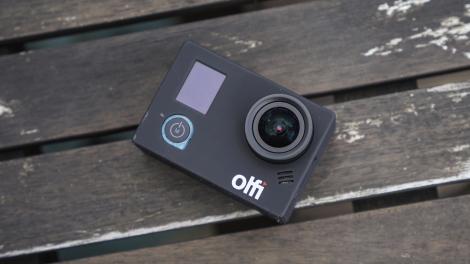 The Olfi makes a good first impression, immediately standing out from the action camera crowd with its approach to packaging. The small semi-hard case contains the camera and accessories, all neatly packed inside. And once the cardboard outer packaging is stripped away, the case that remains is ready to be used, rather than thrown away; it’s similar in quality and design to many aftermarket cases you can buy.

And the case isn’t the only thing that stands out. The branding and design suggest that the people behind the Olfi, action camera specialists Hedcamz, have thought carefully about what they’re offering – and especially about what’s needed to make their product stand out in a crowded marketplace.

The Olfi camera itself packs in some pretty serious features for the relatively low price, starting with the recording options: 4K at 24fps, 2.5k at 30fps, Full HD at 60fps and 720p at 120fps, giving you plenty of scope for shooting everything from scenery to high-impact action.

And these various resolution and frame rate combos all produce good-quality usable footage, which isn’t the case with many similar cameras.

Other features are of the sort we’ve come to expect from action cameras: Wi-Fi for app connection, manual control for adjusting the sensitivity, and compatibility with the standard GoPro mount. The Olfi offers these alongside more advanced options, including a gyro (stabiliser) mode and a high dynamic range (HDR) mode.

The camera itself takes the familiar box-style design, and is almost identical in size and shape to the GoPro Hero4 range, with minimal control buttons and a small LCD screen. Like the GoPro, the Olfi sits inside a removable 30m-waterproof case, with the standard GoPro-style mount underneath ensuring it can be used with all GoPro accessories.

While the basic design of the Olfi is similar to the GoPro Hero4 Black, the layout of the controls and ports is slightly different, with the navigation buttons on the side and the microSD card slot on the bottom of the camera. On one side are two ports: a mini USB for connection to your computer, and a micro HDMI that enables you to connect to a TV or display.

Round the back is the battery cover which, when removed, reveals the 1600mAh power pack. This has enough juice for a good hour and a half of recording time, plus plenty of switching between modes and settings, connecting to the app and reviewing of footage.

The small fisheye lens gives a generous 160-degree angle of view, slightly more than many cheaper action cameras, which are typically around the 155 degree mark. Behind the lens is the well-regarded Sony Exmor-R sensor.

The Olfi feels more solid than the majority of other cameras I’ve tried out – even compared to the GoPro Hero4 the build quality stands up well, feeling every bit as good as the market leader. The Olfi is just over 10g lighter than the Hero4 Black, at 75g compared to 88g without the waterproof housing.

Out of the case the camera feels well made, with a tactile textured effect going around the sides, top and bottom, while the front and back have a smooth matt finish.

The 30m-waterproof case matches the quality of the rest of the camera and features a flat lens, so there are no screws on the outside, which is more evidence of the thought that’s gone into the design. Having a flat lens enables you to quickly wipe it clean, something that isn’t easy with the recessed design of many cases. If necessary the lens housing can be unbolted from the inside.

When the camera is inside the waterproof housing only one of the navigation buttons can be used. This may sound odd, but it’s actually a smart idea, as it keeps things streamlined yet still enables you to navigate through the settings – in this mode the navigation is a carousel action, rather than backwards and forwards.

The lights around the power and shutter button are a nice touch. These flash to show that the camera is recording, which is handy when you’re out on the trail, as the light can just be seen through the case from the top and front. Unfortunately, they are slightly covered by the waterproof casing’s buttons.

Camera operation is straightforward. You power it on by holding down the power button on the front, and after the Olfi logo appears on the screen you’re ready to start recording – unfortunately there’s no quick start option that enables you to power on and start recording in one go.

The shooting mode – stills or video – is selected via the power button; a camera or video camera icon appears at the top left of the screen to let you know which mode you’re in.

The LCD also shows you mode, resolution and frame rate information, the date and time, and the selected angle of view: wide, medium or narrow. These settings can be adjusted using the side navigation buttons.

At present the Olfi app is still in development – when launched it will enable the camera to be connected to an iOS or Android device. There’s also an Apple watch app in the works.

Video quality is good throughout the Olfi’s various resolutions and frame rates. The 4K footage shows plenty of detail and good colour, tone and contrast. At 4K, 24fps is just enough to capture smooth motion in relatively static scenes, such as groups of people.

The 4K video produced by the camera actually has a resolution of 2880 x 2160, rather than full 4K at 3840 x 2160. This is fairly common practice, and when it’s played back most media players will be ‘tricked’ into showing the footage at full 4K resolution; the footage doesn’t seem to suffer for this.

Switching to 1080HD at 30fps the footage again looks good, with even sharpness across the frame and well balanced tone and contrast. Switch to 60fps and you’ll see a slight drop in quality, but if you’re filming action the captured motion is smooth, and can be nicely slowed to half speed.

Drop the resolution to 720p and you have access to 120fps, enabling footage to be slowed further to quarter speed. Again there’s some drop in quality, but the footage is still smooth and clean footage, and produces great-looking slow-motion clips.

Where all action cameras fall down to some extent is low-light performance, and while the Olfi copes better than most, especially when its HDR mode is employed, noise and loss of detail become issues in falling light.

That HDR mode is a stand-out feature, boosting the level of highlight and shadow detail that’s captured, and adding real impact to footage.

Changes in exposure are handled well, with the camera generally adjusting and balancing the light without too much trouble. Riding through woodland, where the light typically changes abruptly and often, the Olfi did sometimes struggle to keep up, but then so would most cameras.

The camera can also struggle in high-contrast conditions – for example, when the ground is in shadow and the sky is bright, sky and cloud detail are prone to burning out.

The small lens captures a sharp image across the frame; zooming footage to 100% and studying the very edges of the frame you will see some signs of chromatic aberration, but it’s nothing to worry about.

The 160-degree field of view produces typical action camera fisheye distortion, which is pronounced, but there is an option to correct this in-camera if you really feel the need.

We’ve seen image stabilisation in quite a few cameras, notably the Sony X1000V and Garmin Virb XE, and in both cases the technology works extremely well. In the Olfi there’s a similar gyro system, and this is also very effective, helping to smooth out the smaller bumps and vibrations.

Attaching the Olfi to a 3DR SOLO Drone revealed just how well this technology works, with image stability improved dramatically, and it was a similar story when the camera was fitted to a bike.

Viewed side by side with comparable footage from the GoPro Hero4, video quality from the Olfi is good at all resolution and frame rate combos; the GoPro does have the edge when it comes to capturing detail and tonal range, but then it is more than twice the price.

The GoPro’s variety of video options also make it the better choice for experienced videographers who want to grade footage post-capture. However, most people looking to create high-quality footage of their adventures will be perfectly happy with the Olfi’s results straight from the camera.

The design of the Olfi is tried and tested, and the quality of both the build and the footage it produces should appeal to anyone looking for a high-quality action camera. The style of the camera and brand is well thought out, and the company has made sure it’s backed by a good selection of its own accessories that will cater to a range of activities.

The fact that the camera breaks free from the usual packaging style, and provides you with a semi-hard case that can actually use, rather than the usual throwaway tower, shows a good understanding of what prospective buyers want.

The whole package is very neat, but there are still a few niggles with the design. Primarily the two lights around the buttons that indicate that the camera is recording are almost completely obsured when it’s used in its waterproof housing.

The auto power off option only has two options, one minute or never – three minutes and five minutes options would be useful, as would an audio signal or beep when the camera starts and stops recording. Auto power on is another feature that’s becoming pretty standard, and the need to completely power up the camera before recording is a just a small gripe.

The Olfi is a serious rival to the GoPro Hero4 Black, but although there are similarities between the two cameras, in some ways they’re quite different.

The Olfi is straightforward to use; it has a few manual options, but in essence it’s designed to enable you to capture the action easily and have fun. The GoPro takes the video options to another level, for which you pay a premium. Its output is also better than the Olfi’s, but it’s a very close-run race when price is taken into account.

The build quality is excellent, and it really feels like the Olfi has been built to last and will withstand a knock or two. Our test sample was ridden over, crashed and spent a good ten minutes in the water inside its housing, and suffered no real effects.

Attention to detail is the major attraction of this camera – it feels like it’s been designed by people who actually use action cameras. From the semi-hard case for transporting it and the two quick navigation buttons to the flat easy-wipe lens housing on the waterproof case, there’s little not to like about it.

If you’re looking for an excellent all-round action camera, the Olfi is the best option for the price right now.