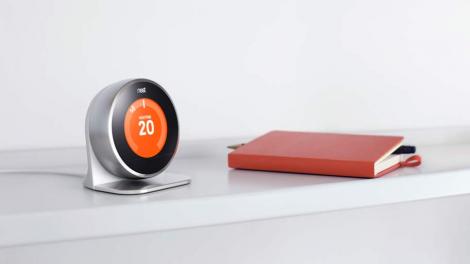 Nest has been making the headlines as the new hot tech for houses and was probably one of the reasons why Apple launched the HomeKit project at WWDC 2014. Its eponymous product is a connected thermostat that promises to cut your heating bills by learning how your household works and adjusting the heating habits (hence the name “Learning Thermostat”).

Nest Gen 2 has been around for more than a year now and finally came to the UK a couple of months ago, much to the excitement of future home enthusiasts and those who want to save money on their heating bill.

Nest recommends that you get the Learning Thermostat installed by a professional due to complications that might arise. The thermostat on its own costs £179 while the cost inclusive of installation was £249.

That’s what Tado, Nest’s biggest competitor in the UK market, charges although you have to pay the setup cost (£50) on top of that. Note that Nest doesn’t offer a rent option whereas Tado offers a rent price of £6.99 per month.

Setting everything up took about an hour and, unlike Tado, I didn’t have to state when I woke up or went to bed every day of the week. The learning algorithm, Nest says, should take care of all this during the first week.

There are two parts to the Nest Learning Thermostat. There’s the thermostat itself, which can be fixed on the wall (in lieu of the existing thermostat for example) or displayed on an optional stand, which is sold separately. In the latter mode, you will need to put the Nest near to a power socket and within reach of your router (you will need Wi-Fi).

The other part is the heat link. This is the component that will control the boiler and communicate wirelessly with the thermostat.

One household can have multiple housing zones, each with its own Nest thermostat and heat link. You will be able to bypass the heat link at any time but doing so will mean that you have to manually turn the heating on and off.

The thermostat’s design is loosely similar to Apple iPod’s click wheel. Not a surprise given that Nest was created by the same guy who designed the iPod more than a decade ago. It is made up of premium material (glass, brushed metal) and has a stylish design that certainly beats your standard thermostat in terms of looks.

The two main components of the thermostat are its display and the ring (think wheel of a combination safe). The former is a 24-bit colour LCD screen with a 320 x 320 pixel resolution; the latter turns orange when heating and a leaf appears when you’re saving energy.

The current temperature is displayed on the outer ring while the target temperature is shown in bold characters in the centre of the display. The sensor window contains temperature, humidity, light and activity sensors.

The ring itself uses a rotate and press/click paradigm, similar to the iPod, to navigate the circular menu and enter data.

Under the display is a a user-replaceable lithium-ion battery plus a motherboard that houses a rather powerful processor, a Cortex-A8 SoC, similar to the one in the iPhone 3GS. Other components include 64MB of RAM, 256MB storage as well as wireless connectivity.

The initial setup consists of getting the thermostat to hook up with your Wi-Fi box and making sure the Nest HQ sees your device.

Then it is just a matter of downloading the appropriate app (available on iOS and Android) and tweaking the setup, something you can also do online via your Nest account.

Note that both the app and the web-based interface share the same screen and functionalities, allowing you to add thermostats or Nest’s own smoke and carbon monoxide alarm (Nest Protect) as well as changing thermostat settings remotely.

Using its array of sensors, Nest adapts to the user’s habits, avoiding heating a home when it is empty, learning how long it takes for your system to heat up and even allowing you to generate energy reports.

If, like me, you work from home regularly and don’t often go in the room where the thermostat is, then you risk ending up with a freezing cold house because Nest will have turned off the heating believing the house is empty.

Also, unlike Tado, Nest doesn’t yet allow users to control hot water when it is heated from the same boiler, but you can control more than one home.

In the UK Nest has already partnered with one utility company, Npower, with the latter giving you a learning thermostat with standard installation if you switch to its Intelligent Fix – April 2017 energy tariff. Expect more to join in or, like British Gas, offer their own version in a bid to lock in customers.

Many have followed Google’s lead in making similar smart thermostats, but given the clout behind that name, and the company’s plans for further home automation, others may struggle to compete.

Will the Nest Learning Thermostat be the replacement for traditional heating systems and become the standard in a majority of homes? Well, it is a desirable product but it is far too early to call it a win, especially if it remains tied to a niche audience.

Its future is bright, however, and if Google can encourage more utility companies to partner with the Nest service then it could become an attractive feature for UK homeowners who want to save on their heating bills.

The Nest Learning Thermostat is well designed, simple enough to operate and pretty much fool proof. It is a masterstroke when it comes to implementing and bringing something as simple as the good old thermostat into the modern digital age.

Its brushed metallic finish means that’s one piece of kit you will be proud to adorn your lounge’s wall. As a first product for a startup, it did manage to get the balance right. The user interface, the app and everything else simply worked.

Energy prices show no sign of going down and in the long term, it is more than likely that a smart thermostat will pay for itself and save you money.

At the end of the day, how much money you save will depend on a number of variables and your mileage will vary. The notion of spending money to save some might not go down well as £249 is still a significant capital investment.

As mentioned, this is the second version of the Nest. The first one proved to be so popular that Google bought it for a fat wad of cash and has pledged to make Nest more of a home gateway rather than just a thermostat.

Nest will face a slew of smart thermostats such as Tado and Evohome from Honeywell and Heat Genius. Expect competition to heat up later this year as more vendors jump on the bandwagon.

But until they come down in price and installation becomes easier, smart thermostats are likely to remain a niche market and a no-go for those who rent or houseshare.