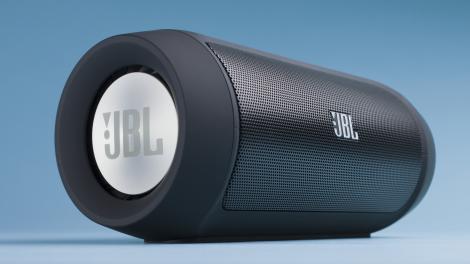 Compact, portable Bluetooth speakers are, frankly, a dime a dozen, thanks to the popularity of big-name options like Jawbone’s Jambox and the Beats Pill. But that didn’t stop JBL from producing the Charge 2. That makes me a happy man, as this easily of the best ever I’ve encountered.

It’s a little bulkier than its aforementioned competition, but if you can deal with the unit taking up a little more space in your bag, the $149 (£129, about AU$170) Charge 2 delivers excellent sound for the size, ample battery life, and even has the ability to sap some of that excess power to charge your mobile devices on the go.

The JBL Charge 2 has the approximate shape of a very large (24oz) energy drink can. Of course, it’s a bit heavier and much more durable in construction.

A hard plastic speaker grille covers much of the front and back, while the rest of the unit – including the panel with the built-in controls – features a silicone shielding. I didn’t try heaving it down a flight of stairs, but the sturdy build seems like it could take the fall and continue cranking out sterling sound as if nothing ever happened.

On either end of the cylinder are passive radiators that help provide the kind of enhanced bass that you can see – quite literally. They’re suspended in place by rubber connectors and visibly pulse and vibrate while playing music, which is a curious sight for such a small unit.

As with the company’s recent JBL Synchros E40BT headphones, the huge logos on both ends seem a bit excessive (in addition to the smaller one on the front), but beyond the standard black model, the color options – including blue, red, and purple – are very attractive.

You’ll tap into the Charge 2 with your smartphone, tablet, or other device wirelessly via Bluetooth 3.0. There were, however, a few occasions in which my device wouldn’t connect immediately to the speaker, requiring me to dig into the settings to manually activate the pairing. It was only a mild annoyance, but worth noting nonetheless.

For a relatively compact, battery-powered speaker, the JBL Charge 2 really does impress with the quality of the audio it delivers from its two 1.5-inch drivers.

Compare it to the solid sound of the compact Jambox and the difference is immediately noticeable: The Charge 2 offers enough audio to fill a small room without significant distortion – so long as you’re not cranking it at full blast. It’s still a small speaker, after all.

The most notable positive comes with its nicely differentiated range. This allows you to clearly hear both the rumbling bass separate and the soaring treble, with plenty of mid-range to help deliver a harmonious signal.

Much of that is due to the aforementioned passive radiators, which help create a larger bass sound than you’d expect from the size. But thankfully, it doesn’t come at the expense of the rest of the sound spectrum – many speakers of this size struggle with bass, so the result here of the enhanced low end is a nicely balanced effort.

Again, the JBL Charge 2 is bulkier than the Jambox and the Beats Pill, and there are much more compact Bluetooth speakers on the market. But JBL’s device provides an aural upgrade that you can actually hear. If you can handle a little more heft in your bag, it’s well worth it.

Beyond the great sound, the JBL Charge 2 wins praise for going above and beyond as a portable speaker. Within the sturdy unit beats a sizable 6,000mAh battery that offers an estimated 12 hours of playback, which matched up almost precisely with my testing.

If you’re out and about and need a quick charge, you can simply plug your smartphone or tablet directly into the unit’s USB port and pull from that built-in battery reserve. Granted, doing so will knock out some of those estimated playback hours. But, when in need, it’s an incredibly helpful feature to have.

The Charge 2 also has a social play option that allows up to three devices to be paired at once, letting a few local friends alternate control of the speaker at will. It’s a minor perk rather than a big selling point, but in a shared apartment it could come in handy.

And finally, thanks to the built-in mic and a phone-centric button for responding to calls without touching your device, the Charge 2 works as a pretty decent speaker phone, too. Echo and noise cancellation make that a very useful added perk, and it’ll surely be a selling point for some prospective buyers.

The JBL Charge 2 represents real improvement in an over-crowded genre. It’s bulkier, sure, but the trade-off comes with handy features like the ability to charge your phone or tablet, as well as speakerphone functionality.

The Charge 2 won’t hide away as well in the corner of your bag. If that’s your prerogative, then go for the Beats or Jawbone options. For fans of excellent sound quality and battery life, JBL’s latest comes highly recommended for both the size and price.