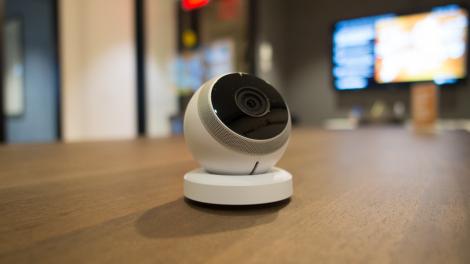 Investing in a home security camera is a wise move if you want to protect your family and valuables. But after you buy one and set it up, that’s about all there is to do with it. That is, until something bad happens and you need to drudge through hours of footage. It’s not a purchase known for offering any bit of fun. Some might argue that to have “fun” isn’t why people buy security cameras, but Logi begs to differ.

The $199 (£159, about AU$274) Logi Circle operates in a similar “set-it-and-forget-it” fashion as other options, but that’s where the comparison stops. Its design and companion app are full of engaging features that make filtering through the day’s happenings much easier and, dare I say, more fun than any other home security camera on the market.

The Logi Circle starts off on a good note with its simple, unobtrusive design. Its friendly look is the first step in Logi’s campaign to brush off the stigma that home security has to be so serious. It reminds me less of something that, say, an airport would use, and more like one of those hilarious, killer robots from Portal.

The curvy body of the camera is made of matte-textured white plastic that meets with a slick, metallic ring, which covers up its omni-directional microphones. The front-facing section makes the jump back to plastic and is visually accented with a camera lens in its middle. What’s a little difficult to see (unless the camera is on) is the LED indicator at the top of the circular, black area.

This camera is fixed to a stand, which gives it stability and allows it to tilt forward and backward with about 90 degrees of freedom. It’s enough freedom that you could easily mount the Circle onto a wall, or do as I did and set it on top of a flat surface. Should you want to mount it, Logi provides all the adhesive and screws that you’ll need to do so.

Inside the box, Logi includes a dock, which feeds the Circle its power. That’s not to say that you can’t go dock-free and move the camera about your house. It’s just that it isn’t a habit that I recommended getting into, since the internal battery can’t survive much longer than a good night’s sleep. There’s really no reason to, especially since the USB cable, which stretches to 10 feet in length, is long enough to reach the nearest power outlet in your living space no matter where you want to install the Circle.

The Logi Circle is managed completely through its companion app, available on Android and iOS. It allows you to make several adjustments to the camera, even when you aren’t home. You can do standard stuff like zoom in and out on the feed, turn off the LED indicator, and mute the microphone. One especially neat feature allows you to chat into your phone, allowing whoever is in the vicinity of the Circle to engage with you in a convenient, albeit limited conversation. This seems most ideal for a practical situation like like spooking a pet off the couch or chatting with your babysitter.

The very nature in which the Logi Circle records is a bit different from other solutions out there. In an effort to eliminate useless footage, the camera only saves clips of video where things happen. Be it a fluctuation in visual or audible activity, that’s the only content you’ll be able to pilfer through on the app.

It’s a bit of a bummer that the app ditches any unsaved clips at the turn of each day by default, but it’s a choice that incentivizes me to take the time to look through each clip. When I received the review sample from Logi, I wasn’t too concerned with monitoring my valuables. My partner and I recently adopted a cat, and I instead watched the clips to see how it was adjusting to life at home alone. For that use, it was perfect.

I’ve talked already about how Logi’s Circle camera is supposed to perform, but what matters is how it actually performs in the field. Though it doesn’t set out to play on the same plane as more comprehensive options, I’m delighted that this camera does exactly what it sets out to do, and does it well.

Setting up the camera is a cinch. First, find where you want to position the Logi Circle. Then, once it’s connected to power, download the app and the camera will join your Wi-Fi network, which allows it to beam footage to the app, no matter your location. While on a weekend vacation in Louisville, KY, I could peer into my NYC apartment.

Its camera sensor is capable of high definition capture in both light and dark rooms. When the lights go out, it automatically flips on night vision mode. Speaking on the video quality, it doesn’t look sharp enough to be 1080p, but even so, both the live feed and recorded footage look nice on the app.

The interface of the app is user-friendly, lining up the day’s clips in a scrollable wheel along the right side of the screen. If the event took place during the day, the circle is green. If it took place at night, it’s translucent. Of course, you can take a peep at the live feed to see if anything’s happening at the moment.

Perhaps, the coolest feature packed into the app is called Day Brief. It’s for those who are short on time, and want a TL;DR version of what happened during the day. At the press of a button, every saved clip from the past 24 hours gets smushed into a 30-second clip that plays like a GIF. It’s fun to watch the sun come up, then go down and see you and your loved ones moving at the speed of life.

The Logi Circle is the ideal home security solution if you’re looking for a fun, interactive way to keep an eye on the happenings inside of your home. Its simple setup and the app’s ease of use even extend a hand to those who aren’t too tech savvy.

I imagine that security experts wouldn’t recommend this camera because of its lack of constant recording capabilities and comprehensive backup options. But the Logi Circle isn’t made to defend Fort Knox. Its design puts the focus on all of the fun things that happen around your home, with the peace of mind of having a camera watching over you as an added bonus.