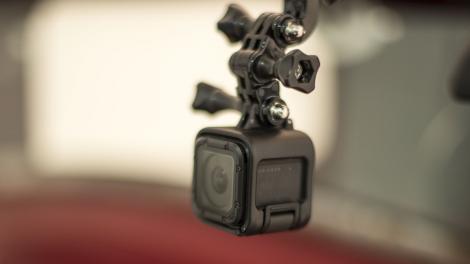 The simple square box style has been growing in popularity for action cameras, and with the HERO4 Session GoPro becomes the latest manufacturer to launch a camera of this style, following the likes of Polaroid’s Cube and Cube+, and the Rollei 500 Sunrise.

The design certainly has its advantages – it’s 50 percent smaller and 40 percent lighter than previous HERO4 cameras – and it incorporates other improvements as well: the Session is waterproof to 10 metres without a housing, and a simple one-button operation makes capturing the action easier than ever.

There’s little to fault with the design of the Session. The small size of the camera, encased within a skeleton frame, makes mounting and positioning it easier than ever. The camera can be rotated within the frame to the correct orientation and this, coupled with the auto orientation feature, ensures that your footage is always the right way up, which can be a major time-saver when it comes to editing.

On the back of the camera is a small button which, when pressed, displays settings and status information on the small LCD next to the shutter button. The back button also activates the Wi-Fi function and tags footage, depending on the camera’s status.

On the side of the camera is a pop-out flap that gives access to the MicroSD slot, and a Micro USB port for charging the built-in battery. The flap is held in place by a small catch that, despite my best efforts, seems impossible to accidentally release.

The connections are stripped down compared with the GoPro HERO4 Black, so there’s no mini HDMI port; this is no bad thing, however, and it follows the trend in most recent action cameras.

The Session comes in two versions, Standard and Surf, the only difference between the two being the selection of mounts included in the box. Both ship with a new ball joint buckle mount that enables 360-degree camera rotation, making it ideal for helmet and bike mounting.

The Session needs to be placed inside the included frame in order to be mounted; a pressure lever holds the camera firm. At the base of the frame is the standard GoPro mount, which is compatible with the majority of GoPro accessories. This frame and the new ball joint buckle also enable low-profile mounting, a welcome innovation compared with the more traditional GoPro accessory mounts.

You need to pair the camera with your iOS or Android device and use the GoPro app to access the full range of shooting modes and settings. Wi-Fi is activated by scrolling through the options using the Wi-Fi/Info button on the back of the camera, and pressing the shutter button to confirm.

Wi-Fi setup and pairing is straightforward, and the app gives you access to a variety of options and modes – you can adjust the resolution, frame rate and camera modes, and remotely operate the camera and live view. Selecting and adjusting these settings is similarly fuss free.

All video is recorded in H.264 codec in the .mp4 file format, making it fully compatible with most popular editing applications, as well as with the excellent GoPro Studio. Video buffs can also make use of the ProTune settings, which facilitate control over sensitivity and sharpness.

Adjusting settings via the GoPro app is quick and intuitive, and you can check settings by switching to the remote control feature. The app also features live view, so you can quickly check composition and exposure, and adjust settings as needed.

The interface features a large start/stop record button, and additional icons enable you to change modes quickly. The app also enables you to play back footage, and you can upload footage direct to the GoPro community.

GoPro cameras have become known for their high video quality, and the Session is no exception. Once connect to the app, the camera gives you a good selection of resolutions to choose from, and while these might not be the headline-catching 4K’s of the HERO4 Black, they will enable you to edit and view your footage smoothly on a home computer.

The visual quality of the footage is excellent, with bright punchy colours and sharp detail. The lens gives the standard fisheye perspective, and looking at the footage there are no pronounced signs of detail becoming soft toward the edges, or signs chromatic aberration.

Colours are reproduced well, and tend to lean towards oversaturation. This gives the footage a bright, clean look; there’s a slight blue cast in some lighting situations, but it’s not something you’re likely to notice unless you’re looking for it.

Exposure is well controlled in good lighting conditions, and the Session copes well when moving from shade to bright, adjusting the exposure quickly and smoothly.

Shadow and highlight detail is nicely balanced, and while there is some highlight burnout in bright clouds, the tonal gradation between bright areas that contain detail and burnt-out areas is smooth and free of colour casts, so that when the footage is rolling, the burnt-out areas aren’t unduly prominent.

The quality of the live view stream via the app is good, although necessarily dependent on the strength of the Wi-Fi signal. In good conditions the stream is smooth, with less than a second’s delay between the action happening and it appearing on screen.

In tests we found that the range was limited to around 10 metres, which is perfectly adequate – with action cameras, live view is generally a tool for checking composition, rather than for remote recording.

Although the Session enables you to tag footage as you record, this function seems rather limited compared with the much more user-friendly approach taken by TomTom.

One issue I encountered when using the Session was the length of time between the record button being pressed and the start of recording – this could be in excess of five seconds, and it turned out to be an issue with the MicroSD card.

After a little experimentation with cards from several manufactures, I found that if I stuck with cards from Lexar or SanDisk, as recommended by GoPro, the delay between hitting the shutter button and the start of recording dropped to just over two seconds. It seems that, like the Sony X1000V, the Session is a little picky over the quality of the cards you use.

Even though the Session is 50% smaller than the HERO4 Black, it still manages to compare favourably when it comes to battery life. In our tests, with Wi-Fi switched off and shooting 1080p at 60fps, the camera comfortably captured an hour and a half of video.

As with other GoPros, the HERO4 Session can be mounted on just about anything, including the dog. This clip also shows the Session coping well with a bright sky

As we’ve come to expect from GoPro, image quality from the Session is excellent, with well-balanced shadow and highlight detail, and punchy colours.

The Session’s 10-metre waterproof rating means it’s easily able to cope with a quick dip in the surf.

The GoPro HERO4 Session builds on the success of the HERO series. Its small size, and the ability to use the frame and ball joint bracket to enable low-profile mounting, will appeal to extreme sports enthusiasts. The simple one-button operation is a nice touch, and the small screen showing that video recording has started might be simple, but it’s also reassuring.

As with the rest of the HERO range video quality is very good, and the GoPro app gives you plenty of control over settings.

The Session offers a great deal, but it would be good to see some more advanced features, such as 1080p at 120fps in line with the HERO4 Black. With the likes of the TomTom Bandit enabling quick and easy editing and uploads, you’re left feeling that the Session good give you a little more for you money.

The new cube design, frame and ball joint buckle mount make this GoPro the easiest to use and mount yet. Wi-Fi connectivity is easy to set up and use, and video quality is as good as from any action camera on the market.

The big issue with the Session is its price, especially when compared to competitors – it’s hard to shake the impression that you’re paying a hefty premium for the GoPro brand. You’re also relying heavily on the app for adjusting key settings.

GoPro is still the dominant force in the action camera market, and with the launch of the Session it shows that the company is willing to innovate to stay at the top.

The Session’s small size, box design and simple operation make it an ideal choice for those who want to capture the action with the minimum of fuss.

However that same simplicity of design and operation limits your ability to change settings without the use of the mobile app, and the price makes it hard to justify when compared with stiff competition from the likes of TomTom, Garmin and Veho.