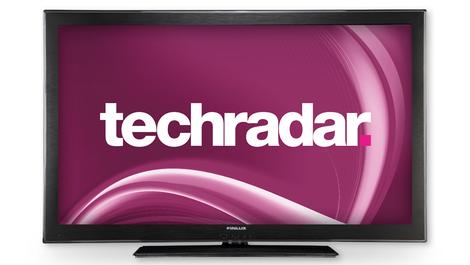 About £400 is what we’d judge most people count on spending on a normal TV with no flashy features, but get to the shops and there’s always something else that bumps up the price. Maybe smart TV apps, 3D, Full HD or LED backlighting edges the costs up, so much so that a decent cheap TV isn’t easy to find.

Step forward Finlux, for long a brand associated with basic TVs most often found in supermarkets. Nervous? You shouldn’t be. That £399.99 (around US$606/AU$578) price tag is the big attraction on the Finlux 32F8030-T, but somehow this 32-inch TV has three of those four price-pushers – LED backlighting, a Full HD resolution and smart TV apps – onboard by default. 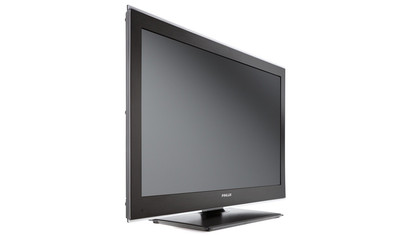 We’ve seen false dawns before, where TV manufacturers promise all the latest features only for usability and quality to be non-existent. Even LED backlighting isn’t a badge of quality – we’ve seen plenty of ropey TVs that promise the latest picture tech but in use blur, smear and leak light from around the edges of the panel.

Not so the Finlux 32F8030-T, which piles on the value in plenty of other areas, too. Its four HDMI inputs are something that TVs costing twice – or more – as much often fail to deliver, while its two integrated Scarts will appeal to those with legacy kit. Here, too, is a Freeview HD tuner, USB recording and even a thoroughly usable remote control. Yes, that last one surprised us, too. 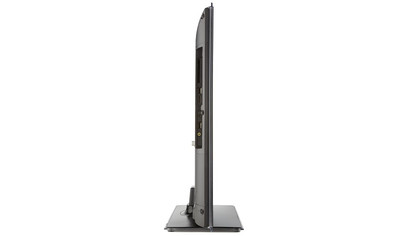 It has an 8mm wide rim of transparent plastic around it, but the bezel itself looks like it’s made of brushed metal. It’s really very effective, its subtle scratch-look texture catching the light nicely, while a Finlux logo sits above some barely visible manual touch-sensitive controls (which even include an input changer, channel toggle and a menu button).

That’s crucial because that bezel is rather wide at 34mm, while in terms of depth the Finlux 32F8030-T measures 40mm.

Add access to BBC iPlayer and YouTube – via a bundled Wi-Fi dongle, no less – and a decent, contrast-heavy picture, and the Finlux 32F8030-T is one of the best value 32-inch TVs available. 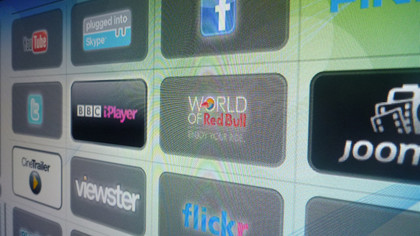 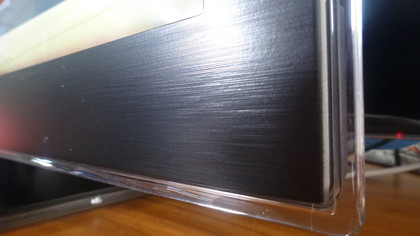 We don’t underestimate how good value a proposition the Finlux 32F8030-T’s combination of Full HD, Freeview HD tuner, Wi-Fi and LED backlighting is, but there’s more here – much more.

The headline feature on such an affordable TV is a smart TV portal. It’s presented nicely, with a thumbnail of the live source – be it the built-in TV tuner or, say, a connected Blu-ray player – displayed, with sound, above two feeds – one for Facebook and one for Twitter. 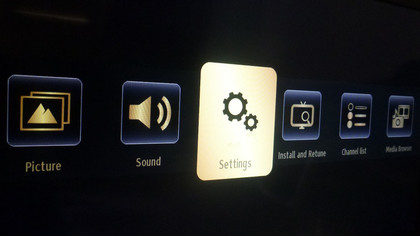 The big worry is the lack of any movie streaming apps, such as Netflix, Lovefilm, Now TV and Acetrax, especially since they’re increasing in popularity and importance.

You could also argue that most of this TV’s apps will never be used, but we’re happy to give our stamp of approval to anything hosting BBC iPlayer and YouTube – by far and away the most important two smart TVs apps.

Where the Finlux 32F8030-T scores highly elsewhere is primarily with its ins and outs. Almost unique in the market are its two Scart connections; once common, they’ve disappeared since the HD-ready age kicked off, but those with older DVD players might appreciate them. However, it’s probably a feature that will be used more heavily elsewhere in Europe. 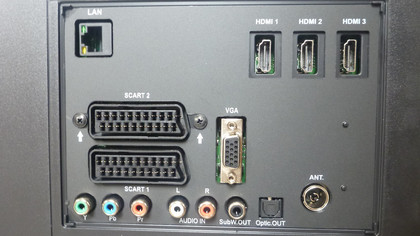 Of more universal use is the Finlux 32F8030-T’s four HDMI inputs. Now that is impressive – as is the provision of both a digital optical output and a subwoofer output, the latter of which is very rare to see.

Wired LAN, a VGA input for a PC, component video and a set of phono inputs are also found on the TV’s rear, while a side panel presents two USB slots, the fourth HDMI slot, a composite video input, a Common Interface slot and a headphones jack.

Though with limited opportunities to tweak the picture, the Finlux 32F8030-T uses bizarre parameters for adjusting contrast, colour, sharpness and so on – instead of 0-100, the sliding scale goes from 0-63.

The Finlux 32F8030-T’s biggest problem is its native 50Hz panel, but if you can live with a modicum of blur and judder, it’s another all-round great value performance.

The Wonders of Life on BBC1 HD impresses both with natural colour and detail, although the gorgeous photography is slightly marred by judder during camera pans. 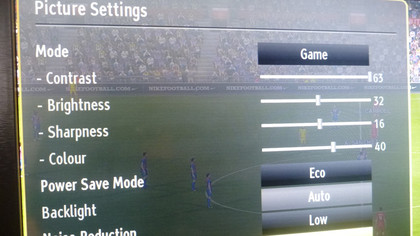 It’s the same story with our Blu-ray test disc Hugo spinning, with detail upped even further, and black levels surprisingly deep. The sweeping opening shot across the platforms and foyer of the station reveal enough shadow detail, though that endemic judder is obvious.

In mixed brightness sequences, peak whites can seem overly saturated and lacking in detail, but that’s a minor gripe. 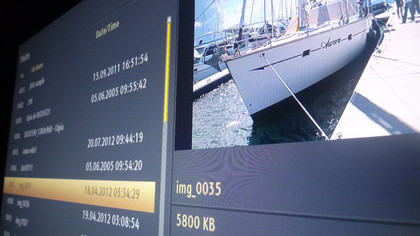 Overall, the Cinema preset (others include Natural, Game, Sports and Dynamic) is primed for action.

Standard definition channels are handled well, always remaining clean – and the same goes for digital video files – though when we engaged our aging DVDs of The West Wing we did notice some overly rosy faces in the Oval Office. 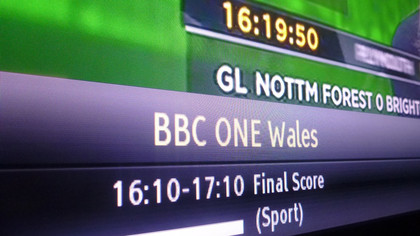 However, the most impressive part of the Finlux 32F8030-T picture is the consistent brightness across the whole panel; unlike many cheaper LED-backlit TVs, there’s not a trace of LED light leakage when viewed in a blackout.

It may lack ultimate finery, but there are few picture performances as good value as on the Finlux 32F8030-T.

Although the overall user interface – which hangs around a simple Picture/Sound/Settings/Install & retune/Channel list/Media Browser carousel of icons – is very easy to use, one of the major weak points of the Finlux 32F8030-T is its electronic programme guide (EPG).

In terms of design, we’ve got no issues with it. Schedules stretching to two hours are shown for nine channels simultaneously, while selecting programmes to either expand upon or record (to a USB flash drive or an external HDD) is easy. 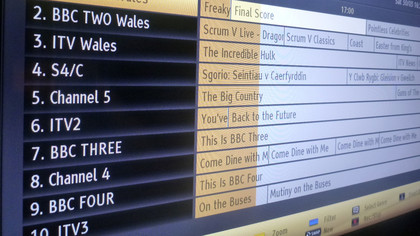 The problem comes from the fact that when you engage the EPG, all sound and pictures of the current channel you’re watching cease. It reminds us of how Panasonic EPGs used to be until very recently, though the absence of a thumbnail of live TV in the EPG screens is a huge shame. Who wants to browse what’s on later while sitting in silence? Nobody.

Smart TV can be a tad slow to fire up, hanging a few times when we tried to load it. And multitasking isn’t possible – a dual-core smart TV this is not. 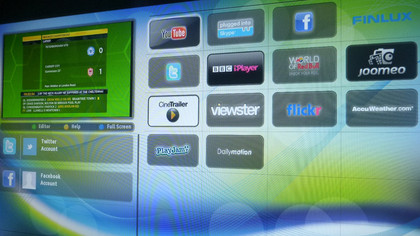 The Media Browser software meets our minimum standards in a similar fashion. In our test we played all common formats of digital music and movies with the exception of lossless formats and MKV video files. 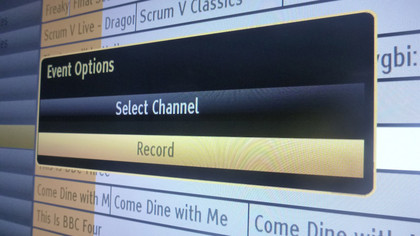 That’s a shame, because it’s a fine remote indeed – nicely spaced out, oversized buttons with a well thought out design of shortcut buttons to new services.

It’s not perfect – we didn’t immediately click that buttons with a TV and book icons translated as a shortcut to the EPG, nor that a graphic of a star and a CD led to YouTube. 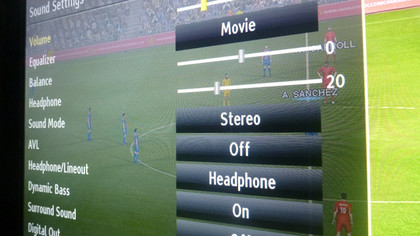 The Finlux 32F8030-T’s stereo 8W speakers are another of its major weaknesses. That’s in no way unique – almost all flatscreen TVs disappoint in this area – but here there’s just so little width or depth that anything but dialogue-based TV lacks impact.

There are a few audio presets, such as Movie, Speech, Flat, Classic and Music, but only the latter makes any kind of stab at low frequency sound. 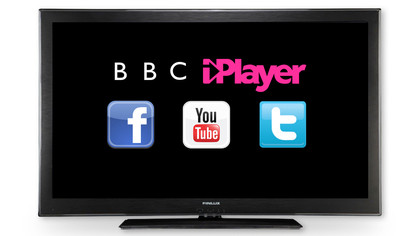 Having been slashed down to a sale price of just £299.99 in recent months, we’ve no complaints about the Finlux 32F8030-T in the value stakes.

We shouldn’t get carried away – the Finlux 32F8030-T is a cheaply built everyman TV set that’s not as impressive as the polished efforts from the likes of Samsung, Panasonic and Sony. 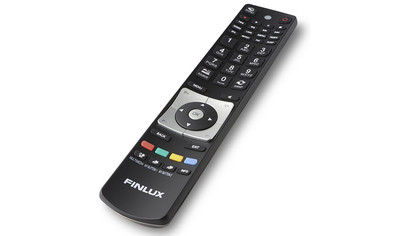 However, the provision of a throughly decent smart TV portal at this price is remarkable, and though it’s a portal that hinges almost entirely on BBC iPlayer, we’re wiling to bet that this particular app far outweighs any other in terms of popularity and use even on much more comprehensive smart TV offerings.

The inclusion of a Wi-Fi dongle is a wise move indeed, though using it does mean only one of the Finlux 32F8030-T’s brace of USB slots is available.

The Finlux 32F8030-T has to be one of the best value TVs we’ve ever tested. There are a few clues here and there that’s it’s built around last year’s tech – the lack of a dual core, a lifeless EPG, and limited video codec support, perhaps – and it’s not always a joy to use, but as a step-up TV for the living room it barely puts a foot wrong.

The low price is top of the list, of course, but we got on well with the BBC iPlayer and YouTube-equipped Finlux smart TV platform and were impressed by the remote control’s design and build quality, too. Four HDMI inputs is a fine return at this price, as is the bundled Wi-Fi dongle, though we’re also sure that its twin Scarts will have a wide appeal in the UK – as will its brushed metallic look.

All of this would be for nothing if it weren’t for the Finlux 32F8030-T’s reliable images, which are surprisingly advanced and consistent.

There is no dual-core processing on the Finlux 32F8030-T, which does take the shine off smart TV, which isn’t as quick as other platforms and lacks film streaming apps. Having app shortcuts on the remote is handy, but some are confusing and there’s no button for BBC iPlayer.

Engaging the EPG plunges the entire TV into silence, which most other brands have moved on from, though that’s nit-picking; the real issues on the Finlux 32F8030-T are its poor audio and its 50Hz panel, which does mean a constant, albeit slight, blur and judder during fast-moving action and camera pans.

With Full HD, Freeview HD and those four HDMIs on offer, the Finlux 32F8030-T is terrific value, though just as important are its naturally coloured, contrast-heavy and richly detailed pictures that don’t suffer from the kinds of problems we’d expected to see.

There is, however, a slight issue with judder that won’t go away, and the lack of dual-core processing makes smart TV a box-ticking exercise rather than an unbridled joy to use. That’s being harsh, though, because the user interface is mature and easy to use, and by adding the likes of Netflix, Now TV and Lovefilm to its smart TV interface, Finlux could have a hit on its hands.

OK, so the Finlux 32F8030-T has a poor EPG and the audio is terrible, but that’s pretty normal even on big brand’s 32-inch TVs; we’re all going to have to think wisely in future about spending a penny over £300 on a smart TV of this size.

Despite being very cheap for a TV with smart TV apps, the Finlux 32F8030-T isn’t the cheapest 32-inch TV around. Even the big brands can get lower, notably Samsung with its UE32EH5000. It’s not got any semblance of smart TV or streaming but it does deliver good picture quality as cheaply as humanly possible.

An even starker budget attempt is the Technika 32-270, though we’re into the realm of cheap-and-looks-it territory there. If you’re after smart TV, you can find a similarly basic effort on the Toshiba 32RL958, another bargain-busting ‘trickle-down’ LED-backlit LCD TV that boasts Freeview HD and clean images from all sources that have plenty of detail.