While the Nikon Z7 might be grabbing all the headlines, Nikon’s other new full-frame mirrorless camera, the Z6, is perhaps going to have the broader appeal, especially amongst enthusiast photographers.

Nikon is adopting a two-pronged strategy similar to that employed by Sony when it launched the original Alpha A7R and A7. The Nikon Z6 and Z7 share the same design and a pretty-much identical spec sheet, with three notable differences – resolution, autofocus and burst shooting speed – and with the Z6 marketed as more of an all-round camera compared to the high-resolution Z7.

We got our hands on a pre-launch model to see if all the fuss has been worth it.

While the 45.7MP Z7 is Nikon’s high-resolution mirrorless offering, the Z6 features a back-illuminated 24.5MP full-frame sensor with a native ISO range running from ISO100 to 51,200.

Like the Z7 the Z6 features Nikon’s new Z mount, with Nikon having dropped its long-established F mount for its new full-frame mirrorless cameras. The mount opening is 11mm wider than the F mount at 55mm, while the flange focal distance (the distance between the rear lens element and the sensor) is 16mm.

Nikon believes the larger design and short flange distance will enable its lens engineers to design optics that surpass current F mount designs and make the most of the full-frame sensor, allowing light to easily reach all the way to the corners of the frame. 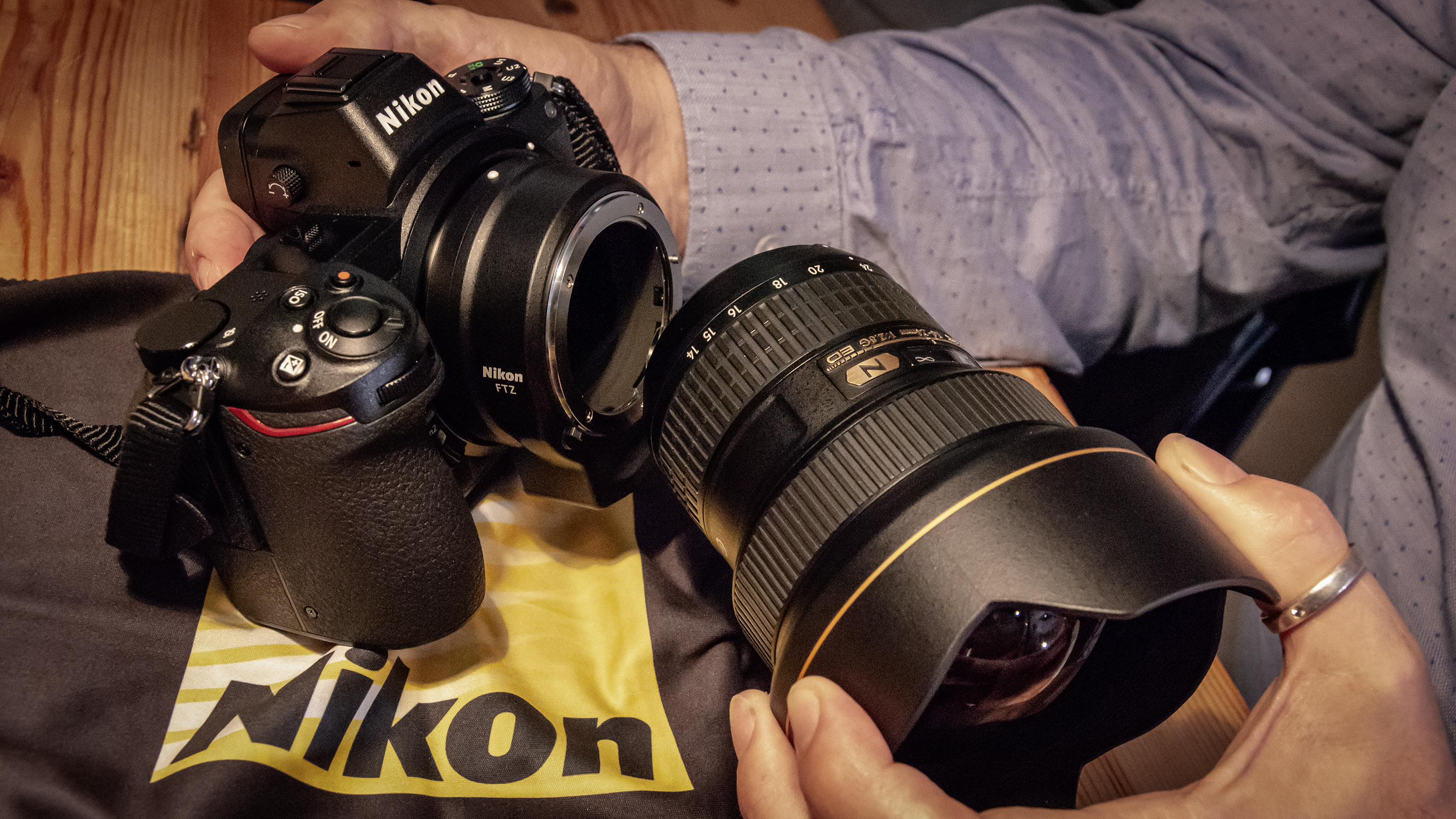 For existing Nikon users who are looking to make the switch to the new mirrorless cameras, or who want to shoot with one alongside their Nikon DSLR kit, there’s a new FTZ Mount Adapter that will be compatible with approximately 360 Nikon lenses, and will support the Z6’s full AF speed with over 90 lenses.

The Nikon Z6 features a 0.5-inch 3.6-million dot Quad-VGA electronic viewfinder (EVF) with an impressive magnification of 0.80x, which edges out the Sony Alpha A7 III’s 2.36-million dot and 0.78x display. The Z6 also uses Nikon’s own optics, which are supposed to deliver even greater clarity, while the EVF has a fast display rate of up to 60p.

Supplementing this is a large 3.2-inch tilt-angle touchscreen with a 2,100,000-dot resolution, while the Z6 also benefits from a compact top plate LCD displaying key shooting information.

While Nikon’s DSLRs use a lens-based image stabilization system (which Nikon calls Vibration Reduction), for its new mirrorless cameras it’s opted for an in-camera system, with the Z6 featuring a 5-axis system that offers up to five stops of compensation. For those wanting to use their F-mount VR lenses on the Z6 via the mount MTZ adapter, the camera’s built-in VR system will adjust itself to support the lens-based system.

There’s also an electronic Vibration Reduction system (known as E-VR) designed to reduce the impact of camera shake when shooting movies handheld; speaking of which, the Nikon Z6 can shoot 4K UHD video up to 30p, while there’s also the option to shoot Full HD video in 60p and 120p slow-motion footage in HD format.

Like a host of other recent Nikon cameras, the Z6 features the company’s fairly clunky SnapBridge image transfer system. This uses a low-energy Bluetooth connection between the camera and your smart device (via the free app), with images downscaled to 2MP and transferred from camera to device as you shoot. If you’d rather get your hands on the high-res images, you can individually select them in-camera, with a Wi-Fi connection established if you opt for this method. Alternatively, the Z6 will offer an open Wi-Fi connection if you want to sidestep SnapBridge. 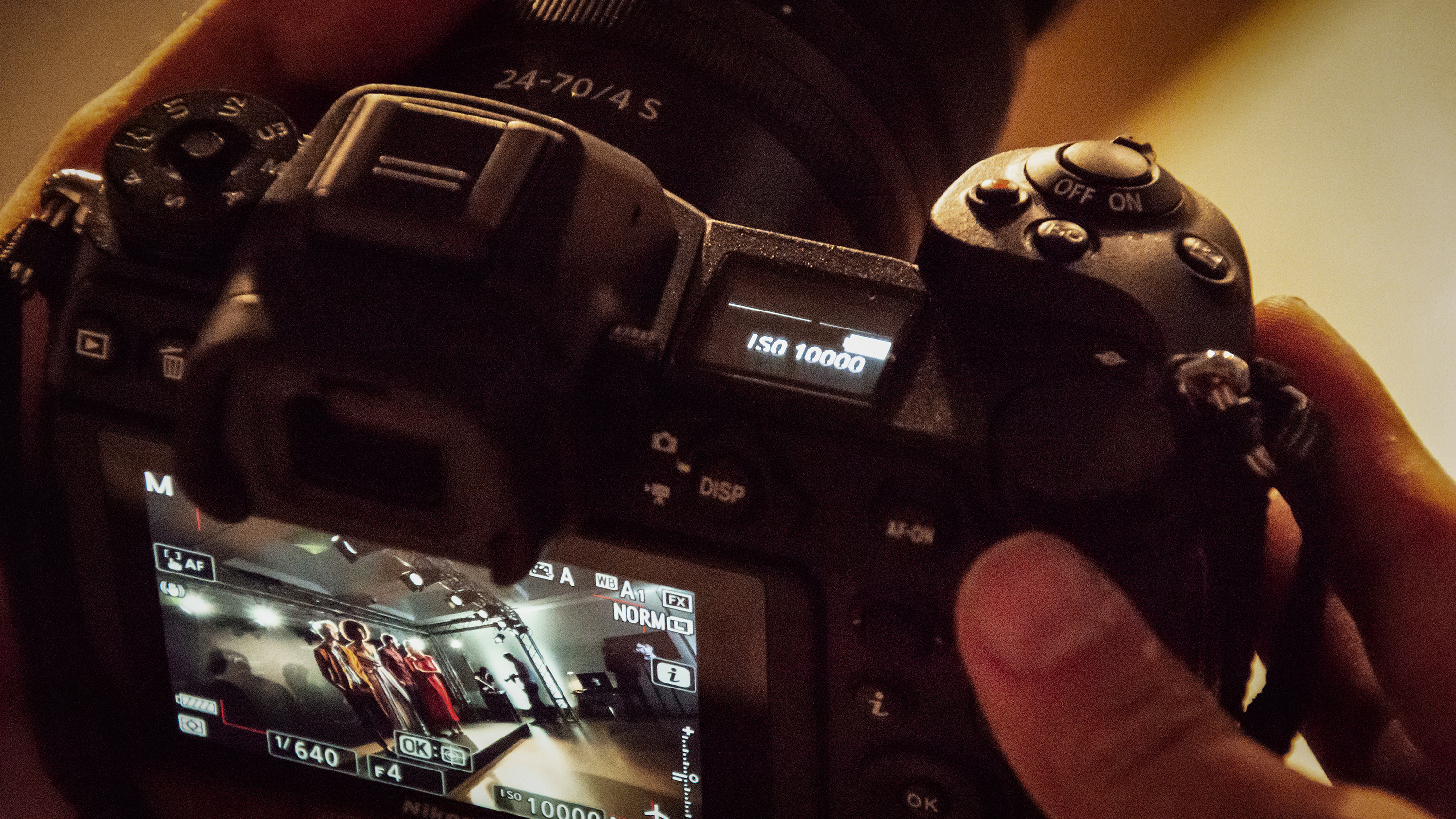 While you might expect to find a couple of SD card slots on the Z6, Nikon has opted for a single XQD slot. This is quite a brave move considering the limited availability of XQD cards, with just Sony versions currently available (although now that Lexar is back up to full production we could see its range of cards make a comeback). The performance advantages are clear though, and Nikon’s hope is that once CFExpress cards (essentially an update to the XQD memory card, and with more manufacturer support) become more widely available, this will be the more future-proof solution.

The Nikon Z6 gets a new rechargeable Li-ion battery, the EN-EL15b, but the camera is also compatible with the EN-EL15a battery used in the likes of the D850; however unlike the older unit the EN-EL15b supports USB charging. Disappointingly Nikon only quotes a 310-shot battery life, 400 shots down on the Alpha A7 III‘s 710 shots; apparently in real-world use you’re more likely to get around 600 shots, but we’ll have to put that to the test ourselves. 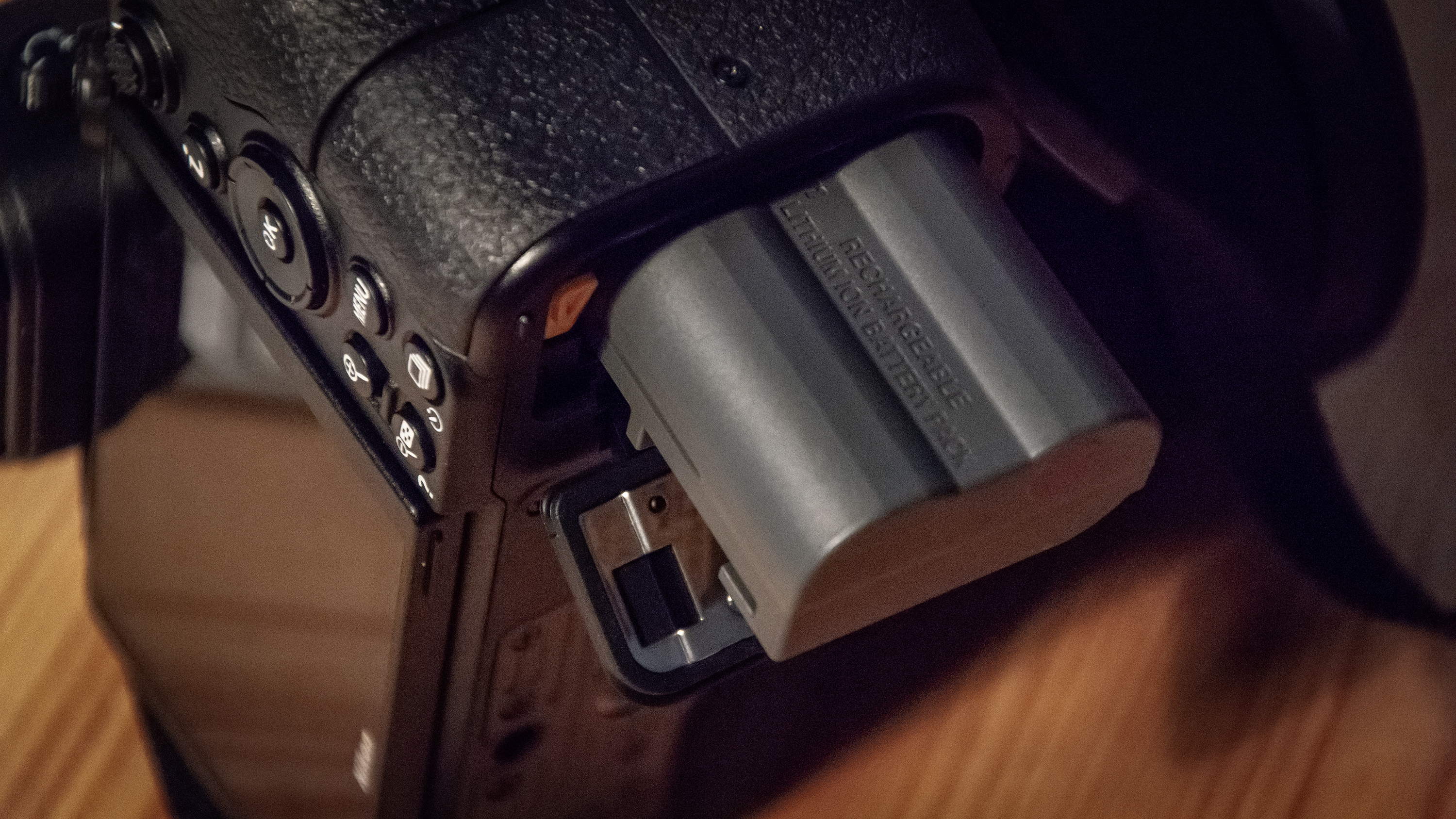 While some standout Nikon DSLRs, like the D4 and D800, have been penned by design agency Italdesign, the Z6 doesn’t quite hit those heights, sporting a more functional look.

It’s not about how the camera looks though, and the design means it fits nicely in the hand when you pick it up thanks to the large and comfy handgrip. For those thinking of swapping from their Nikon DSLRs, the transition to the Z6 should be seamless thanks to the familiar controls and button placement, while Nikon claims the Z6 has the same level of weather sealing as the D850.

The same goes for the Z6’s user interface, which offers a design and navigation that will be familiar to users of Nikon’s current range of DSLRs, with the various sub-menus running along the left-hand side of the display. 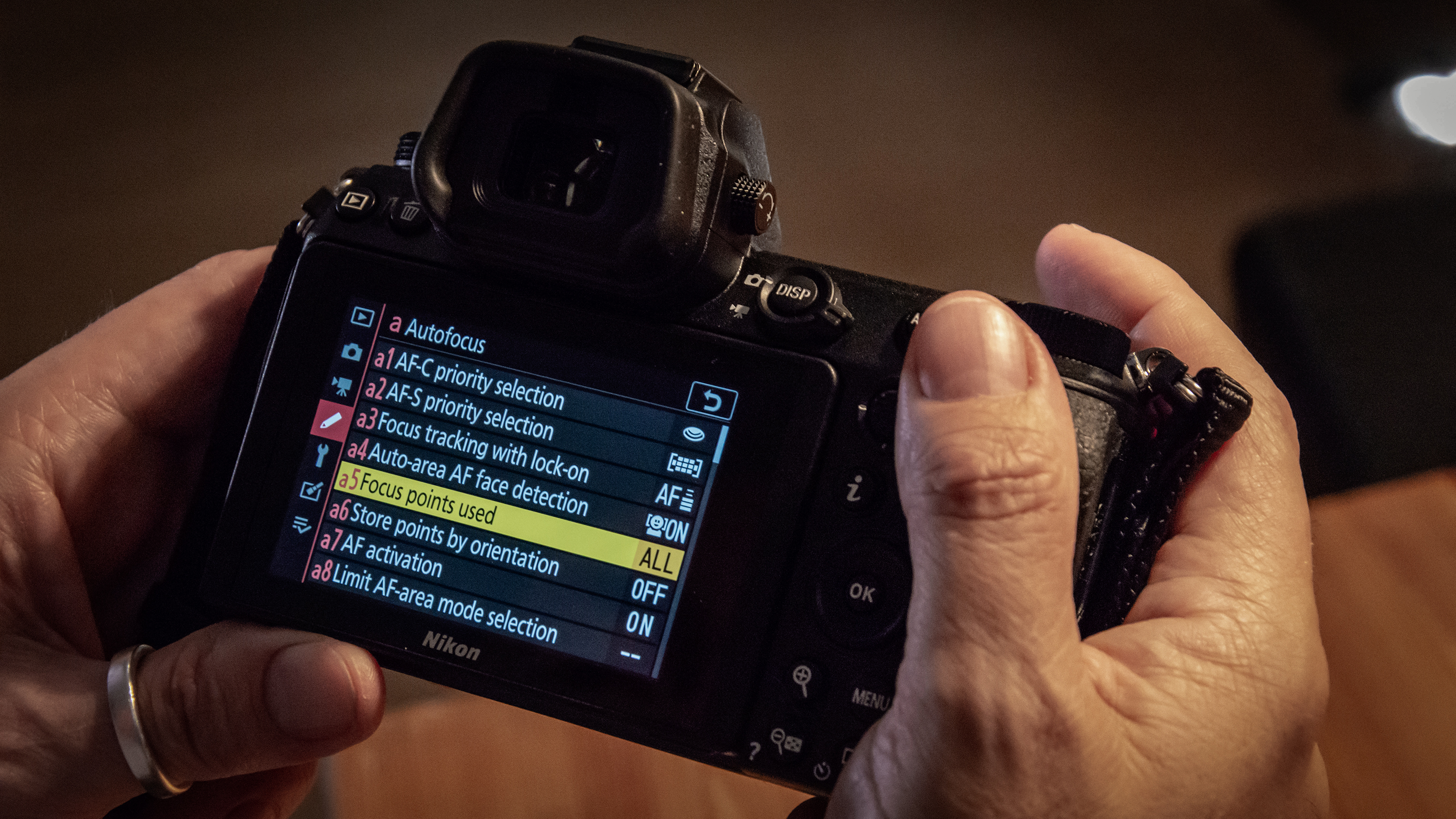 Coverage is across 90% of the frame, which viewed in isolation looks to be very comprehensive, but it’s slightly lacking compared with the Sony Alpha A7 III’s 693-point AF system, which offers 93% coverage.

The Z6’s Single AF mode features a choice of Auto-area, Wide-Area (with either small or large focusing areas) and Single-point modes, or Pin-point if you want to be really precise with your focusing.

Switch over to Continuous AF mode on the Z6 and there’s now an additional Dynamic AF focusing mode. Primarily used for focus tracking, you can tailor how many additional points support the active AF point, while you can also adjust the tracking sensitivity and other focusing parameters.

Along with resolution and focusing, the other key difference between the Z7 and Z6 is the burst shooting speed. While the Z7 is capable of 9fps, the Z6 is that bit quicker at 11fps – that’s also a touch quicker than the Alpha A7 III’s 10fps. This is thanks in part to the camera’s reduced pixel count compared to its high-res sibling.

Want to shoot silently? No problem: the Z6 has a quiet shooting mode that sees an electronic shutter take over from the Z6’s mechanical shutter for silent stills capture.

If you’re making your first foray into using an electronic viewfinder (EVF), moving from an optical unit on a DSLR, any concerns you might have will be quickly dispelled. The EVF is large and bright and delivers an incredibly crisp display, while the fast refresh rate of 60p means the image is nice and smooth.

The Z6’s 3.2-inch tilt-angle display is a touch bigger than the A7’s 3.0-inch display, while the higher resolution offered by the Z6’s screen (2.1m versus 920K dots), means the clarity and sharpness are that bit better.

Nikon has also integrated a much wider degree of touchscreen control on the Z6 compared to Sony’s A7 III. While on the A7 III touch control is limited to focus selection, triggering the shutter (by tapping the screen) and reviewing images, the Z6 also offers control over navigation of the menu and settings.

Our initial impressions of the Nikon Z6 are very positive. The adoption of a new lens mount is a big move for Nikon, but it should pay dividends in terms of improved optical performance, while the optional FTZ mount adapter ensures that you’re not necessarily starting from scratch if you’ve already invested in a lot of Nikon glass.

As we felt with the Z7, the biggest issue we can see with this camera is the single XQD card slot; otherwise the Z6 is a feature-packed, and, based on our short time with it, refined camera that delivers very strong performance.

With some tough competition from Sony’s Alpha A7 III, the Nikon Z6 needs to deliver the goods, and based on our time with the camera it looks like Sony isn’t going to have it all its own way in the high-end mirrorless market for much longer.