When I spoke to Hasselblad’s CEO, Perry Oosting, at the launch of the H6D he made it pretty clear that the company’s next camera would be more affordable, to attract keen enthusiast photographers as well as pros. And while few would argue that the X1D is cheap at $8,995 or £5,990 (about AU$12,054), it’s ‘attractively priced’ in Hasselblad terms.

Part of the reason for the expense, in addition to Hasselblad’s reputation for impeccable build quality, is the medium format sensor. Its 43.8 x 32.9mm CMOS device may be smaller than the 60 x 60mm negatives we usually associate with Hasselblad – or even the once popular 60 x 45mm crop – but it’s still a lot bigger than the 35.9 x 23.9mm full-sensors found in cameras like the Canon 1DX Mk II or Nikon D5. 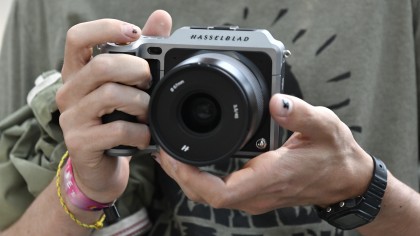 The larger sensor allows the photo receptors to be bigger, so they capture more light, which translates into superior image quality. It also enables greater control over depth of field.

Hasselblad has plumped for a 50MP sensor – the same found in the H6D-50C – and the 3FR raw files average out at around 65MB, becoming 154MB when converted to TIFF. It’s possible to shoot raw and JPEG files simultaneously at a maximum of 2.3 frames per second.

There are two SD card slots for image storage, and the sensitivity range is ISO100-25,600. 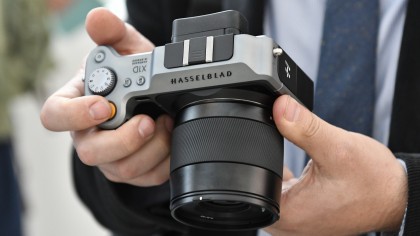 Although Ove Bengtson, Hasselblad’s Product Manager, says it wasn’t the inspiration for the X1D, the new camera reminds me of the Mamiya 7 – a popular film medium format camera. A key difference, apart from the use of a sensor rather than film, is that the Hasselblad camera uses the image sensor to inform the focusing system (either automatic or manual), rather than the rangefinder system of the 7.

It’s a long time since I used a Mamiya 7, but from memory I’d say the X1D’s body is smaller, while the Hasselblad lenses are a bit bigger. 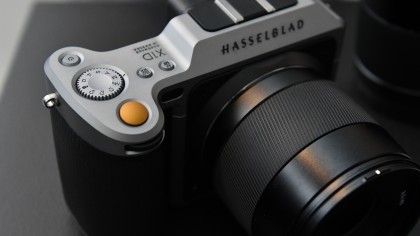 The X1D is very comfortable in your hand, and only weighs 725g, so it should be fine for lengthy hand-held shoots.

As it’s a mirrorless camera the X1D has an electronic viewfinder from Seiko (aka Epson) rather than an optical one, with 2.36 million dots giving a reasonably detailed view. According to Bengtson the company didn’t opt for a higher-resolution screen because it would have reduced the refresh rate.

In the low-light of the launch venue the viewfinder is a little noisy, but I’m told its image quality isn’t finalised yet and it looks much better in good light – I’m inclined to believe that. 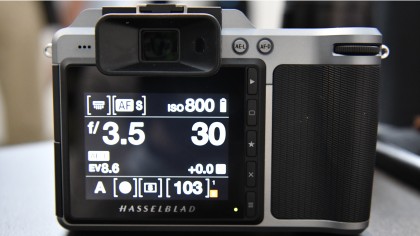 There’s also a 3-inch touch-sensitive rear TFT screen featuring a 920,000-dot resolution. It acts as the main control means, as there are only a few buttons and two dials. Swiping down on the screen pulls down a control panel full of key settings.

A tap on any of the feature icons brings up the various options for selection. It’s even possible to set shutter speed and aperture via the screen, although these settings can also be adjusted via the two control dials. 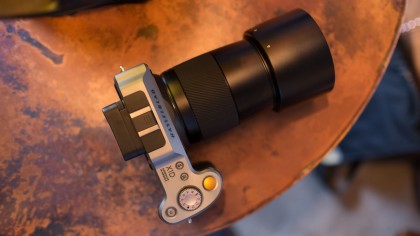 On the top plate there’s a dial to select the exposure mode. In addition to the usual program, aperture priority, shutter priority, fully automatic and manual options the camera features three custom options, enabling you to save three different setups for quick access.

Cleverly, this dial can be locked by depressing it like a button, and a quick press makes it pop up for action. It’s a great idea, but the dial could really do with coming up a little higher, as it’s fiddly to operate. 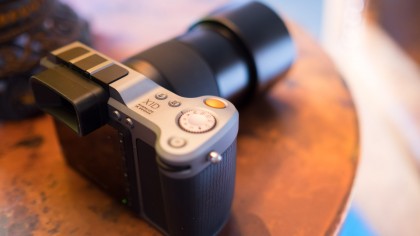 In addition to the power and shutter release button on the top plate there are two small buttons. One enables you to switch between manual and autofocus, while the other gives a quick route to the sensitivity and white balance options – one press for sensitivity, two for white balance.

One area that definitely needs to be addressed before sales start is the start-up time – the cameras in use at the launch event took several seconds to get ready for shooting. Apparently this is in the pipeline, so fingers crossed. 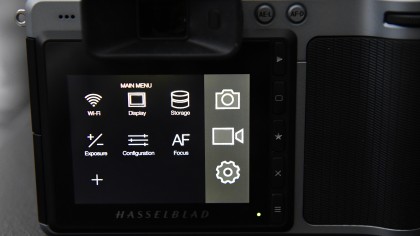 The sample X1Ds available at the launch in Sweden aren’t final production models, and some of them have a few glitches, so I wasn’t allowed to keep any of the images I shot, but images look good on the rear LCD. And as you would expect, the venue had plenty of fantastic images that were taken with the X1D on display.

It all looks very promising in that respect. The quality of the new optics is said to be the same as the H lenses, but to be compatible with the short flange depth. 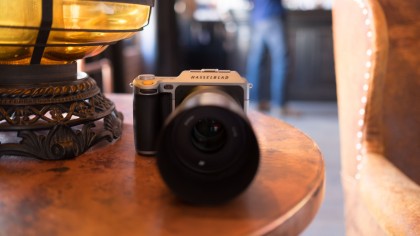 Focusing isn’t super-quick, however. There’s a bit of shuffling before the X1D settles on the target, but I was shooting in quite low, flat light, which makes focusing a challenge. It’s certainly fast enough for landscape, still life and portraiture, though.

There was no auto white balance option on the camera I used, so you have to use a preset or custom value – not a drama, especially as most users are likely to shoot raw files. On the whole, colours looked bright and noise was well controlled, but I’ll need to investigate image quality properly when review samples become available in August. 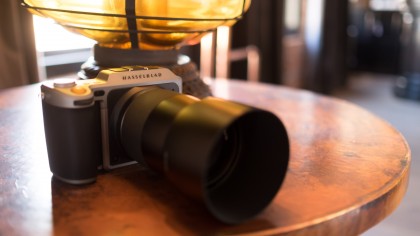 Hasselblad only started thinking about the X1D in November 2013, and development didn’t start until 2014. This means it’s only taken about 18 months to develop, an incredibly short time. According to Bengtson this is possible because the camera uses many of the same features as the H6D-50C. Much of the work on the X1D centred around reducing the size of the circuit boards to enable the size of the camera to be reduced.

Although the lens mount is new, Bengtson claims that mirrorless lenses are relatively easy to develop. Interestingly, the lenses were designed in collaboration with the designer of the Xpan optics, and are manufactured in Japan by Nittoh; long-term partner Fuji hasn’t been involved at all.

The X1D is a very exciting camera. It’s great to see a manufacturer with Hasselblad’s heritage embracing modern mirrorless and touch-screen technology, but it’s also fantastic that medium format cameras are being pulled into the modern age.

It’s not suited to shooting fast action, and you still need to pay heed to the usual guides for getting good images from a larger-sensor camera, but the X1D is more portable and convenient to use than any other medium format model available. In addition, the price is reasonable for such a high-end camera.

I can’t wait to get a production sample in for testing.