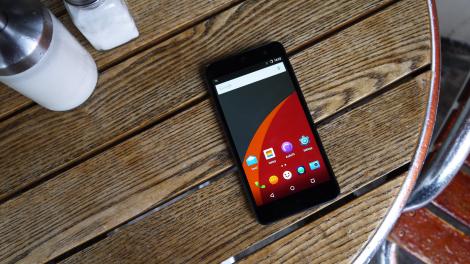 The Wileyfox Swift talks a big game, promising a volley of customisation options, high levels of security and premium components under the hood – and all for a small price.

In fact, the firm’s first handset will set you back just £129 (€169) SIM-free from its website. This isn’t a handset you’ll be able to pick up in store, as, like Huawei’s Honor brand and OnePlus, Wileyfox is a purely online venture for now.

The camera department also packs some surprising punches, with the 5MP front-facing snapper joined by a sizable 13MP rear shooter. On paper, the Wileyfox Swift is an enticing proposition – but can it translate these specs into a fully formed smartphone?

The Swift sports that classic smartphone look from the front – a black slab with relatively sizable bezels above and below its 5-inch display. The neat circular earpiece reminds me of the Nexus 5, while on the bottom you’ll find a microUSB port flanked by speakers.

On the right there are power/lock and volume keys, and the headphone jack resides on top. It’s bread and butter smartphone design: clean and simple, yet ultimately uninspired.

Things are more interesting round the back, with the slightly raised camera lens sporting a shiny orange accent and an embossed Wileyfox logo sitting proudly in the centre. The soft, rubbished rear provides a nice feel against the hand and a decent level of grip for a handset, which is surprisingly lightweight at 136g.

You can peel off the plastic rear to reveal the removable 2500mAh battery, dual SIM card ports and a microSD slot which supports cards up to 32GB in size. A handy array of options for a wide range of users.

The Wileyfox Swift isn’t the first entry-level handset to rock up with a flagship-sized display and a 720p resolution.

In fact, 720p is quickly becoming the norm towards the bottom end of the mobile market. The Swift isn’t getting left behind, nor streaking ahead of the competition in this respect.

Viewing angles are good, and the screen looks nice and vibrant when the brightness is turned up. It’s covered by Gorilla Glass, although it’s not clear which generation the Swift’s sporting – and it does feel a little cheap under the finger.

Press down harder on the display and you can feel the glass flex a little. You can even distort the screen slightly. At no point do you need to press this hard on the screen, but it’s a noticeable chink in the armour and indicates an area where some corners may have been cut.

I was assured by Wileyfox CEO Nick Muir that the screen has been thoroughly tested to a point where the company is happy with the robustness of the handset, so it should hopefully survive some rough and tumble.

Two of the key pillars of the Wileyfox mission are customisation and security – both of which are aided by the appearance of Cyanogen 12.1 on the Swift.

Cyanogen builds on Android (version 5.1 in the Swift’s case), adding more features and settings to the interface and giving you a huge amount of control over the operating system.

In terms of style and layout, it mirrors stock Android, so if you’re already familiar with the OS you’ll feel at home. You can tinker with the notification bar, change app icons, completely remove any unwanted apps, customise the navigation bar and more.

In terms of security, there’s no fingerprint scanner – not a surprise at this price point – but Cyanogen offers up a range of features to keep the stuff on your phone safe.

It comes with the PIN scrambler feature, which enhances the PIN lock you get on most phones and rearranges the order of the number pad each time you go to unlock. That makes it harder for someone looking over your shoulder to work out your PIN, as they can’t just use the button locations you hit.

You can also take advantage of Privacy Guard, which gives you granular control over the information each app on your phone can access. Don’t want to share vital personal details with a game? No problem, you can shut if off.

Performance-wise, the Wileyfox Swift can be found wanting. Considering that it sports the same processor as Android Wear smartwatches, you’ll get some sort of idea of the power capabilities of this phone.

It does have 2GB of RAM, which helps it a little, but fire up a lot of apps at the same time and you’ll notice some serious slow-down when moving between them.

For many of us, our phone is our main camera, so to find an affordable handset rocking a 13MP rear snapper is pretty exciting.

That’s exactly what the Wileyfox Swift offers (along with a 5MP front lens), giving you a powerful photography machine in your pocket for not a lot of money.

Fire up the camera app and you’ll find the simple interface enables you to start snapping right away.

There’s a ‘zero shutter lag’ option, which gives you super-quick shutter speed. That’s great for burst shots, but can mean your general snaps are a little out of focus.

Turn off this function and there’s a noticeable delay between pressing the shutter key and the Swift taking the photo, although images are more defined and the camera will perform better in low light.

You can pre-register your interest in the Swift now, with the handset expected to ship towards the end of September.

The Wileyfox Swift appears to be well-built, feature-packed and cheap enough to make it an interesting proposition – and it needs to be in order to to draw people away from established names like Motorola, Lumia, Huawei, EE and Vodafone at this end of the market.

A three-year warranty and locally-based hotlines are nice touches, but they’re unlikely to pull the punters in.

I’m a little concerned about the performance of the handset, but if it manages to keep up during my in-depth review process then the Swift could be a hit.