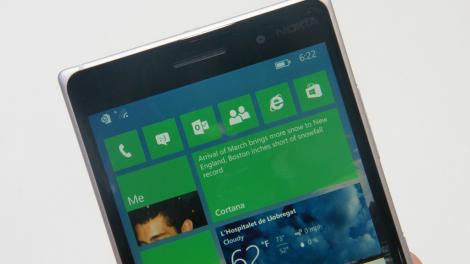 Microsoft unveiled a new version of its operating system last year breaking the mould and skipping ahead right to the number 10.

Windows 10’s main aim was to connect its ecosystem of devices using the same apps across desktop, tablet, smartphones and even its own Xbox One.

Even the mega exciting Microsoft HoloLens reportedly runs in conjunction with the OS.

And that’s now here for computers; but Windows 10 Mobile isn’t coming until later in the year.

Microsoft revealed back at MWC 2015 that any device currently running Windows Phone 8.1 will be upgradeable to Windows Phone 10 by the end of the year. An actual release date isn’t on the cards yet though.

We managed to get a bit of hands-on time with the developer version of Windows 10 Mobile at MWC and have since installed the developers preview of the system onto a Microsoft Lumia 640 LTE we have in the office.

The biggest change in Windows 10 Mobile is the look of the OS. Each page has a translucent background meaning if you place an image as your background it’ll follow you through whilst not being too distracting from the content in front.

It does add a different flavour to the design and makes it all look that little bit nicer than the boring solid colour backgrounds within WP 8.1.

The Settings menu has had some touch up changes organising it in a way you’d expect to see on desktop. Quick settings have also expanded this time around adding in a few more useful options that can be accessed within a couple of taps.

A swipe right will still get you to the list of all installed apps, but now at the top is a new section called the ‘Download Tank’.

This is where all the recently installed apps will sit to make sure it’s easy to access the newest software additions to your phone. It’s a novel idea but I can’t help but feel this section of the menu could have been better used as a selection of favourite apps.

I would prefer this space to be used for apps that I don’t want to install as live tiles on the home screen but I also find easy to access, especially if they’re toward the end of the alphabet and it takes what feels like forever to scroll down and find them.

Microsoft’s main push with Windows 10 is the collaboration aspect meaning all Windows devices can interconnect. Universal apps means all the applications will look the same and sync across mobile and desktop devices instantly.

We managed to play around with one connected and the action center, what Microsoft calls notifications, was updated in real time. I think it’s great news as it can be properly frustrating to check a notification on your phone but it doesn’t notify your tablet that you’ve already seen it and you have to dismiss it twice.

Using the cloud you can even begin typing out a new document before picking up where you left on another device seamlessly.

Project Spartan has now been officially titled Microsoft Edge within the developers preview. It’s the new version of Internet Explorer that promises to offer a better internet browsing experience than we’ve seen before on Microsoft devices.

Cortana has also undergone some more upgrades to ensure it acts as the personal assistant Microsoft wants it to be.

When we did our intital hands-on it was in Spain, a territory currently not receiving access to Cortana’s voice control, so we couldn’t use it.

Now we’ve got it running in the UK we’ve found some real issues. Cortana isn’t currently picking up anywhere near as many instructions as it did on Windows Phone 8.1. It must be a problem with the developer addition as now it can’t even set up calendar reminders.

I don’t want to fully judge the system in the developer preview but it would be great to try out the new email feature. According to Microsoft you’ll be able to send emails with your voice, but at the moment I’m just greeted with a message saying “Sorry, something must have gone wrong.”

There’s also a new section under the Windows Store Beta that shows “Apps for Cortana” suggesting some third-party offerings are in the making. We haven’t heard any confirmation directly from Microsoft yet.

Windows 10 Mobile will be launching in the UK, USA and China later this year but there is still no news on when it’ll arrive in Australia.

A brief amount of time with the Windows 10 Mobile platform shows some real promise and everything is taking a step in the right direction for an OS that always feels like it’s playing catch up. Windows Phone is looking the best it has ever done and it offers more functionality than ever before.

The main focus of the new upgrade is to connect it with our Microsoft products and if you haven’t got one it won’t feel like the substantial update the mobile platform deserves.

For those who do have Windows 10 devices it will offer a lot more collaboration functionality meaning it’ll strengthen itself as a mobile operating system but I don’t think it’ll ever compare to the big guns of iOS or Android.