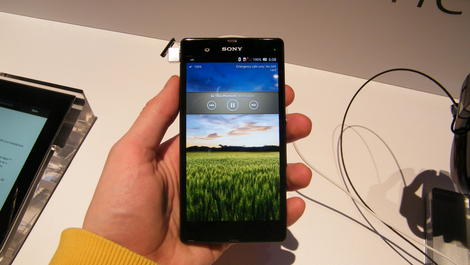 The Sony Xperia Z is the phone that’s set to propel the Japanese firm to the head of the phone charts – and if it went on specs alone, there’s a good chance it would manage it.

We’re looking at yet another redesign from the Sony design studios – from the Sony Ericsson Xperia Arc to the Xperia Z, we’ve had four iterations of the smartphone aesthetic.

From the ‘human curvature’ through to the more industrial Xperia S, back to the curves for the Xperia T and now with the sharp edges of the Xperia Z, we’re constantly being given new looks. 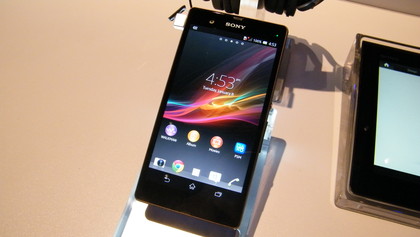 While we – rightly – lambast Apple for not really changing the look of the iPhone from model to model, this is a lot to take in. However, the good news is that the Xperia Z is probably the most attractive of the lot, with its superbly thin 7mm chassis, 1080p 5-inch screen and quad core Qualcomm processor kicking things along under the hood.

In short, this is the most powerful Sony smartphone ever made, and the brand tells us it’s the first model it’s really had a strong influence on since it took the manufacturing over from the Ericsson joint venture. 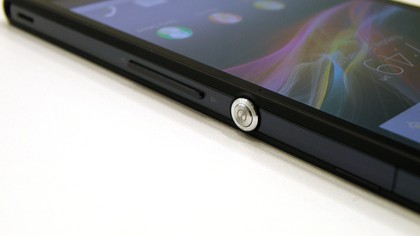 The new design language will permeate through the entire Bravia range apparently, bringing an iconic look to products in the TV, phone and other categories.

It make sense, given Sony needs to push the ‘connected home’ message, but also probably means the Xperia Tablet S will be obsolete before it’s even had a chance to get going.

But what of the Xperia Z, we hear you cry? Is this the final message in the Xperia range thanks to nabbing the last letter of the alphabet? Well, probably not, but it does deserve to have the Z moniker thanks to the sheer awesome power on offer. 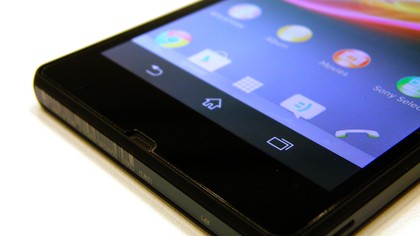 We’ve already mentioned the 1080p 5-inch screen, and it’s probably both the most impressive and disappointing feature on the Xperia Z. It’s impressive because it’s so pin sharp, coming with a post-400 PPI and offering some lovely contrast ratios.

On top of that, it’s much closer to the edges of the device, meaning that it has a footprint very close to the Samsung Galaxy S3 while packing that massive display. Think Motorola Razr i when you’re holding it in the hand and you’ll be pretty close. 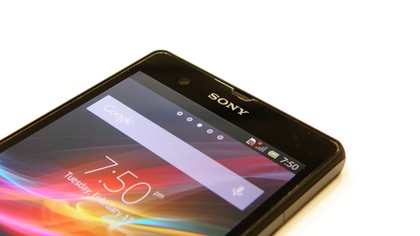 However, we say we’re disappointed in it as it really does lack the impression of a Super AMOLED screen when viewed even slightly off angle. Look at the phone on a table and you’ll be surprised how washed out the display seems, compared to the almost printed-on nature of the Samsung S3 or Galaxy Note 2.

We say we’re most disappointed in this feature and that tells a story in itself: it’s not a big deal at all as you will mostly be looking at the phone straight on for 99% of the time, so for this to be the worst of it means it’s an excellent smartphone. 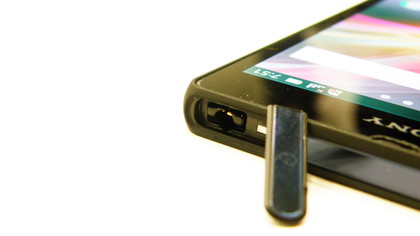 In the hand it feels superbly premium: light enough to be impressive, heavy enough to feel like you’re getting a decent deal for the money. And add to that the fact it’s water and dust resistant and you’ll be so surprised it may fall from your hand.

And it would likely survive – just remember to clip on the covers for the various ports round the sides of the device. 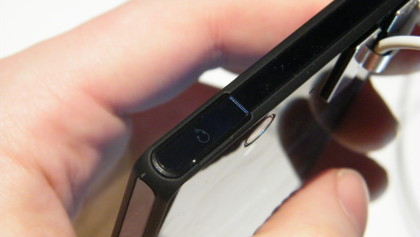 The interface is also a pleasure to use: it’s Android Jelly Bean 4.1 running on top of a Qualcomm Snapdragon S4 Pro quad core CPU with 2GB of RAM.

We’re a little sad that we’re not seeing Android 4.2 used here, but Sony assures us that it has placed a minimal skin over the top of the OS and can be upgraded very easily when needed. 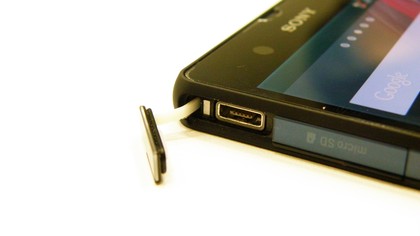 An upgrade to Android 4.2 is on the cards with Sony currently working on it and it hopes to make it available to users as soon as possible although no release date has been given just yet.

In terms of the interface, it’s recognisably Sony but doesn’t add too many bells and whistles; gone is the resource-intensive and pointless Timescape ‘Splines’ that dominated the old interface. Instead we’re presented with a sea of icons and widgets that you can resize and change as you see fit, and not much else. 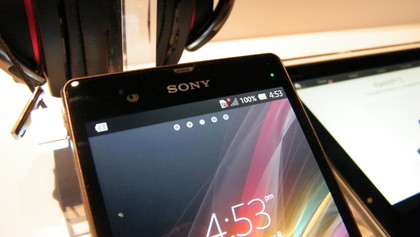 The Sony Xperia Z will definitely appeal to those who are fans of stock Android but like the idea of having a little personalisation in their handset – although the lock screen does at least offer a cool way to open up the camera or unlock the phone.

You can have little home screens on this part of the interface too, so you can set calendar, social network or messaging updates to show without you needing to actually start up the phone proper-like. 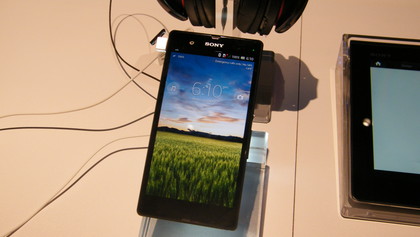 When we say that the skin is minimal, it really is; so the main points of differentiation have to come from the software enhancements.

To that end, the Mobile Bravia Engine 2 is the biggest leap forward on the phone – we were shown side-by-side comparisons between standard definition footage and the same with the BE2 algorithms applied – and it was startling. 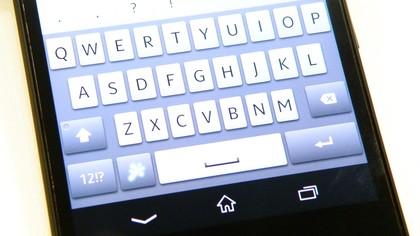 The colours were so much more rich, the detail it ‘discovered’ was massively impressive, and the overall smoothness of what was a fairly fuzzy scene blew us away.

Sure, it looked a little over-sharp and saturated at times, and proper video buffs are going to moan about the fake enhancements, but in reality most users will see this mode as a real plus.

When it comes to media, we were a little shocked to find out that the Sony Xperia Z comes complete with a microSD card slot to supplement the meagre 16GB of onboard storage. 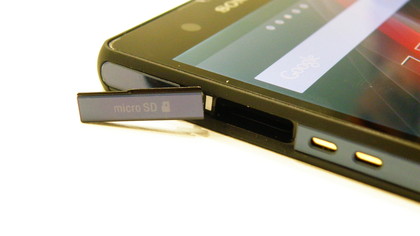 It’s refreshing to see another top level manufacturer putting the option on there, and especially so when you consider the minimal thickness of the phone too.

As you can imagine, HD video looked simply superb on the expansive screen, and we can see the Xperia Z will be a really decent mobile for movies on the go. 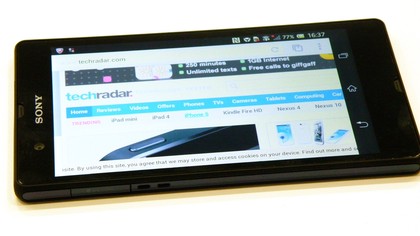 The screen is also excellent for internet browsing (along with the RAM and processor combo, which on Wi-Fi were superbly speedy. We couldn’t test it on 3G or 4G, but we’d imagine that it will be excellent on both as well, given the grunt and speed on offer).

Zooming in and out of text was a breeze and it meant that even if you wanted to view anything zoomed out, the text was really easy to read and made navigation that much easier. 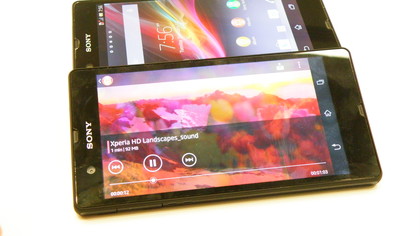 In short, when it comes to movies or internet browsing on the go, we couldn’t really fault the Xperia Z. Of course, it does come down to price, but with one of the best processors on the market as well as an impressive screen there are going to be a lot of people drawn to the device.

Another one of Sony’s strengths is the upgraded Exmor R sensor: it’s now the Exmor RS version and it brings even greater low light ability. Sony is touting the improved photo quality, obviously, but its main feature is HDR video recording. 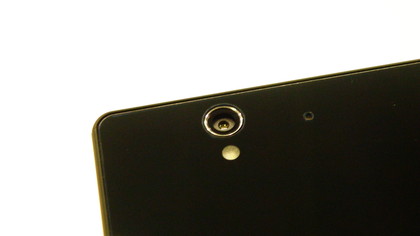 This means the Xperia Z can handle full HD video, process each frame three times and decide on the optimal light level. It’s an incredible amount of work going on when you consider it, so we’ll be massively intrigued to see how the battery power holds up during our full Sony Xperia Z review.

The final thing that we really think is worth mentioning, especially with the possibly suspect battery power, is the data and power management on offer.

Sony has, it says, invented new technology that means the phone will be drawing very little power when in sleep mode (ie when the screen is turned off) and it will completely disable apps from being able to communicate during this time. 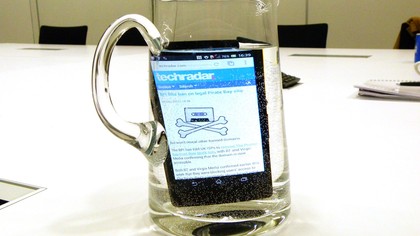 The first phone to perform such a trick is the Sony Xperia E, a more budget offering, but the difference between these two is that the Xperia Z can intelligently decide which apps should be able to communicate and which shouldn’t.

The user will have to specify which apps they think should be able to run under the lock screen, for instance Facebook Messenger or Skype, but Sony still thinks that battery standby life could be improved by a large order of magnitude with this new technology. 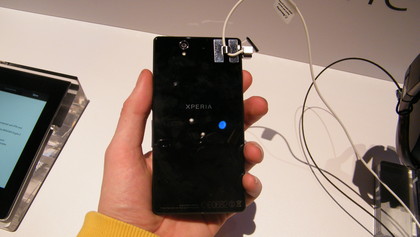 There’s no doubt that Sony has stepped up its game with the Xperia Z. We were pretty unimpressed with the screen quality when we first saw the handset sitting nonchalantly on the table, and if you’re not using the phone straight on, then you may not think you’re staring at a top-end smartphone.

But that aside, the rest of the device impressed us hugely. From the premium design, the weight and industrial casing and the larger edge-to-edge screen to the high-end Exmor RS sensor and Bravia Engine 2, there’s so much that Sony will be able to tout on its marketing literature.

We’re getting used to our hands on reviews yielding promising smartphones these days, so we’ll reserve a lot of judgment until we get our final review sample in. But based on our early look with the device there’s definitely a lot of positivity surrounding it, and the fact that Sony has finally joined the big boys with a powerful smartphone is enough to pique our interest at the very least.