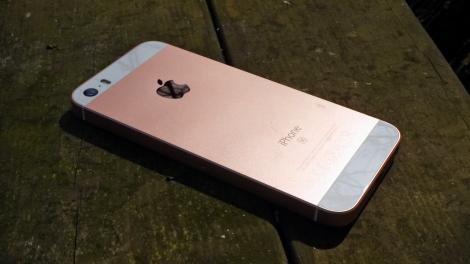 Update: Our full iPhone SE review is coming soon, as we just finished an unboxing video of Apple’s small, but brand new phone. Here are our thoughts so far – now with more picutures!

When the world zigs, you zag. Buy low, sell high. When the entire smartphone universe skews big, you reinvigorate the small. That, in a nutshell, is the mentality behind the iPhone SE. It’s a phone for those that love the smaller size but really wish they could have the power of a flagship phone.

There’s a big question on the lips of some smartphone fans at the moment – especially the Android ones: why does Apple seem to get such a huge interest level for re-releasing its older smartphone?

Having used the iPhone SE for a few days now, there’s nothing to choose between it and the iPhone 5S cosmetically. It’s precisely the same phone on the outside (and quite substantially on the inside too, it turns out) so is it fair to give the new handset so much attention? After all, Samsung throws out so many small phones a year it’s hard to keep count – and they get nowhere near as many pixels to read through.

But just casting an eye around the train on the morning commute tells you all you need to know: there are hordes of people still using the iPhone 5S and iPhone 5, and the amount of times I’ve heard anecdotally the reason they’re holding onto the older phone is because they ‘don’t want a phone with a big screen’ is too many to number.

The iPhone 6/6S (4.7-inch) and 6 Plus/6S Plus (5.5-inch) have dominated the landscape over the past two years, creating an opportunity for a brand to recapture the market for non-gargantuan phones.

What’s particularly special about the iPhone SE is its newness. Rather than Apple introducing a new hero device and pushing an older phone down-range (as it did when the iPhone 5S found itself selling for $0 on contract), the iPhone SE is a purpose-built device. It’s small, relatively speaking, but it’s also mighty.

It exists out of kilter with Apple’s usual release cycle. It’s not a phone that rivals the iPhone 6S or 6S Plus, but is a ‘bonus’ option that is designed to serve a specific demographic – something only Apple seems to be able to do successfully.

The camera has been overhauled and upgraded, boasting a 12-megapixel sensor and True Tone flash that puts it right up there alongside the snapper on the iPhone 6S. There’s also a potent 64-bit A9 chip, Bluetooth 4.2, a display that gets hella bright when you need to take a selfie in a dimly-lit room, and a starting price point of just $399 (16GB).

The exterior is svelte and sleek – every inch an iPhone, as we’re surmising Apple would say. The same exemplary precision found on the high-end iPhones is also found on the iPhone SE. At last, you don’t have to feel that you’re settling just to get a phone that’s easier to handle.

Handling the iPhone SE is a lovely affair, particularly if you’re coming from the iPhone 6S Plus. It’s dainty – cute, even – and although, obviously, it feels exactly as if you’re handling the iPhone 5S, there’s something extra novel about it now. It’s no longer the norm; the 4-inch form factor is now the exception.

It’s also bead-blasted aluminum on the outside too, which does give it a slightly different feel in the hand to the older, past-generation handset, although not by much. Wait, have we got to the point where a phone from 2013 is now considered retro?

The fit and polish are just like the iPhone 5S though, and if you were just looking at them on the table, there’s very little way to tell the difference.

The same sharpness, the same rounded buttons on the side – it’s as if Apple opened a door in one of its warehouses and found a million boxes with the 5S chassis sitting around doing nothing.

It’s a shame that Apple hasn’t updated the design. While it should be lauded for offering something really viable for the reams of people still craving a phone you can use in one hand, there’s no reason the iPhone SE couldn’t have taken on the rounded form factor of the 6S duo, other than Apple wanting to save money.

Speed in a small package

Using the phone, however, is a markedly different experience to using the iPhone 5S, and that’s precisely what Apple needs to push.

The A9 chip enables the iPhone SE to open apps just as quickly as the iPhone 6S. It’s honestly quite refreshing to feel this much power in a phone this small – we just haven’t been privy to Apple’s top-end hardware in its smallest iPhone in a few years, and the glut of people still buying the iPhone 5 and 5C second-hand are a testament to the desire for this spec combination.

By shoving in the M9 co-processor, there are all the same specs and abilities that you’re getting on the newer phones too. So whether that’s monitoring your steps, or flights of stairs climbed, or just letting the phone note when it’s resting quietly on the desk, it’s all handled simply.

This means Hey Siri, the auto voice recognition function, is enabled – although whether you’ll use it more than three times during the life of the phone will depend on what kind of committed tech-fiend you are.

The revamped 12MP iSight camera is present and correct onboard, and while it’s every bit as good as the one found on the iPhone 6S, it’s not as easy to use thanks to the smaller form factor. It’s odd to think that a more ergonomic phone makes framing pictures harder, but it was just harder to work out the picture with the more cramped screen.

In terms of spec though, you’re getting the same camera mix as on the iPhone 6S. That means 4K video recording, the Focus Pixels to get the sharper autofocus, a True Tone flash – in short, all the bits that Apple has shouted about on the newer iPhones in the smaller package.

And by making the iPhone SE thicker, the camera bump is gone, which is great news for those that hated the ruined aesthetic from the raised section on the rear of the phone.

Notably, the iPhone SE looks and feels just like the iPhone 5S before it. It didn’t get slimmer, or more round, but we kind of dig it. There’s something novel about maintaining a tried-and-true design motif while overhauling everything within; indeed, that’s exactly the model Apple followed when transitioning from the iPhone 6 to 6S.

It’s the iPhone 5S but with the brains and brawn of the newer models, which will likely appeal to a great many iPhone fans – and many in the Android world looking for this size-and-power combo. Some have pointed to the Sony Xperia Z5 Compact as a perfectly good smaller alternative to the behemothic flagship phones in the Android world, but even that ‘smaller’ phone is much bigger than the SE.

Sure, you could still nab a 5S now if you wanted and save a whole lot of cash, but in terms of performance and longevity of upgrades the SE is leaps and bounds ahead of that ageing handset – stay tuned as we give our definitive verdict on whether the new iPhone really stands shoulder to shoulder with the new 6S and 6S plus… metaphorically speaking, of course.