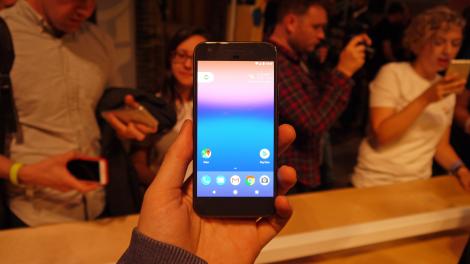 Nexus is dead. Pixel is king. Say hello to the Google Pixel, a handset ushering in a new era of the search giant’s smartphone range.

It arrives alongside the larger (and even more expensive) Google Pixel XL, as the firm doubles up on devices for another year.

The Pixel takes over from 2015’s Nexus 5X as the smaller offering in Google’s lineup. The thing is, it hasn’t inherited its predecessor’s price point, with the new Pixel sporting a decidedly more premium tag.

Previous Nexus devices had a leg-up over the competition with a slightly lower price tag, which helped users overlook a couple of shortcomings, but in 2016, with the new Pixel brand and a brave new price point there’s nowhere to hide.

If you’ve owned a Google-brand smartphone in the past you’ll appreciate the no-nonsense stock Google interface – and you’ll be glad to know it’s business as usual on the Pixel when it comes to the Android Nougat operating system.

For those who are new to Google’s handsets, things may be less clear. While HTC is the firm that has actually built the device, the search giant has had a big say in what goes into the Pixel, and how it operates.

These handsets are aimed to showcase the best of Google and Android. They pack new features not seen before on the platform (Google Assistant and a best-in-class camera in the Pixel’s case), and you’ll be first in line for an update when a new version of Android is launched – usually weeks, if not months ahead of the likes of Samsung, LG, Sony and co.

On paper at least then, the Google Pixel looks to be a flagship contender – but can it live up to the hype in real life?

The design is premium, if not slightly odd. There’s a metal body, but Google (and manufacturer HTC) has added a block of glass around the fingerprint scanner and camera on the rear. While it gives the Pixel a different look, the glass finish does look and feel a little like plastic.

That detracts from the overall appeal of the phone slightly, although the bottom portion of the handset is cool metal – and that’s the bit which will be in contact with your palm most of the time.

The power/lock key and volume rocker fall nicely under thumb and finger on the right side of the Pixel, while the nanoSIM tray is the only blemish on the left. There’s bad news for expandable storage fans though, as Google continues to shun microSD on its latest phone.

There is a silver lining, however, as Google now offers free unlimited cloud storage of all your photos and videos – at their full resolution – which means you don’t need to worry about them taking up vital space on your phone.

You can pick the Google Pixel up in three colors – Quite Black, Very Silver and Really Blue. Google’s had an obvious pop at Apple with the names, after the iPhone 7 arrived in ‘Black’ and ‘Jet Black’.

Really Blue is limited edition, although Google is yet to reveal how you’ll be able to get hold of it. Currently pre-orders on its site are only for the black and silver models.

There’s also good news for audiophiles – Google has kept the headphone jack on the Pixel. Its placement at the top of the handset isn’t our favorite location – but at least it’s there.

Moving to the screen and you’re greeted by a bright, clear full HD display. It’s pleasant to view and everything looks great – but there are likely to be some envious looks cast by owners towards those who pick up the QHD-toting Pixel XL.

Those who pick up the larger, higher-resolution Pixel XL will get a better Daydream experience, simply because the display can pack more pixels into your eyes for a more immersive view. It’s not a deal-breaker, and it won’t result in a terrible experience if you do opt for a Pixel, but there will be a difference between the two phones.

Performance is impressively smooth however, with the powerful Snapdragon 821 processor and 4GB of RAM providing more power than you’ll need on your smartphone.

The pure Android 7 Nougat interface runs smoothly, and while some Android fans may mourn the loss of the traditional app drawer, it’s not gone forever – instead you now slide up from the app doc at the bottom of your home screen.

It’s actually a nice action which works well, and the vertically scrolling app list is just as intuitive. Something else Google has tweaked are the app icons, with Google’s own applications sporting round images, while any you download from the Play Store will appear square.

One of the big new features for the Pixel is the inclusion of Google Assistant. Only the Pixel and Pixel XL currently have the firm’s new-look helper on board, which aims to give you your very own personal Google in your pocket.

It’ll continually learn what you like, where you go and what you need, to provide you with useful answers to even more commands than previous incarnations of the technology.

Triggered by saying the ‘hot word’ (which is “Okay Google” by default) or long pressing the home button, Assistant can understand complex commands, is contextually aware to what you’re viewing on screen and where you are in the world, and can follow the flow of a conversation with you.

It’s all very impressive, but we can’t see too many people rushing out to buy the Pixel based on Google Assistant alone. This is just the beginning though, as Assistant will follow you to other devices – such as Google Home and Android Auto – making sure it’s always there when you need. Watch this space.

Turning to battery life and the Google Pixel squeezes in a non-removable 2,770mAh power pack. That’s bigger than the iPhone 7’s, but smaller than the batteries found in the Samsung Galaxy S7 and HTC 10 – but it should be enough to see you through a day without having to recharge.

We’ll be putting the battery through its paces during our in-depth review to see just how well it holds up. But if you do run low, the new Pixel boasts fast-charging, giving you up to seven hours of usage from a 15-minute blast.

The 12.3MP rear camera is another big talking point for Google, which claims the Pixel has the best-rated camera (according to a DXO result) on the market.

We’ve found in the past that the DXO ratings don’t always translate into excellent camera performance day-to-day, so the jury is still out on that for now.

There was talk in the build up to the Pixel launch of a new pro mode for the camera, but alas this has not materialized. Instead you get HDR+ which brightens up areas in shadow and reduces blurring – which should help in low-light settings.

During a brief play with the Pixel camera in the dimly lit event space we found performance was acceptable – especially when we reduced the brightness (the one setting you do have access to). It didn’t blow us away, but we’ll need to put it through a proper test before we can have a final say on the quality.

The Google Pixel is a solid smartphone, but it takes a different direction to previous Nexus handsets. Its loftier price point means it’s now under real pressure to perform extremely well in all respects, and it remains to be seen if it can live up to its on-paper potential.

It’s a phone we really want to love – but we’ve not fallen head over heels for it just yet.

The design will likely divide people, and the increased price will certainly be a stumbling block for some, but the Pixel is a fast, slick, powerful smartphone which puts the best of Google in your palm. We can’t wait to put it properly through its paces – especially that camera.