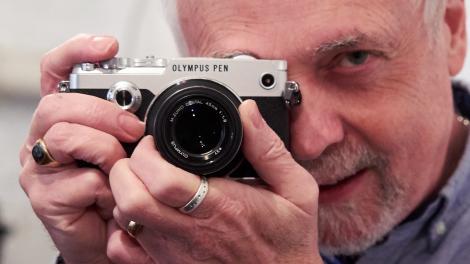 Olympus isn’t just hinting at the PEN-F’s photographic heritage, design, construction and craftsmanship, it’s laying it on with a trowel. This is not a camera for bargain-hunters, but one designed for discerning photographers who “appreciate the finer things in life”.

It’s for photographers who enjoy not just the images they capture, but the satisfaction of using a finely engineered camera to get them. Let’s be honest, we all get a kick out of using nice things, and Olympus is just bringing it out in the open.

This is the first PEN to shoot in what Olympus calls ‘rangefinder style’. It’s referring to classic reportage cameras like Leicas which had interchangeable lenses and viewfinders in the top corner. The PEN’s viewfinder is electronic rather than optical, and focusing is carried out with a regular autofocus system rather than a manual rangefinder mechanism, but the look and feel and handling have strong echoes of that rangefinder style.

The electronic viewfinder is a high-resolution OLED type, with 2.36 million dots, while the screen on the back of the camera is a fully-articulating 3-inch LCD with a resolution of 1.037 million dots.

Olympus says the PE-F is designed for spontaneous everyday street photography without a tripod, and to back this up it has an impressive 10fps continuous shooting speed and speedy autofocus. The 81-point autofocus system is a regular contrast detection type, rather than the hybrid AF used in Olympus’s more advanced OM-D models, but despite this Olympus says the PEN-F offers the shortest lag between pressing the shutter button and taking the picture of any camera in its category.

Operational speed is aided by Olympus’s Eye Detect AF system and touch-panel point focusing. In a change to previous systems, Olympus has now locked the spot metering to the active autofocus point for more reliable spot metering, and manual focus is made easier with a focus peaking option – this emphasises the outlines of objects on the screen when they ‘snap’ into focus.

The PEN-F is, as Olympus points out, the most powerful PEN model yet. It might look like a homage to a bygone era, but the innards are brand new. The sensor is a brand new 20MP unit with 25% more resolution than the 16-megapixel sensors in Olympus’s other Micro Four Thirds mirrorless cameras. The new sensor has no anti-aliasing filter, a move designed to deliver even sharper fine detail, and Olympus says the extra resolution does not come at the expense of image quality – dynamic range and noise are said to be just as good.

The PEN-F inherits some of the technology from Olympus’s bigger OM-D series cameras, including the high-res mode first seen in the OM-D E-M5 II. This uses the sensor’s image stabilization system to shift the sensor half a pixel at a time to capture eight shots in a sequence, which are then merged into a single high-resolution image. On the E-M5 II this delivers 40-megapixel images, but on the PEN-F this goes up to 50 million pixels.

This is the same 5-axis stabilisation system found on the higher-end Olympus models and is claimed to offer a 5-stop shutter speed advantage. It doesn’t just cut camera shake in stills photography, though, but in the PEN-F’s video mode too. There’s no 4K video option, but the PEN-F can shoot 1920 x 1080 full HD at a range of frame rates, including 60p, 50p, 30p, 25p, 24p.

The most striking external feature is a new Creative Dial on the front of the camera. This is used to access the rather good Art Filters and effects that Olympus builds into its cameras, plus two new settings: Monochrome Profile Control and Colour Profile Control. You can use these to adjust the gradation of your photos, adjust the colour saturation of 12 different colours individually and, in monochrome mode, add film grain and black and white filter effects.

The Pen-F feels a similar size to Olympus’s regular PEN models, but the controls and finish are on a higher plane. Olympus is very proud of the fact there are no visible screw heads, and while it’s not a feature that’s likely to be on anyone’s wish-list it’s a sign of the attention to detail that’s gone into this camera.

What sets the PEN-F apart from other PENs is the electronic viewfinder. We’re used to these being a bit grainy and ‘laggy’ in poor light – and the venue chosen for the launch was underground and lit by artificial light only – but the PEN-F’s viewfinder seemed to have the clarity of an optical ‘finder’ and no visible lag or graininess at all. We might change our minds during a full test, but first impressions were very positive indeed.

The autofocus seems fast and snappy too. This is a welcome surprise, given that it’s a comparatively simple contrast AF system rather than a hybrid type with phase detection pixels on the sensor. Contrast autofocus is accurate but tends to be slow. Phase detection systems are faster, but difficult to implement on a non-DSLR camera because they require a special sensor design.

The PEN-F’s handling is especially impressive. This is a small camera and smothered in dials and buttons, yet it doesn’t feel cluttered. It has a twin-dial layout that works brilliantly for shutter speed and aperture adjustments in manual mode, for example, and a clever jog-dial just below the shutter release can be used to apply shadow/highlights/curves adjustments to your photos – something you’d normally need to do later in an image-editor.

This is a complex and sophisticated camera, though, and it could take a while to get to the bottom of everything it can do. The settings and options opened up by the Creative Dial on the front are impressive, but deep. If you’re not yet an Olympus expert, you might need to set aside a few evenings with the manual to get fully up to speed.

That’s just for the more advanced stuff, though. Any photographer used to a high-end compact, DSLR or mirrorless camera will quickly figure out the major controls, and Olympus has succeeded in giving the little PEN-F a premium quality feel.

The dials have a light, crisp action – typically ‘Olympus’ and the rear four-way controller does not, for once, have a concentric control ring. These combine functions and save space but they’re awful to use because you need to press the outer ring to get enough purchase to spin it, and all too often end up pressing an up/down/left/right button at the same time. This activates a function you didn’t want and you waste time cancelling it to get back to the setting you did want to change.

One especially charming retro touch is the inclusion of a cable release thread in the shutter button – wonderful! It harks back to a time when remote releases didn’t need batteries, electrical connectors or radio control, just a cable with a plunger at the end and a locking screw for long exposures. Old-time photographers might still have one in the garage.

Some closer examination reveals how such a small camera manages to handle so well. The front left edge is shaved back just a bit, enough to let your left supporting hand hold the camera without cutting into the sharp edge that’s usually there. It’s a tiny change to the camera body but it makes a surprising and dramatic impact of using the camera.

And the new exposure compensation dial on the top is is such a welcome addition – it frees up the the top two control dials for many more options.

Olympus has also been quite clever in moving all the buttons over to the left side of the camera, so that the chance you’ll accidentally hit one of the buttons while holding the camera at your side or while operating it is greatly reduced.

Usually, the inclusion of a vari-angle LCD is better than a simple tilting screen. This time, though, a tilting screen might have been better for the kind of candid shoot-from-the-hip photography the PEN-F is designed for. The PEN-F isn’t weatherproof, either.

The PEN-F is what a lot of Olympus PEN fans will have been wanting for a long time – a PEN with a viewfinder. But rather than simply slotting one into an existing model, Olympus has designed a new camera, aimed at a discerning, up-market audience.

The new PENF-F is not a poor relation to the larger OM-D models. It uses a good deal of their technology but introduces its own innovations, including its unusual Creative Dial and the first 20-megapixel sensor in the Olympus mirrorless line-up.

It’s interesting that this follows on closely from the Panasonic GX8. This too has a new 20-megapixel Micro Four Thirds sensor, and you can read into that what you like. Panasonic has also made the decision to put its latest and best sensor into a rangefinder-style camera rather than one of its larger models.

Our first impressions of the PEN-F are extremely positive. The viewfinder is bright and clear, the autofocus is fast, despite not being a hybrid system, and the build quality and design of this new camera are first rate.

Olympus seems to be deliberately targeting an affluent and prestige-conscious sector of the photography market, but that doesn’t mean the PEN-F shouldn’t be taken seriously. It’s small, beautifully made and powerful, and we can’t wait to test it out properly.