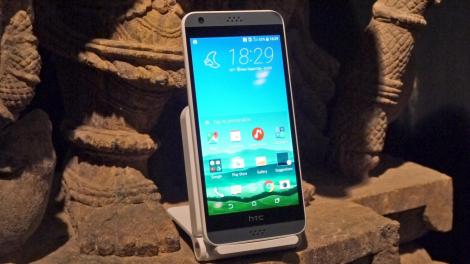 While it’s never the sexy side of tech (if there, really, ever could be such a thing), the low-end, basic phones are the bread and butter for most brands – and they need to make them well if they’re ever going to hope to turn a profit.

Which is why the HTC Desire 530 is a curious phone – it seems to nearly sit in the right place, but misses on a few key areas that might irk even those that aren’t willing to pay much at all for a smartphone.

Let’s kick off with the design, and it’s generally exactly as many would expect. It’s got a lightweight plastic casing, an attractive speaker grill above and below the screen, and a nice enough feel in the hand. It’s nothing special, but does the job OK.

The buttons are nicely machined, while still plastic – but the big thing that you’ll be unable to take your eyes off is the new ‘microsplatter’ design on the back.

Previous Desire models had a lovely two tone ‘double shot’ look that a lot of people were really into, but this new splatter formation is meant to create truly unique phones, with no two designs the same.

That’s because it looks like you’ve left your phone near the easel when you’re trying to create something ‘arty’ during a time when you’re ‘finding yourself’… before realising you’re ‘rubbish at painting’ and you’ve ‘ruined your new phone’.

Maybe it’s one to appeal to the younger generations, and could help explain the re-appearance of the lanyard clip to let you carry your phone around the neck or the wrist. It doesn’t look amazing, but could just be another point that I’m getting older and further out of touch with today’s youth. Sob.

The screen is a rather standard 720p HD affair, measuring five inches across, which is good enough while, again, not being mindblowing.

The battery pack in the Desire 530 is a 2200mAh affair, which seems adequate for a phone that’s not got a lot of hardcore processing going on – it should see you easily through a day, but it’s not going to be long lasting and will mean you’ll need a little bit of careful management on the apps you install (so it’s not too hard on the data and battery.

The camera is 8MP, and in my tests, rather poor indeed. It’s irritating we don’t know the exact price for this phone, as it would really help inform whether this sensor is good enough, or sub par for a device that costs a little more.

It offered a little too much noise for my taste, even in brighter light, and will suffice as a camera to take average snaps – don’t expect good low light performance or a lack of blur here.

One place that HTC does excel is bringing the same premium interface experience to its phones. The Sense UI, running on top of Android 6.0, is an impressive mix to offer to a phone of this calibre, and slips along acceptably when being caressed by your digits.

Blinkfeed is present and correct, and the new method of easy widget and folder management from HTC’s Marshmallow-imbued interface is used once again – there’s very little different here to the HTC One A9, and that’s a great thing to offer good value for money to consumers.

The HTC Desire 530 is a phone that NEEDS to be cheap to be any kind of success and help solidify the bottom line for the brand. It’s a basic phone with basic features for, hopefully a basic price, and while I can’t say I’m a fan of the paint splashes on the back, it’s an iconic look, that’s for sure.

We’re hoping to get more info on the Desire 530 price and release date soon, so stay tuned for that to see if this is a bargain phone indeed.