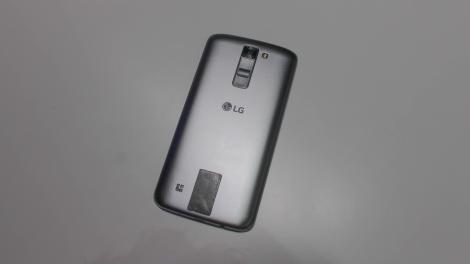 LG K7 is a budget phone that didn’t make the cut at the company’s CES press conference. However, this low-key Android did show up on the Las Vegas convention floor.

It’s an Android smartphone with a palmable 5-inch display and a respectable plastic design with a matte finish. In the US, it’ll be known as the LG Tribute 5 on Boost Mobile.

Whether you see it in stores as the LG K7 or the LG Tribute 5, it’s destined for prepaid carriers with an affordable price tag. It’s as far from the LG G4 as you can get.

That said, while wasn’t the flashiest phone at CES 2016, it runs Android and doesn’t exhibit any noticeable slowdown. It’s a budget phone that looks slightly nicer than the Moto E.

There’s very little difference between the LG K7 and the LG K10, as both new phones exhibit the South Korean company’s pebble curved design language. This one is just less glossy.

It’s an LG phone, so the buttons are around back as always. The power key and volume rocker sit right underneath the rear camera, instead of on the side of the phone.

The smooth 2.5D Arc Glass is a design that wouldn’t be possible with big buttons on the frame, and it all accentuates the clutter-free design of the LG K7.

It’s easier to hold without my hands trying to inartfully avoid side buttons. But it’s also prone to me smudging the camera when mispressing the out-of-sight buttons.

Instead, it relies on the low pixel count of its 480 x 854 resolution and its FWVGA In-cell Touch technology.I didn’t have trouble seeing between the 196 pixels per inch with my naked eye.

The good news is that I also didn’t have trouble seeing the screen from all angles. It’s bright and viewable, and I hope that remains true once I test it outside in the final LG K7 review.

LG made its K Series phones an adequate enough performer on a budget. Although the K7 is technically slower than the K10, I found it to be speedy given it’s a lightweight 480p device.

It doesn’t need much to power through the basic Android apps, and the LTE model I demoed had a 1.1GHz quad-core processor. There’s a 3G with a 1.3GHz quad-core chip, too.

It has 16GB of internal storage onboard with 1.5GB of RAM, though there’s also an entry-level option for 8GB of storage with 1GB of RAM that’s best avoided.

An 8MP rear camera and 5MP front-facing camera come with many of the LG bells and whistles like gesture shot, gesture interval shot and a screen-lit “flash” for front-facing selfies.

LG K7 runs Android 5.1 Lollipop, which means it hasn’t hopped on Android 6.0 Marshmallow’s energy-savings bandwagon yet, but it does boast a decently sized 2,125mAh battery.

The LG K7 does its best impression of a pricier LG phone without increasing the price or the 480p resolution. It has a lot of the styling cues of the flagship LG G4.

You’re not going to fool anyone with the LG K7, however, and the same applies to the nicer, but also technically limited LG K10. They’re budget phones doing their best impression of premium.

However, the K7 runs Android 5.1 and will arrive as the LG Tribute 5 at prepaid carriers in the US like Boost Mobile. That’s enough for the younger LG is targeting with this budget handset.