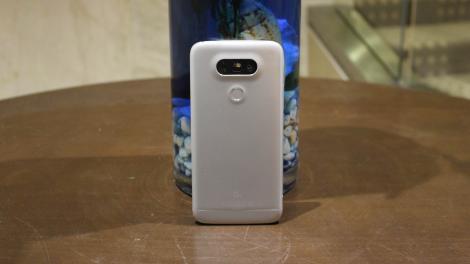 The LG G5 is a massive change from the manufacturer – gone is the confusing leather in favor of a full metal body, yet keeps fan favorite features like a removable battery and microSD card.

That’s a big deal because Samsung disappointed a vocal minority a year ago when it ditched its swappable battery and expandable storage hallmarks in the Galaxy S6.

OK, the LG G5 isn’t as ornate as Samsung’s glass-and-metal-fused phone, or Apple’s aluminum iPhone 6S, but it’s a step in the right direction after the leather-and-plastic-backed LG G4.

Not only does it include perks for power users, the South Korean company changed the way we access the battery: inventing a cartridge-like input so you don’t have to remove the back cover.

This “magic slot” is located in the bottom frame of the phone and doubles as an accessory port. Add-ons so far include a battery grip with physical camera controls and a Hi-Fi audio module.

You don’t really need either of these accessories to enjoy the camera and audio, though. LG G5 has a dual camera setup on the back, with one lense that provides extra-wide photos.

The front is highlighted by an always-on, 5.3-inch display. It never goes to sleep, with the time, date and notification icons always visible when the phone is off.

There are lots of parts to the LG G5. Does it all add up to a best phones contender when the Samsung Galaxy S7 is also launching at MWC 2016? Let’s explore.

The LG G5 looks and feels completely different from last year’s phone and that’s thanks to the seamless metal body that rightfully kicks plastic to the curb. You won’t find any plastic here.

This isn’t a metal finish, either, like the metallic painted LG G4 variant that was plastic through and through. The all-metal phone body feels smooth, though a bit hollower than an iPhone.

However, unlike Apple’s handset, the LG G5 won’t be notorious for antenna lines. It doesn’t have any of those unsightly bands, instead rely on Micro-Dizing to cover up antenna slits.

This allowed me to focus on the colors: it comes in four shades, Silver, Titan, Pink and Gold. There’s nothing too outrageous here in terms of new colors. LG G5 plays it straight.

In fact, this is an LG that phone plays it so straight that it no longer curves like the LG G4 or its curvier cousin, the LG G Flex 2 from last year. It still feels easy to hold in one hand.

I can reach apps across the entire display without resorting to using two hands, which ties into LG’s goal of making the phone all about ease of use and something to recommend to mom.

LG G5’s volume buttons have shifted to the left side of the frame, ending the company’s streak that, controversially to some, had had the buttons flank the power button on back.

While I got used to the rear-facing volume rocker and clean edges, LG’s signature feature was a flaw to many. I’m indifferent about the new side volume rocker. It’s no better or worse.

The still-back-facing power button doubles as a fingerprint sensor, and it’s definitely better than what LG has experimented with on the LG V10, even if it’s still too small.

Like the Nexus 5X and Nexus 6P, it can light up the phone and unlock without actually pressing the button down. It’s not a two-step processor like it was on the press-in-and-hold-hold-hold LG V10.

What I don’t like as much is the headphone jack and speaker placement. Headphones plug into the top, unless you have the 32-bit Hi-Fi DAC module. It adds a second headphone jack to the bottom. Odd.

Worse, the speaker is on the bottom. I was really hoping that the LG G5 would upgrade us to a pair of front-facing speakers for stereo sound without resorting to headphones. Not this time around.

LG has upgrades its bottom port, however. It uses a USB-C connection, which means all of your micro USB cables are useless. The advantage? It’s reversible, unlike all other USB forms.

That’s a huge win for anyone taking advantage of that always-on display and plugging in their phone in the dark. Just be prepared to carry around both cables, as micro USB is probably going to be used by every other gadget and accessory you own for the next few years.

The LG G5 doesn’t try to squeeze more pixels into its 5.3-inch display, and that’s something I’m actually happy to see. Quad HD resolutions are the ceiling that no one needs to break.

Lighting up the phone screen proves there’s little difference here. The smaller size increases the pixels per inch to about 554ppi, but everything else looks similar, including the brightness.

LG has, instead, upgraded its IPS LCD to include always-on display functionality, something you won’t see until the phone is asleep. It keeps most of the screen in black, but leaves minimal information there, like the time date and notifications.

This is useful because, without a smartwatch, I check my phone almost 100 times a day to look at the time and various notifications. LG says people do this up to 150 times a day.

Whatever your number is, an always-on display puts the essentials at your fingerprints without ever waking the phone or its power hungry processor.

The Moto X Style display does something similar, but the LG G5 pulls it off without the need for hand-waving gestures to trigger a bunch of IR sensors. It’s the true meaning of always-on.

LG says the battery only drains an extra 0.8% an hour with its new second screen, and that seems like a great trade-off at first blush.

But that adds up to be 19.2% after a full 24 hours. It may not be worth keeping this feature if you don’t have a smartphone-glancing obsession.

The LG G5 specs have a shot at keeping up with the Samsung Galaxy S7 thanks to the fact that it uses Qualcomm’s latest processor and 4GB RAM, a must-have for flagship handsets in 2016.

There’s a Snapdragon 820 processor pumping at the heart of this new LG phone, and that really contrasts with the LG G4 when it comes to raw horsepower.

A year ago, the company purposely held back on the troubled Snapdragon 810 processor by using the steadier Snapdragon 808 chip. Samsung ate its lunch (and everyone else’s, too).

It’s now a more level playing field between the two South Korean phone giants. The advantage for LG is that it includes a microSD card slot – with adoptable storage.

That expands its standard 32GB configuration, the same as the LG G4, to a theoretical 2TB, though someone has to make a microSD card in that XXL size first.

LG’s user interface gets a splash of paint, but it’s not a total overhaul. Icons appear to be a little more rounded and the quick settings menu isn’t so drab.

It’s all combined Android 6.0 Marshmallow, which should prove useful for its battery-saving Doze mode more than anything else.

Scrolling through menus on the LG G5 felt smooth enough, but that was without all of our apps loaded onto the device.

It was just LG’s pre-loaded medicore software, the one thing I wish wasn’t here, so I’m skeptical. I’m also wary of the fact that LG got rid of the app drawer. Everything is loaded on the main home screens, a lot like an iPhone.

We don’t have LG G5 benchmarks just yet, but when we test out the phone for its final review, we’ll be sure to add them and compare them to the Samsung Galaxy S7.

The thing I like about LG and its smartphones is that it always seems to take chances with new technology, and that’s fully realized in the dual camera that is on the back.

It uses both a 16MP and 8MP camera, and while the smaller 8MP number makes that second camera automatically seem inferior, it’s my actually favorite due to its use of a wide-angle lens.

At a dramatic 135 degrees, the camera actually sees more than the human eye of about 120 to 124 degrees. It’s field of view is able to capture everything you see and more.

That means the large iconic building or tower behind you in photos can be captured without your photographer having to back up to a seemingly infinite degree.

The few indoors photos I was able to capture looked good, but it’s really going to be put to use when we’re able to break it out of a tiny conference room and snap away on the street.

I did take notice of the proper zoom controls. Gradually transitioning between the two cameras can happen with a new slider menu, or through a toggle switch like on the LG V10.

What is missing is a selfie camera that does the same. While the LG V10 really impressed me with its wide angle front-facing camera, it’s not here. I want the best of both world, and this one falls short of providing that.

Launching with an entire posse, the LG G5 already has accessories that are supposed to take the phone to the next level. I like the ideas of each, but unconvinced since they’re not built in.

The LG Cam Plus replaces the phone’s metal chin with a rubberized camera grip that juts out the back. It has physical shutter button and zoom in and out controls and a 1,200mAh battery.

It was a bit more satisfying to have the autofocus by half shutter key, but it’s not really enough to make me want run out and upgrade my LG G5 with a strange camera grip bump.

The same can be said about the H-Fi Plus. It’s a portable Hi-Fi digital-to-audio converter. It’s smaller, but still extends the size of the phone by replacing the metal chin.

Tuned by Bang & Olufsen, LG has cornered the market on 32-bit Hi-Fi DAC in the mobile world. It did a nice job of this on the LG V10, but even there it was built in and not an accessory.

These “friends” as LG called them, make the LG G5 smaller in size, but I’m skeptical that I’m going to go out and buy them and want to use them on a regular basis.

The LG G5 battery life is still a big question mark given its newly confirmed capacity. It’s just 2,800mAh, down from the 3,000mAh battery of the LG G4 last year.

The biggest benefit may be the fact that the LG G5 battery can be swapped out for a fresh one at any time. It’s easy enough to change out and carrying a second is smaller than taking a portable battery pack.

We’ll be sure to run extensive battery tests on the LG G5 and take note of how it performs while not using it to see if Doze mode has an impact on this handset.

The LG G5 has a seamless plain look, side-mounted volume buttons, a fingerprint sensor and a 5.3-inch display, making it like the metal version of the Nexus 5X with an extra tenth of an inch. That’s okay, because LG also built the Nexus 5X and it was a great phone for its price, and the two phones only look similar on the outside.

Inside, the LG G5 specs provide a significant upgrade, with a wide angle second camera on back, always-on display on front and the promise of modular accessories. The microSD card slot and removable battery remain, while the new Qualcomm Snapdragon 820 touts significant speed boosts. It’s unlikely to launch before the faster-to-market Samsung Galaxy S7, but it should be enough to give you some pause before you use Android Pay to check out.