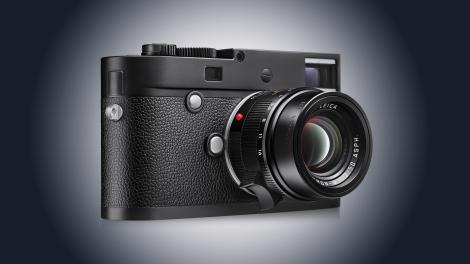 Unlike the sensors inside the vast majority of digital cameras, the sensor inside Leica’s Monochrom doesn’t have a ‘traditional’ RGGB Bayer pattern filter. This means that it can’t produce colour images, only black and white – hence the camera’s name. It also means that each photosite on the sensor is used to create a pixel in the image without any interpolation. The end result is black and white images that have much more detail and dynamic range than images shot on a standard camera whether you shoot in colour and convert a raw file, or shoot black and white JPEGs.

The original Leica Monochrome was capable of producing superb quality images, but its handling was rather awkward and some of its specification decidedly old-hat, especially for a camera with such a huge price tag. Judging by the specification of the new version (Typ 246) and the few minutes I was able to spend shooting with it, Leica has taken significant steps to correct these issues.

Whereas the original Monochrom used an 18Mp full-frame CCD sensor from Kodak, the new version has a 24Mp full-frame CMOS sensor from a Belgium-based company. Leica claims that this brings much greater dynamic range than the previous model – and noise control should be improved despite the hike in pixel count.

The sensor is combined with the new Leica Maestro processor and together they enable a sensitivity range of ISO 320-25,000. The previous version topped out at ISO 10,000, and this indicates the confidence that Leica has in the new camera’s noise control. If the 1/4000sec maximum shutter speed won’t allow you to use wide apertures when you need to you’ll have to use an ND or coloured filter to cut out some light as the Type 246 doesn’t offer the ISO 160 ‘Pull” sensitivity that the original did.

Other significant changes include a 100% increase in buffer size (up to 2GB) to speed image processing, the addition of Live View mode complete with focus peaking (with red, green or blue highlights) and the ability to shoot full-HD video. There’s even an optional electronic viewfinder to give a Live View image.

One issue with the original Monochrom was the low quality of its 2.5-inch screen. Thankfully this has now been upgraded to a 3-inch 921,600-dot Sapphire glass unit with an anti-reflective coating.

You have a certain expectation about the build quality of Leica M cameras and the Monochrom Typ 246 doesn’t disappoint. It feels incredibly solid and well-crafted. Its splash-proof metal body is designed to last a lifetime. However, while it feels well-made, it isn’t especially comfortable to hold, having a combination of flat surfaces and strong edges. That said, I found it was reasonably secure in my hand, but given its cost I doubt many photographers would risk using it without a strap.

The Monochrom Typ-246 is based upon the M-P Typ 240, which means that is has the same minimalist control layout, but there are a few handling improvements on the older Monochrom. For a start, the exposure compensation is easier to access, instead of being buried in the menu until being assigned to the rear dial, it is now accessed by pressing and holding a button on the front of the camera while rotating the rear dial. This button and dial combination is also used to access the focus assist magnification in Live View mode. I thought it might be easy to mix these two up and make the wrong adjustment, but actually I found I got the right option every time. I’ll look at this a bit more when we perform our full test.

Being an M camera focusing is entirely manual. When using the viewfinder, which seems more natural with an M, you rely on aligning two images at the centre of screen in the usual rangefinder way. This takes a bit of getting used to if you’re unfamiliar with this technque, but it doesn’t usually take long before most people are focusing quite quickly.

If you use the Monochrom’s Live View mode you’ll be able to see the image as it will be captured, in black and white and with the appropriate framing instead of relying on the bright lines of the viewfinder. You can also use focus peaking to guide focusing. In the short time that I had with the camera, I had mixed success with this. In some instances the bright red lines were very clear, but in others less so. I’ll investigate this more when we get a sample in for testing.

As with the previous model, the viewfinder displays very little information, if the exposure is incorrect, for example, you only see the direction in which it should be adjusted, not the degree of adjustment that’s required. When you shoot in aperture priority mode, however, you see the shutter speed that the camera is using.

I shot with the Monochrom for a few moments on a bright sunny day and although the screen suffered a little from reflections, it fared pretty well. I used the Live View a few times purely to test it, and it worked well, but as I said earlier, the viewfinder seems a more natural choice when shooting stills.

Naturally we will reserve final judgement until we get a sample for full testing, but on the basis of what we know about the original camera’s capabilities and the sample shots that I’ve seen from the new model, I think it’s safe to say that the Monochrom is a great camera if you are a dedicated black and white photographer.

Noise appears to be controlled well and is fine-grained in images captured at ISO 12,500. Their dynamic range is also high.

As before, the camera appears to prefer quite dark, moody images, but the majority of users are likely to want to use the camera as a data gathering device and adjust the DNG raw files to get the best result possible.

It will be interesting to see how many people are interested in shooting black and white video.

Leica’s reputation is such that there are many people who have a lifelong ambition to own a Leica camera. I’m not one of those people. I like traditional controls, but I like modern niceties like autofocus, an ergonomic shape and smattering of customisation options as well as quick access to key features. The Monochrom Typ 246 is a little awkward to hold, has a focusing system that many would consider outdated and a limited number of features and controls. I shouldn’t like the Monchrom, but I do. In fact I think I love it. Given its huge price I’m hoping that I fall out of love with it when it comes in for testing.