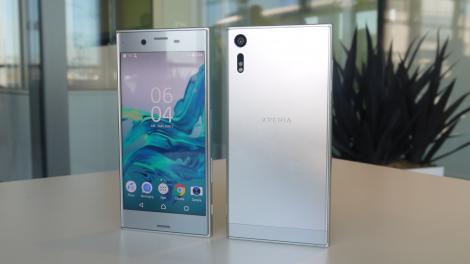 The debate over whether the Sony Xperia X, which launched in February this year, was a flagship phone or not, has finally been settled – it wasn’t, but the Xperia XZ is.

This brand new flagship is the highest spec device in the growing Sony Xperia X range and it offers a lot of what we’ve seen before, but in brilliant new packaging.

Sony has been refining its iconic boxy phone design for seven generations now, ever since the Xperia Z back in 2013, and that process has led to the XZ, which whether you opt for it in deep blue, black or silver is by far one of the best looking phones the Japanese company has ever produced.

The sharp edges of the Xperia Z range have disappeared, replaced here by more rounded ones in a conscious change to help the Xperia XZ sit better in the hand.

It’s a reasonably minor change, but it makes the experience of holding an Xperia phone much more comfortable. This is a problem Sony should have solved long ago and is a big improvement for the company’s latest handset.

Not only is the look refined, but also the feel, as the back of the Xperia XZ is made of a new metal material from Sony called ALKALEIDO, which doesn’t feel slippery in the hand. It gives the phone a premium finish and is a big step up from the glass-backed Sony Xperia Z5, although the new material does still pick up fingerprints quite easily.

The top and bottom edges of the Xperia XZ are completely flat, which is another design change and allows you to stand the phone up on its end. The flat design is reminiscent of the top edge of the Obi MV1, but executed much better.

There’s a fingerprint sensor hidden away in the power key on the side of the phone. This positioning makes the sensor easy to hit when the XZ is in your hand, but the button can be a bit of a pain to reach when the phone is sat on a flat surface.

Perhaps the biggest design change is the inclusion of IP68 waterproofing – that’s the same rating given to the Samsung Galaxy S7 and the Sony Xperia Z5. This means you can dunk your Sony phone once again without having to worry about it breaking – a feature many missed in the original members of the Xperia X series.

You may be disappointed to learn Sony has stuck with a Full HD display for the Xperia XZ, especially as this is the firm’s most premium handset – but it’s still a great screen. Some were expecting the Xperia XZ to come with a 4K display like the Xperia Z5 Premium did, but that was mostly a gimmick and your battery will thank you for sticking to 1080p.

The screen is 5.2 inches and 424 pixels per inch, and, while sharp, doesn’t touch the likes of the QHD Samsung Galaxy S7 Edge or HTC 10, so while 4K would have been unnecessary a 2K resolution would have been nice to see.

On paper the Xperia XZ’s main camera looks quite similar to previous iterations, but minor improvements should make the XZ’s snapper much more enjoyable to use.

The camera uses the same 23MP Sony sensor as the Xperia X, with all the tech you’ve seen in the past, but it now includes a laser autofocus.

Working alongside the predictive hybrid autofocus technology this should make it even easier for the phone camera to focus your shots – though how well it works remains to be seen.

The 23MP sensor also comes with new white balance technology to help enhance the color of your photographs and improve fine detail (a common problem with Sony’s sensors). In a smartphone first the XZ also uses 5-axis stabilization tech to ensure your video doesn’t come out blurry.

Flip around to the front and you’ll be greeted by a 13MP sensor, allowing for detailed selfies. It looks to be the same camera as the selfie shooter on the Xperia X, which worked well.

Under the hood the Xperia XZ sounds suspiciously like the Xperia X Performance. The XZ boasts a Qualcomm Snapdragon 820 processor along with 3GB of RAM, and in our hands on time the phone felt as speedy as you’d expect a flagship to be. If you’re looking to run Pokémon Go or any other mobile game, you’ll be able to with this phone.

Storage-wise you’ll have 32GB or 64GB to play with depending on how much you’re prepared to spend. There’s no word on microSD support yet, but Sony usually includes a card slot, so we’d expect to see one in the XZ.

On the battery front there’s still no sign of wireless charging – but Sony has improved the juice pack in other ways, as the 2900mAh cell will recharge at different speeds depending on your charging habits.

If you often take your phone to bed at midnight and unplug it at 7am, the Xperia XZ will charge to 90% as quickly as possible but then pause the charge until just before you wake up.

The idea here is that leaving your phone on charge can damage the battery over time – so by predicting when you’ll need the XZ charged up, Sony should be able to preserve your battery for longer.

Since there’s no wireless charging you’ll be using the USB-C port on the bottom edge of the phone. This is the first time Sony has embraced USB-C, and although the change may mean updating a few of your accessories USB-C is a lot more convenient, as you can plug your charger in either way around.

This charging tech is sure to become the industry standard soon, so it’s great to see Sony preparing for that, rather than getting left behind.

Sadly, the Xperia XZ runs Android 6 Marshmallow, but a Sony representative assured TechRadar that the company would be working hard to bring Android Nougat to the phone as soon as possible.

The Sony Xperia XZ feels a little lost in the mix, with a very similar spec list to the Xperia X Performance and Xperia Z5 series, but the design tweaks have made a major difference to the appearance of the phone, making the Xperia XZ one of the best looking handsets of 2016.

New camera technology shows the company is trying to improve its 23MP sensor too, while extra innovations such as the USB-C tech feel like a step forward, but a small step and not a reason to buy a brand new Sony phone.

If you own a Sony handset from the last year there’s no key reason to update to the Xperia XZ, but if you’re after a top of the line device and like the look of the XZ’s refined design, this is going to be a great choice for you.