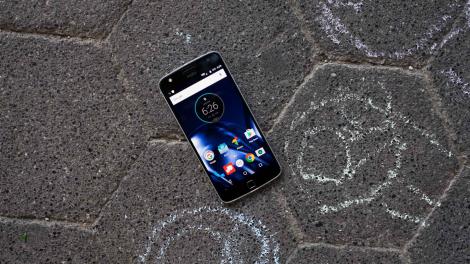 Moto Z Play is the thicker, long-lasting and more affordable smartphone with creative modular accessories, and proof that Motorola is committed to the idea of a customizable phone.

You can snap on a bunch of different mods – from stylish battery packs, to a mini boom box, to a head-turning pico projector – all with the help of magnets.

Timed with the Moto Z Play launch is a new mod: the Hasselblad True Zoom camera. It makes your Android phone look and feel like a real camera with 10x zoom and physical controls.

All of these MotoMods, new and old, work across the three modular Motorola phones, including the ultra-thin Moto Z and shatter-resistant Moto Z Force.

The Moto Z Play isn’t as flashy as the world’s-thinnest-title-holding Moto Z, and it doesn’t have the durable screen of the Verizon and US-exclusive Moto Z Force. It’s also less powerful.

What it does have is a bigger battery, cheaper price and a headphone jack. You can charge via USB-Type C and play music over the normal 3.5mm jack here, unlike on the Z and Z Force.

Moto Z Play therefore fixes some of the gripes with the Moto Z, and opens modular smartphone accessories to a whole new audience looking for a cheaper phone. Let’s see if it fits your needs.

If you were interested in the Moto Z, but scoffed at its high price, then you’ll like the savings that the reduced Moto Z Play brings at launch.

It’ll cost $408 at full price when tied to Verizon, or at $17 a month over 24 months through the carrier’s device payment plan. Fully unlocked from Motorola, it’ll cost $449 in the US, which converts to £343 in the UK.

That contrasts with the Moto Z, which currently costs $624 at full price from Verizon and $699 unlocked. The Moto Z Force is even more at $720 without a binding contract, but still only available through Verizon.

The Moto Z Play is a thicker-than-average phone that takes several cues from the flat design of its Moto Z counterparts. It measures 156.4 x 76.4 x 6.99mm and is 165g.

Even with the same 5.5-inch screen size and non-curved back, it feels big in one hand. It’s still palmable on its own, until you magnetically attach accessories. Then it becomes a real monster.

The good news is that its extra girth gives you the ability to listen to music and charge at the same time. It sounds crazy to list this as a pro, but missing headphone jacks are a common thing now.

The Moto Z and Moto Z Force annoyingly don’t include a 3.5mm headphone jack, instead sending audio over their USB-C ports and requiring an (included, but easy to lose) adapter.

The other good news is that the Z Play has just about every other design feature we liked about the initial Moto Z line, including the small but incredibly convenient front fingerprint sensor.

The fingerprint sensor takes up a lot of room and extends the phone’s chin, but it works to our liking by both waking the phone and putting it to sleep with one touch.

Being able to both lock and unlock the phone without having to hunt for the side sleep/wake button on the frame is a tremendous advantage for Motorola’s new phone series.

It’s an especially big deal (for a bad reason) because the side power button is equidistant to the volume down and up buttons. It’s easy to get it mixed up with their non-rocker volume button design.

It also lacks the Moto Z Force’s trademark feature: a shatterproof glass screen. Drop this one from the same five feet of height and you’ll probably regret it.

The Moto Z Play comes in a two of colors so far: black with a silver frame and fringe, and white with a gold frame and trim.

The Moto Z Play takes advantage of all existing MotoMods and they seamlessly snap onto the back of the phone using magnets. The only thing that’s cumbersome is it’s suddenly thicker size.

With the Power Pack battery accessory, for example, suddenly the phone feels three times as big as it should. You may not need the battery pack considering the Z Play’s heftier battery size, thankfully.

You will (and should) enjoy the back covers (called Style Shells, according to Motorola) because the Z Play as a reflective glass back and exposed 16 modular pins that aren’t nearly as appealing.

The coolest mod is the Moto Z Insta-Share projector. It’s a mini projector that shines your phone’s screen anywhere you want at a size of 70 inches before distortion kicks in.

It’s easy to use, living up to the instant name, and is an easy way to shine YouTube videos anywhere in the world (except ironically in Lenovo’s own home country of China where Google services are blocked – but everywhere else). Video looks okay at 480p, and will save your back from lugging around a big, heavy projector

This projector fits in a pocket (though barely, at size close to 70mm) and has an embedded kickstand for tilting and automatic keytoning. Focus can be adjusted manually via a side dial.

The Insta-Share projector requires a dark or very dim room for its 50 lumens to be effective and, of course, it doesn’t come cheap: it costs $299.

Motorola and JBL turned the smartphone volume up to eleven with their SoundBoost creation. It tuns the back of your phone into an even thicker frame, but one that becomes a powerful speaker.

It’s not as loud as a dedicated Bluetooth speaker, but it’s almost as good. You won’t feel the need to turn it up if it’s just you and a small party. Best of all, there’s a hand kickstand and it adds 10 hours of battery life.

Looking for a Mophie case? Don’t. MotoMod juice packs add 2,200mAh of battery life in exchange for a few millimeters to the thickness. Unlike the Z, the Moto Z Play can’t really afford this extra girth.

It comes in a variety of designs, including from designers like Kate Spade and luggage maker Tumi. It’s really trying to combine style and functionality, and it’s easier to clip on compared to a Mophie case.

You don’t have to buy a MotoMod right away to satisfyingly lock an accessory to the back of your new phone with magnetics. Moto Z comes with a Style Shield in the box.

Wood, leather and plastic options are going to be available in the future, giving you some degree of customization over your ever-important handset, just like the Moto X series.

Further out, there’s a lot of potential for MotoMods. Motorola is opening up its platform to one and all with a $125 developer kit.

Moto Z Play has a 5.5-inch Super AMOLED display, the same size and technology as the Moto Z and Z Force, but it brings the resolution and pixel count down.

It’s a 1080p Full HD screen with 403 pixel per inch instead of a 2K resolution (also known as Quad HD). It doesn’t look as stunning, but it’s still beautiful enough that you won’t complain.

Even with the resolution change, the Moto Z Play display keeps Motorola’s Active Display intact. Wave your hand over the phone and it senses your presence with limited information, like the time, date, and notificats – all of which requires barely any power.

It’s like the always-on screen used in new Samsung and LG phones, but one thing that’s better is the discrete notifications icons are interactive here.

Tapping on one reveals more information, like the beginning of an email body. Flicking the icon upward opens the message. Flicking it down dismisses it. Motorola score major points with this minor touch here.

The Moto Z Play also takes the specs down a notch with the Qualcomm Snapdragon 625 processor instead of the Snapdragon 820 chip almost every major Android uses in 2016.

It’s still competent with a 2GHz octa-core CPU, 3GB of RAM and an Adreno 506 GPU, but it’s not as fast as the Moto Z or Moto Z Force.

We experienced bit of slowdown when downloading apps, using the GPS and trying to navigate the menus. True multitaskers, watch out. Everyone else will be fine.

You’ll also be okay with the 32GB of internal storage, even if phones like the ZTE Axon 7 and Samsung Galaxy Note 7 have launched with 64GB. Moto Z Play includes a microSD card slot within its nano SIM tray for expandable storage.

Moto Z Play runs one of the latest versions of Android and it functions like Google intended it, without the alterations that Samsung, LG, and other phone makers see fit.

Stock Android is a big deal for many purists, and for good reason. This Android 6.0.1 interface is streamlined. Motorola, once a Google company, doesn’t deviate far from its former parent’s playbook.

It adds a few of its own apps to the phone, like Moto Actions and Moto Voice, but these are only a help, not a hinderance. All of the menus are just like a Nexus running stock Android.

In the US, you’ll have to deal with some pesky Verizon bloatware, and the fact that HD video calls only work with people on the same network, even if they have the same phone, is annoying.

You’re also missing out on Android 7.0 Nougat, which just launched on the Nexus 6P and Nexus 5X, and it coming to the brand new LG V20. It has desirable features like splitscreen apps. The wait for the Android Nougat update is on, even before the Moto Z Play is in your hands.

The Moto Z Play has a 16MP camera with an f/2.0 aperture, and it provides around the same picture quality as the Moto Z. The Moto Z Force is slightly better with a 21MP camera.

It combines laser autofocus and phase detection autofocus that translates into zero shutter lag, but it doesn’t have the best low light capabilities and lacks optical image stabilization.

It does have a color-balancing dual LED flash, which won’t go unnoticed. The camera and flash bump is huge on this camera, even though it’s not always the best.

The front-facing camera is 5MP, with what Motorola touts as a wide-angle 85 degree lens. It captures more of your selfie scene than an iPhone, sure, but not as much as an LG V10 at 120 degrees.

Video capabilities here are solid enough, with a resolution up to 4K and 120fps slow motion video at 720p.

Motorola is promising 50 hours of mixed use from the Moto Z Play battery, and we’ve so far gotten between one-and-a-half to two days from our heavier-than-average phone addiction.

That extra phone use time is thanks to the 3510 mAh battery capacity. It makes the phone thick, but it’ll get you through more than a day without fail.

When the Moto Z Play battery does deplete, it charges back up pretty quickly care of its included TurboPower charger. Motorola promises 10 hours of power after 15 minutes of charging.

Moto Z Play is all about playing longer and doing it all with ease. Its extended battery life and embedded headphone jack give us what we want (and expect) from a smartphone.

Yes, it’s rather thick and the 1080p display isn’t going to wow your friends. However, it has the same impressive Moto Active Display proximity sensing capabilities and the double-duty fingerprint sensor that turns the screen on and off.

We’re running more battery life and charging tests to make sure the Moto Z Play consistently lives up its claims. Look out for an updated Moto Z Play review soon.