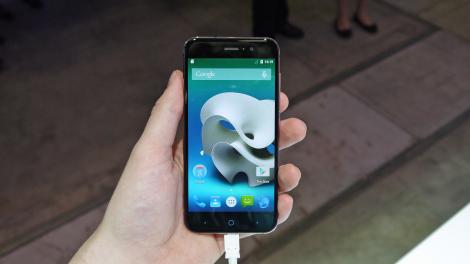 The ZTE Blade V6 was described as a “mass market, premium device” during its launch at IFA 2015. And to be fair, the Chinese firm may have a point.

It’s promising to apply a “very good price” to the Blade V6, although we’re yet to hear exactly how much it will cost. Previous Blade handsets have come in towards the lower end of the market, and I fully expect the V6 to follow suit.

The Blade V6 is due to hit Europe during the second half of 2015, which we’re already firmly into, and ZTE hasn’t yet confirmed which countries will be getting it.

In terms of design the ZTE Blade V6 sports more than just a passing resemblance to the iPhone 6, with its rounded metal body and top corner placement of the rear camera a clear nod towards Apple’s layout.

Look a little closer though and it’s obvious this isn’t an iPhone. The navigation keys below the screen consist of a touch sensitive, circular home key while the other two are hidden. You’ve just got to hit and hope.

It is attractive though, and the all metal body feels nice in the hand. At just 6.8mm thick it’s delightfully slender – thinner in fact than the iPhone 6 and Galaxy S6. Power and volume are on the right, in easy to hit locations.

The speaker placement on the Blade V6 is also pretty annoying. It’s located on the rear in the bottom left corner, meaning it’s nearly always covered by your hand.

You can pick the Blade V6 up in grey, gold, silver and the fetching pink hue I got hands on with.

The 5-inch 720p display on the Blade V6 is pleasingly bright, but the glass which protects it is a real fingerprint magnet. I was constantly having to wipe the screen as it became grubby after just a few taps.

A piece of good news is found on screen in the form of stock Android. ZTE has resisted the urge to stick its MiFavor interface on the Blade V6, offering up the far more attractive Android Lollipop.

With a 1.3GHz quad-core processor and 2GB of RAM Android runs smoothly, with general navigation around the handset lag free. It’s not the quickest to load apps, but it’s certainly not slow.

There’s 16GB of internal storage, which certainly isn’t terrible, but a handy microSD slot allows you to expand on that.

I was impressed with the camera setup on the ZTE Blade V6. On the front you get a 5MP snapper, and on the back you’ll find a 13MP option.

I found shutter speed to be responsive and snaps to be bright and clear, even in a busy, poorly lit event space. HDR mode helps improve your shots further, making the V6 a handy budget cameraphone.

The battle for the ZTE Blade V6 will be won and loss with its price tag. Make it competitive with the Moto G and ZTE could be onto a winner, but price it too high and there are better options out there.

The Blade V6 is well designed, packs some solid features and the inclusion of stock Android helps to elevate above rival Chinese handsets from Huawei and co.