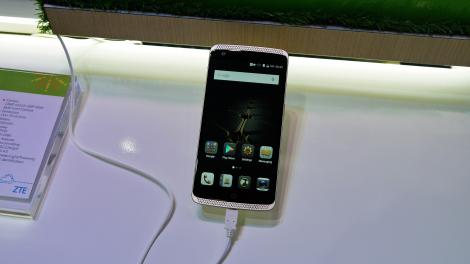 The ZTE Axon Elite is the world’s first smartphone to sport three forms of biometrics; voice, fingerprint and eye.

Aimed at the top of the mobile market it certainly comes with plenty of bells and whistles to help it standout from the crowd. The Axon (minus some of the fancy biometrics) has already launched in the US, but from September 24 it’ll be rolling out to countries in Europe.

There’s no word on price just yet, but considering the tech ZTE has stuffed inside, it’s probably safe to assume it’s not going to be cheap.

The first thing you notice when you clamp eyes on the Axon Elite is its overly elaborate dual front facing speaker grills. The almost tribal pattern is a signature design for the handset and it is striking, but I don’t think it will be to everyone’s taste.

While ZTE maintains the Axon Elite sports a premium design, in the hand it doesn’t quite feel that way. The metallic finish doesn’t ooze high-end, while the leatherette patches on the rear feel cheap and look ugly.

At 9.3mm thick it’s also pretty chunky by modern smartphone standards, and paired with its 5.5-inch display and dual speaker grills the Axon Elite is a bit of a beast in the hand.

The height is increased further with the addition of navigation controls below the screen, rather than on it, which can make it a little tricky to wield effectively one handed.

ZTE has split the power/lock and volume keys here, with the former on the right and the latter on the left. What this means is both can be positioned towards the centre of the handset, making them easier to hit than if they were higher up.

The 5.5-inch display sports a full HD resolution, which appears to be the popular spec for Chinese handsets at the moment. It’s bright and colourful, as well as responsive, making the Axon Elite easy to use.

It’s running a slightly older version of Lollipop, Android 5.0.2 (we’re currently on 5.1.1), but you won’t be able to tell as it’s been drenched in ZTE’s MiFavor user interface.

As with Huawei’s custom interface, I find MiFavor lacks professionalism and premium appeal. This creates a jarring experience as the hardware is trying to be high-end, but look at the on-screen display and it ends up looking a bit like a toy.

The icons and colour schemes have been totally re-done, and ZTE has removed the app tray that has served the Android faithful well for many years now. That said, Apple’s iOS stores all your applications on home screens, so it’s not like ZTE has done something crazy by ditching it.

The interface is fast and fluid, with an octa-core Snapdragon 810 processor and 3GB of RAM running the show. You also get 32GB of internal storage, plus a microSD slot which allows you to expand further.

There are two standout features on the ZTE Axon Elite making it worth taking about – its biometric abilities and dual-camera setup.

Look into my eyes

First up is ZTE’s eye scanning tech, which allows you to unlock the handset with not a pin, pattern or password, but your actual eyes. The ones on your face. It’s pretty cool.

Setup is easy. Just head to the settings menu and the Axon Elite will quickly scan in your eyes – although you do have to hold the handset quite close to your face. I’d recommend doing this in private to avoid looking a little odd.

Once your blinkers are registered you’re good to go. Lock the handset, and then hit the power key to wake the screen. Drag down from the top and you’ll see the front facing camera take a quick peek at your eyes. It takes around a second (if you’re holding the phone in the right place) to unlock.

It is quick, but it’s not as fast as the fingerprint scanner on the rear which is just as secure, yet a lot more convenient. You still have to hold the Axon Elite pretty close to your face to unlock, so you’ll look a bit strange walking down the street.

And it’s that convenience which kills the joy of the eye scanning feature. I was really excited to try it out, and sure I had fun playing with it, but I don’t think I’d use it day to day.

The fingerprint scanner is excellent, and it’s easier and quicker than the eye scanning.

There is a third option though – voice unlock. Unfortunately the event space was too noisy for me to register my dulcet tones, but I suspect it won’t be as easy as the finger scanner.

Moving on to feature highlight number two, there are two cameras on the back of the ZTE Axon Elite. It’s not the first phone to do this, in fact there have been a number which have sported dual-cameras before it, but for ZTE it’s a big talking point.

The 13MP camera sits 20mm above a secondary 2MP snapper, and ZTE says that distance is key for the re-focus tool it provides on screen.

With two cameras you have access to a true re-focus tool, rather than a digital augmented version. This means you can adjust the focus of your snap after taking it. Want to switch focus to the rear? Fine, go for it. And vice versa. Again, we’ve seen this on a number of handsets, but it works nicely on the Axon Elite.

There are a range of other features included in the camera including Bokeh, 4K video recording, a fully manual mode, multi-exposure and super-aperture. Round the front you get an 8MP camera, perfect for selfies and the like.

A non-removable 3000mAh battery seems small for the ZTE Axon Elite considering its size, but that’s what you get.

It does however come with Quick Charge 2.0, allowing you to get 120 minutes of call time from a 10 minute charge, while half an hour of plugged in time will replenish the battery by up to 60%.

Its design won’t be everyone’s cup of tea, nor will the interface on the ZTE Axon Elite, but it does have a few features which help it stand out.

The eye scanning tech is fun to play with and will be great to show off to mates down the pub, but you’ll likely end up using the fingerprint scanner day to day purely for convenience. Meanwhile the dual rear camera doesn’t break any new ground, but it’s stuffed full of functions giving you a lot to play with.

The plus points are intriguing, but I can’t see where the Axon Elite will fit into the market and it may struggle to really make a name for itself.