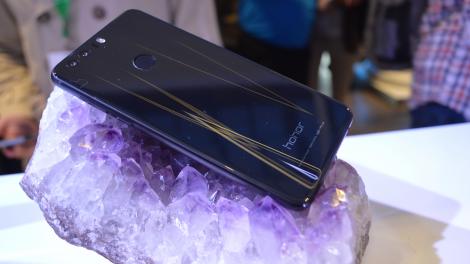 Honor, sister company to the more well-known Huawei, wants to make a name for itself outside of its native China.

It’s had forays out west before, but now it’s launched the Honor 8 in the US. At $399.99/$449.99 (no UK or AU pricing yet), it’s a device Honor hopes attracts users – millennials, in particular – with flagship-style specs without the price that usually goes along with the breed.

The Honor 8 is indeed a phone with some boast-worthy particulars. Its screen is a silky 5.2-inch Full HD, 1080p affair that’s bright and crisp. A 3,000mAh battery, slightly smaller than the Honor 7‘s, is still respectable, at least on paper. It has a proprietary Kirin 950 processor, 4GB of RAM and 32GB or 64GB of internal storage, which is expandable to 128GB thanks to a microSD card slot.

A fingerprint scanner, USB Type-C, some nifty if superfluous software tricks and dual 12MP rear cameras – the Honor 8’s marquee feature – round out the phone’s call sheet. It’s a good Android phone, one that goes toe-to-toe with the likes of the Huawei P9 and OnePlus 3, the latter of which we dubbed a “genuine flagship killer.”

But what keeps the Honor 8 from climbing higher into true flagship-killer country is that it doesn’t offer much that we haven’t seen before. Is a flagship wannabe with an affordable price enough to tempt phone buyers? That’s an answer we’re saving for our full review.

What’s obvious about the Honor 8 is that it feels good in the hand. It has smooth, rounded edges, so it feels like one solid piece. A pane of glass on the back keeps that cohesiveness going, and there aren’t any bumps on the phone, save for buttons on the side.

At 7.5mm, it’s thin, but has enough mass that it doesn’t feel flimsy or cheap, like you might snap it in half at any minute. Available in white, sapphire blue and black in the US, the Honor 8 is an attractive phone, though it’s fairly nondescript unless its display is on.

One glaring issue with the glass back is that it smudges easily, and while fingerprints aren’t so obvious on the white model, the black and sapphire versions were visibly covered in prints after a short time. If you’re bothered by a dirty phone, you may have a problem with the Honor 8.

The fingerprint scanner on the back is easy to access and fast, and it doubles as a “smart key” button that provides some useful functions. Giving it different presses – one, two or a long hold – will open various apps or shortcuts, such as pulling up Lyft or turning on your flashlight. It’s easier than swiping through your phone to find what you’re looking for, though it might take some getting used to.

The speaker and microphone are located on the bottom, which Honor warns not to cover up when you’re using it. We’ve run into the issue of muffled speakers on other Huawei phones, so it doesn’t seem like Honor saw fit to address it this time.

A curious feature of the Honor 8 is something the company calls knuckle gestures. You essentially rap your knuckle against the screen, then draw a letter or shape that are actually commands. Drawing an “m” pulls up maps, a “c” the camera, “e” the internet and “w” the weather. You can draw a square around your screen to take a screenshot, too.

It’s an odd feature, and one we can’t see a reason for. Why not just use your fingers to draw these letters and shapes? You have to hit your knuckle with enough force against the display to kick the gestures into gear, and it wasn’t the most pleasant feeling knocking bone against a phone. Maybe it’s useful if you have dirty fingers, but it’s still strange, to say the least.

The Honor 8’s calling card is that it has dual 12MP cameras on the back, though this is actually a holdover set-up from the Huawei P9. One sensor takes an RGB color photo, the other a monochrome photo, and together they form one cohesive image that apparently holds more detail thanks to this melding approach.

We found the Honor 8’s camera as-is to be good, not great. The images were sharp and the color rich, but they weren’t the best photos taken on a phone we’ve ever seen.

We say as-is because there are deeper settings, including a pro mode that lets you manually mess with things like ISO to take even better shots. You can tweak the focus in the standard mode, but if you really want to control how your photo looks, you have the option to do so.

Of course, this takes time and some experience using these type of settings, and it may not be for everyone to fiddle with focus and aperture before they take a snap.

The Honor 8’s camera capabilities are above average, and we were impressed with its low-light image capture, though again we weren’t blown away by the results. Perhaps if the screen was a higher resolution, the images would have truly popped, but on the Honor 8, they were good, but not something we’d be beaming with pride over.

The Honor 8 is a fine phone, one that does a lot of things right, particularly when it comes to its build quality and camera.

You get a lot of good phone for the price, but the problem for the Honor 8 is that it doesn’t offer anything must-have against similarly priced competitors. There’s nothing about it that makes you feel like you have to have this phone.

While it does beat the OnePlus 3 when it comes to microSD, that device has already made huge waves, and it’s unlikely the Honor 8 will capture people’s imaginations the same way. That’s especially true in the US, where Honor is still relatively unknown, and the Honor 8 doesn’t do much to put it in the map.