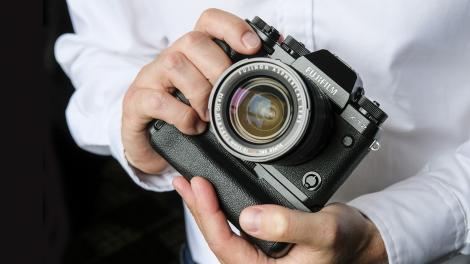 Ever since the launch of the X-Pro2 earlier this year, rumors have been circulating about the X-T1‘s replacement, and after a few online leaks of what appeared to be early production samples, the X-T2 has now be officially announced.

The X-T2 now sits alongside the X-Pro2 as the joint flagship camera of the brand, and Fujifilm believes that it now offers two distinct options for photographers. The X-Pro2, with its rangefinder design is more unobtrusive and suited to their range of primes, while the X-T2, with its more SLR-like design is aimed growing range of fast zoom lenses. Pricing has been confirmed, with a body-only price of £1,399 or $1,599.95, while a kit with the 18-55mm f/2.8-4 standard zoom lens will be available at £1,649 or $1,899.95. Fujifilm has said they expect the X-T2 to be available from September 8th.

As we saw with the X-Pro2, rather than opting for a radical new design with the second generation model, Fujifilm has elected to take the X-T1 as its starting point, refining and tweaking elements of the design to arrive at what promises to be an even more polished camera.

So if you’ve got a keen eye, you’ll notice that the ISO and shutter speed dials have been heightened slightly, while the dial locks that divided opinion on the X-T1 have been adapted, making it now possible to toggle each dial’s setting without the need to release the lock should you wish.

The X-T2 does away with a dedicated video button, instead opting to have the setting amongst the drive modes, with the thinking being that rather than simply using the X-T2 to capture the odd short video, Fujifilm wants us to see video as a more sophisticated, dedicated mode on the camera – more on that in a bit.

Moving round to the back of the X-T2, and while at first glance the rear articulated display seems to have been simply ported across from the X-T1, it does have a new trick up its sleeve. While the articulated display on the X-T1 was great when shooting landscape-format shots, whether that was from low-down or raised positions, it wasn’t much use when you came to shoot in portrait format. The X-T2 fixes that, with the new articulated display making it possible to pull the screen outwards and away from the body when the camera is tilted on its side.

Interestingly though, unlike the X70 that benefited from a touchscreen, Fujifilm has opted to admit it from the X-T2 – their argument being that having spoken with end users, that there just isn’t the hunger for it on X-series cameras. While that may be the case, some others might feel that this has been a bit of an unnecessary oversight.

Fujifilm’s also raised the 4-way buttons and as we saw with the X-Pro2, the X-T2 gets the benefit of a focus lever that the thumb can rest, making it a much quicker process to select the desired focus area you want.

Finally, the X-T2 now has dual SD card slots, and unlike the X-Pro2, both are UHS-II compatible.

One of the obstacles for a lot of mirrorless cameras to get over is the skepticism towards AF performance. Perhaps not so much for static subjects, but in the main it’s always been felt that when it comes to moving subjects, mirrorless can’t match the speed and sophistication of some more advanced DSLR systems.

However, Fujifilm not only feel they’ve improved the basic AF performance of the X-T2 compared X-T1, but believe they’ve made huge strides when it comes to continuous AF and subject tracking.

For starters, they’ve enlarged the coverage of the AF area, growing from 40% vertical and 40% horizontal coverage across the frame on the X-T1, to now cover 75% vertical and 50% horizontal, with the increased frequency of the AF search timing reduced from 280 m/secs at 3fps on the X-T1 to just 114 m/secs on the X-T2, which at the end of the day means we should expect much snappier focusing speeds.

Perhaps though the biggest development has been to the AF-C (continuous) settings, which allows the user to set three individual parameters to really tailor the AF to the subject you’re shooting.

These three parameters are Track Sensitivity (how long the camera waits before switching focus), Speed Tracking Sensitivity (determines how sensitive the tracking system is to changes in subject speed) and Zone Area Switching (with bias is in the centre, auto or front), with the X-T2 featuring five presets and a custom option.

There’s no question this looks like it could be a huge improvement over previous AF systems we’ve seen from Fujifilm. It feels much more grown-up than previous systems – if you’re a high-end Canon or Nikon user there’s lots here you may be familiar with. In the time I had with the X-T2, it certainly felt like it delivered snappier AF acquisition over the X-T1, but until it’s been really put through it’s paces with some fast-moving and unpredictable subjects, the jury’s still out for now.

The electronic viewfinder has also come in for a little bit of attention, and while the 2.36m dot OLED display with 0.77x magnification remains the same, now supports a higher baseline frame-rate of 60fps (compared to 54fps on the X-T1), while there’s now a Boost mode that sees this increase to 100fps. That’s not forgetting brightness, now up to 500cdm/2 compared to 250cdm/2.

It’s no great surprise to see the 24.3MP APS-C X-Trans CMOS sensor that we first saw in the X-Pro2 in the X-T2. Fujifilm’s latest sensor, with it’s clever filter designed to eek out even more detail compared to conventional designs, has delivered some impressive results with the X-Pro2. We were unable to take images away with us, but unless there’s been any drastic changes to its design of the chip or the way images are handled, we should expect to see more of the same with the X-T2.

The X-T2 is the first Fujifilm X-series camera to shoot 4K video footage, and in an effort to strip back and speed up the whole process, users can use a host of Fujifilm’s Film Simulation modes, doing away for the need to colour grade later in post production.

Offering 100Mbps (compared to 34Mbps on the X-T1), as well as HDMI output, audio volume live monitoring and adjustment and a 3.5mm microphone socket in the body (there’s a 3.5mm headphone terminal in the optional VPBC-XT2 grip), it promises to be Fujifilm’s most advanced camera for video capture yet, though it’s unlikely to tempt Canon, Sony and Panasonic users to make the switch.

To accompany the arrival of the new camera is an all-new VPB-XT2 battery grip, accommodating two batteries (as well as being supplied with a dual charger), it improves the burst performance of the X-T2 from 8fps to 11fps, while Fujifilm claim that with two fully charged batteries, you’ll be good for 1000 shots.

The original X-T1 has been a firm favourite amongst photographers – and it’s easy to see why when you take into account its small form-factor, tactile controls, solid build and lovely results. Despite a huge firmware refresh that saw a host of AF improvements, it was never going to be a camera for those looking to shoot action. With the arrival of the X-T2, it looks like it could change all that. The new AF system promises to be a huge improvement over what we’ve seen before, and while we’re yet to try it out in anger, it’s encouraging to see the efforts Fujifilm’s engineers have gone too over the system before.

Along with the inclusion of the excellent 24.3MP X-Trans CMOS sensor and a host of refinements round the body, and the X-T2 promises to be one of the best cameras we’ve seen all year.