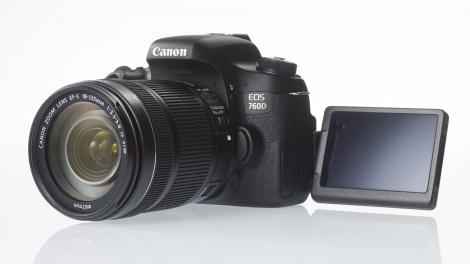 The EOS 750D and 760D are Canon’s two new DSLRs, and they sit at the top of its beginner’s range, ultimately replacing the old EOS 700D, though this model will carry on for the time being.

So why two cameras and not one? Although they share the same basic specifications, the 750D and 760D are aimed at different kinds of users. The 750D is pitched at relative novices, while the 760D has controls and features aimed at more experienced and more ambitious photographers.

Inside, the Canon 750D (Rebel T6i) and 760D (T6s) are essentially the same camera. Both have Canon’s new APS-C format 24.2MP CMOS sensor, a Digic 6 processing engine and the same 19-point autofocus system.

They both use Canon’s new Hybrid CMOS AF III system too, for use when images or video are composed on the screen in Live View mode. Like the 750D, the 760D has Wi-Fi and NFC technology for connecting the camera to a smartphone or tablet for remote control and image sharing.

Even the continuous shooting speed is the same, at 5fps, and the 750D and 760D have the same metering system and a 3-inch articulating 1,040K-dot touch-screen display.

On the outside, though, these cameras have some key differences, and the 760D is clearly designed for more advanced photographers, with a number of features taken from Canon’s high-end cameras.

One handy addition in the 760D is an electronic level that can be displayed on the screen on the back of the camera, or in the viewfinder, to help keep horizons straight. This indicates horizontal tilt, but not up/down tilt, so it’s useful for getting horizons straight, but it won’t help when you’re trying to ensure that the sensor is parallel to a building to avoid converging verticals. Like the Canon 7D Mark II, the 760D’s viewfinder has a dedicated Level icon and it doesn’t use the AF points to display the level – so it can be seen when pressing the shutter release to focus the lens.

The 760D has a different control layout too, though the two cameras feel very similar in the hand as there’s only 0.2mm difference in one dimension between them – the 760D is the slightly taller of the two.

The 760D also has an eye sensor to detect when the camera is held to your eye to take a shot, and automatically turns off the display on the main screen, whereas on the 750D you have to press a switch.

One of the biggest differences between the two cameras is that the 760D has a secondary (monochrome) LCD on the top-plate. This shows useful information such as the ISO (sensitivity) setting, battery level, exposure level, shutter speed and aperture. It’s useful to see the camera settings from above and uses less power than the main screen.

On the 760D, the mode dial is on the left of the top plate not the right, and it has a locking button in the centre. This button needs to be pressed before the mode dial can be rotated. It seems rather fiddly at first, but you get used to using it after a while. Nevertheless, it would be better if you could select to lock the dial or not.

Rather than having a dedicated Wi-Fi indicator on the camera body like the 750D, the 760D displays when the Wi-Fi system is active in the top-plate LCD.

In another major departure from the 750D, the 760D has a dial around the navigation buttons – along with a lock to deactivate it. This allows quick adjustments to exposure in manual exposure mode and exposure compensation in the automatic and semi-automatic exposure modes because there’s no need to press a button while using the main dial.

The dial feels a little lightweight in comparison with the larger dial found on the back of higher-end cameras. It’s also rather low down on the body so it doesn’t fall within the natural reach of your thumb, you have to stretch down to it.

I had the opportunity to try out the Canon 760D at the Canon launch event in London, though Canon is keen to stress that these were pre-production units and the images might not be representative of the final product.

This is Canon’s first new APS-C sensor for some time, and I’m keen to see how its performance compares with the 700D and, indeed, rival Nikon DSLRs using a 24MP APS-C sensor. The camera is currently being put through our lab tests and we hope to be able to post the results very soon.