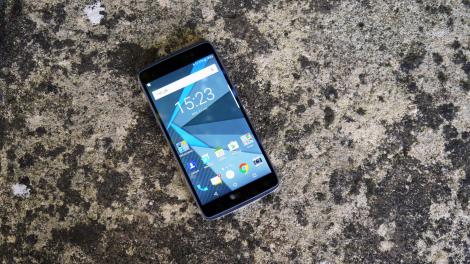 The BlackBerry DTEK50 is the world’s most secure Android smartphone – and that’s not a bad claim to fame. Concerns over personal security on our mobile devices have never been greater, and the DTEK50 looks to play on that insecurity in people’s minds by offering solid specs with enhanced protection.

BlackBerry has fallen away dramatically from the days when its Curve and Bold handsets, with BBM at their hearts, ruled the mobile roost. Over the past four years the Canadian firm has struggled to stay relevant in the ever-evolving smartphone world.

The rather awkward DTEK50 name – which comes from the DTEK security app which comes pre-installed on this handset and its big brother, the BlackBerry Priv – doesn’t do anything for the phone’s street appeal, and creates a decidedly ‘businessy’ tone from the outset.

While BlackBerry has declared the DTEK50 the world’s most secure smartphone, the truth is that it has the same level of protection as the Priv – which means the firm actually has a pair of world-leading secure handsets.

The target market is mainly enterprise, but with a solid-looking spec list and an attractive $299, £275 (around AU$400) price tag, you can’t rule the BlackBerry DTEK50 out of the consumer market.

Those looking for a solid, affordable smartphone with added security could well be in luck – and the demand for this type of device is on the up.

So has BlackBerry stumbled upon a winning formula, or is it another stab in the dark? We got hands-on the world’s most secure Android smartphone to see what all the fuss is about.

The DTEK50 isn’t a flagship device – it slides in under the keyboard-toting Priv in terms of spec and price – but with the removal of the iconic physical keys emerges a handset that will likely appeal to a much wider market.

It’s no secret that BlackBerry hasn’t done anything special in the design department here. The firm has confirmed it used an off-the-shelf reference device from manufacturer TCL, and tweaked the hardware and software to give it the BlackBerry look and feel.

In fact, the DTEK50 is a modified Alcatel Idol 4, and while it may not be the most appealing phone around, this means it can carry a low price tag while still delivering on performance.

Getting back to the design, the DTEK50 features a grippy soft-touch rear, which gives the handset a slightly rugged feel in the hand.

It won’t be winning any awards for cutting-edge design or premium appeal, but the metal frame feels solid, and the manageable 147 x 72.5 x 7.4mm dimensions enable it to nestle nicely into the palm.

This is the thinnest BlackBerry ever, so if pocket bulge is a concern the DTEK50 shouldn’t worry you, and at 135g it’s also surprisingly light.

The power/lock key resides on the left of the handset, while the volume rocker on the right is joined by a centralized round button, which BlackBerry calls the ‘action key’. It’s reminiscent of Sony’s power/lock key on its Xperia devices, and at first it’s a little confusing, as it looks to be the more obvious power option.

In fact, this is a programmable button that enables you to access an oft-used app, task or function of your choosing.

If you find yourself constantly firing up Instagram to check your follower count, or forever diving into your email inbox, the action key provides a useful way of quickly accessing these.

During my brief time with the DTEK50, though, I found myself reaching for the button a number of times when attempting to wake/lock the screen, which was a little annoying.

Up front the 5.2-inch full HD screen is bright and clear, and considering the price tag of the DTEK50 it looks to be a very good offering. It’s not quite as colorful as AMOLED panels, with hues looking a little more muted, but there’s very little to complain about here.

A solid design and decent display aren’t all the DTEK50 has up its sleeve. There’s also a Snapdragon 617 octa-core processor, 3GB of RAM, 16GB of internal storage, a 13MP rear camera, a 8MP front snapper (with selfie flash!), a 2610mAh battery and a microSD slot.

The expandable memory slot supports cards up to 2TB in size, and this additional space can be adopted by the Android operating system, so the DTEK50 will treat it as internal storage; this makes your card work more seamlessly with the phone, and reduces storage headaches.

That’s quite the rap sheet for a sub-$300/£300 smartphone, and finally puts an end to BlackBerry’s recent track record of offering outdated, underpowered specs at an inflated price (we’re looking at you, Z10, Z30 and Passport).

So does it perform? Our early findings suggest that yes, it does. Navigation is smooth, and load times in general seem to be quick. We’ve not yet had a chance to put the DTEK50 through highly demanding tasks, but the signs are positive.

On screen you’ll find the latest version of Google’s mobile platform, Android Marshmallow, and BlackBerry has done very little to mess with the experience.

At its core this is still stock Android, although a fleet of BlackBerry apps come pre-installed, including the excellent BlackBerry Hub, which pulls all your messages and notifications into one handy application.

BlackBerry has also added the Productivity Edge, which is accessed by swiping in from the right of the display. This gives you quick access to emails, contacts, calendar entries and tasks, and reduces the amount of app-hopping required to reach key information.

The keyboard is another area where BlackBerry has added its own touch – and it claims it has a class-leading offering. While that’s very much up for debate, the good news is if you don’t like it you can grab an alternative from the Play Store in next to no time.

It’s the security aspects which will really be grabbing many people’s attention though. As well as baking in its own security protocols from the chip level up, BlackBerry’s new smartphone comes with the DTEK app.

This makes security simple for everyone, as it clearly shows you how secure your phone is, and provides tips on how to improve the rating.

There are granular controls for every application too. If you don’t like the fact that the flashlight app you just downloaded accesses the microphone every time you use it, you can revoke that particular access. It’s easy to use, while also being a powerful tool.

The BlackBerry DTEK50 is a surprisingly promising smartphone, with a more than reasonable price tag and a spec sheet to be proud of.

It’s not going to wow you with its design, or blow you away with flagship features, but what you do get is a phone which fully encrypts all your data, makes it easy for you to monitor your privacy, and ensures everything is secure.

We’re looking forward to putting the DTEK50 through our in-depth review process – and we hope it can live up to this promising start.