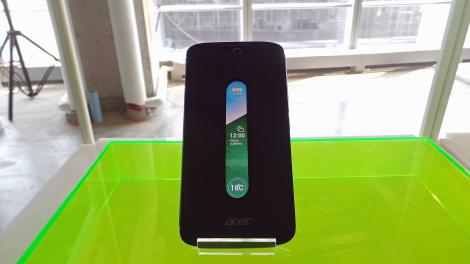 Three days. That’s how long Acer claims its new Liquid Zest Plus smartphone can last you, although realistically, you’re probably looking at closer to two with normal usage. Nonetheless, by 2016’s standards, it’s not something to turn your nose up at.

To make the magic happen, Acer has placed inside a 5,000mAh battery. For context, the Samsung Galaxy S7 Edge packs in a 3,600 mAh battery. Acer’s phone also has the benefit of quick charging, the result of which should require a lot less time juicing up.

The phone itself is nice; nothing incredibly beautiful, but it shows that Acer is giving more love to design than before. It’s a mid-tier phone in 2016, one that stocks a decent looking 5.5-inch IPS screen, 2GB of RAM and Android 6.0 Marshmallow onboard.

Acer also talked a lot about the 13-megapixel camera, which it’s particularly proud of. The camera uses a holy tech trinity of laser focus, face detection and contract detection autofocus to spruce up photos.

I found the contrast detection to be the most notable effect, and overall it’s a good camera, although I’d need to take it off the show floor to see how well it really fares. The phone also has HD DTS audio, so you’ll get solid sound from those speakers.

That stuff is nice, but my favorite feature of the phone is the optional front cover, which can be added or removed by swapping the rear casing of the phone. The cover has a long, ovular space in which certain notifications and controls will appear.

It’s not a new concept by any stretch, but it’s clever and looks really nice on the Zest Plus. I could change my music, adjust the volume, see a weather forecast, and get calendar updates – all of which looked vibrant on the front of the phone. You can also read messages, although given the lack of space to read them in, you’ll probably just open the case anyway.

I’ve been picking up various Acer phones over the years, but this is the first time I’d really be happy to use one on a regular basis. It looks good and its battery life seems to be fantastic, but its mid-range specs mean that it’s not the zippiest of phones out there. The so-so IPS display holds it down a bit, too.

We’ve not yet got a price for the Liquid Zest Plus, or any confirmation of where it might launch. Expect to see it popping up this year though.

While this one’s clearly all about the battery, the Zest Plus is a good looking phone, too. Its mid-tier specs bring it down from flagship status, but if you’re looking in that part of the market and find battery life to be your biggest bugbear, this could be a good choice. If it ever comes to your country, that is.