The GoPro Hero is the company’s latest entry-level action camera, and while it may have gone on a bit of diet as far as features goes, to the extend of dropping 4K video capture, there’s lots to like about this budget cam.

[Update: the GoPro Hero has recently been replaced by the new Hero7 White. The exterior design is virtually unchanged, while there’s the same 2.0-inch touchscreen and 10m waterproofness. Like the Hero (2018), the Hero7 White doesn’t feature 4K video capture, but image stabilization is said to be improved. The newer model costs the same as the model it replaces, so while we’re yet to test the Hero7 White, on paper at least, it looks like the better buy.]

For a start, it borrows the same form factor and design as the pricer Hero5 Black and Hero6 Black. This is a change in approach from GoPro’s last budget action camera, the Hero5 Session, with the cube design foregoing a rear display. This meant any essential framing had to be done via your smartphone and the dedicated QuikStories app, which was a bit of a faff, so it’s nice to see a 2.0-inch touchscreen on the rear of the Hero. The screen is pretty easy to use considering its size, but because it uses the same interface as more feature-rich models some menus can look a bit odd when there’s only one setting to select. There’s also voice control, which is an option for most of the key settings you’re likely to need when out with your Hero, while there’s built-in image stabilization to help keep footage steady.

That fact that the Hero has the same design as GoPro’s premium models also means it’s waterproof down to a very useful depth of 33ft/10m without the need for an additional case. The Hero comes with a decent plastic frame, which allows you to attach a wealth of accessories depending on where you’re intending to take the camera.

If you can get over the fact that it doesn’t offer 4K (a feature the Hero5 Session supported), you’ll be pleased with the smooth Full HD 1080p footage that the Hero is capable of recording. With settings kept to a minimum (there’s a choice of either 60 or 30fps) and the GoPro Hero taking care of exposure and white balance, things are kept nice and simple – just frame your shot and hit record (or if you’re using voice control, tell it to start recording). There’s also the option to capture 10MP still images, though these appear a little over-processed for our taste. Footage and photos can easily be transferred to your smart device via the polished QuikStories app, which also offers camera control and editing features.

While the limited set of video features may seem a bit of a black mark against the Hero, they really aren’t. Yes, if you want 4K capture at multiple frame rates and advanced exposure control, plus a host of other clever features, you’ll want the GoPro Hero6 Black; however, if you just want a dependable and easy-to-use action camera that’s fun to use, the Hero will do you just fine.

If you’ve been eyeing up a GoPro for some time, but haven’t been able to justify the price, the Hero could be the answer. This is a great camera for the novice or casual user who just wants to capture the action without worrying about which frame rate or resolution they should be using. There are better specified-action cameras out there for a similar price, including ones that offer 4K video, but they don’t have the refined design and polished control of the Hero.

Stripped down, but still very capable

As this is GoPro’s budget-focused action cam there’s no 4K video capture on the Hero. You get the option to shoot at either Full HD 1080p, or at a slightly higher resolution of 1440p, although this does force the camera to shoot in a not very video-friendly 4:3 aspect ratio.

While GoPro’s pricier models, and some rival cameras from other manufacturers, offer a wide range of frame rates and resolutions, the Hero keeps things simple, with only 30fps or 60fps on offer, and it can’t shoot higher frame rates at lower resolutions.

The Hero doesn’t get the Hero6 Black’s GP1 processor, but there is image stabilization on board to help keep footage steady. It can capture 10MP JPEG images as well as video, though unlike on the premium GoPro models there’s no raw file support. The Hero can shoot a burst of 10 files in succession – more than enough for most people, though not a match for the Hero6 Black’s 30fps – and there’s also a timelapse mode, although you’re restricted to 0.5-second intervals where you get multiple options on the higher-end models.

Just like the Hero5 and Hero6 Black the Hero gets a 2.0-inch touchscreen, something that was missing from the Hero5 Session, along with GoPro’s handy voice control feature. There are 12 simple voice commands, covering pretty much everything you’re likely to want to do with the camera, but you don’t get the Wake On Voice function that we saw with the Hero6 Black. Finally, the Hero uses the same 1220mAh battery with USB-C charging that we’ve seen before.

Same design as its pricier siblings

GoPro has opted to stick with the same design for the Hero as for its pricier siblings, the Hero5 Black and Hero6 Black, which is great to see as the two high-end models are perhaps the best designed and finished action cameras on the market. The Hero has an understated smooth dark gray finish and feels extremely well made, which isn’t something you can say about some similarly priced cameras. The Hero is also waterproof (down to 33ft or 10m) without the need for a housing, which means there’s nothing to get in the way of the built-in microphone, making audio quality that bit better. Should you want to take your Hero deeper underwater there’s an optional Super Suit housing that offers protection down to 196ft or 60m.

The Hero comes bundled with a sturdy plastic frame which is a world away from some of the cheap Chinese rivals out there in terms of quality; the fit is nice and snug, and it’s compatible with a huge range of GoPro-compatible camera mounts.

You could be forgiven for thinking that the small 2-inch touchscreen at the rear of the Hero would be awkward to use, but it really isn’t that bad. The screen is responsive, with only light swipes and taps required, while the interface is fairly straightforward. That said, because in some instances settings are limited to a single option, it can look a little odd when you click on it, as looks like it’s stuck on that setting, as opposed to the higher spec’d models, where you’d toggle through the options. 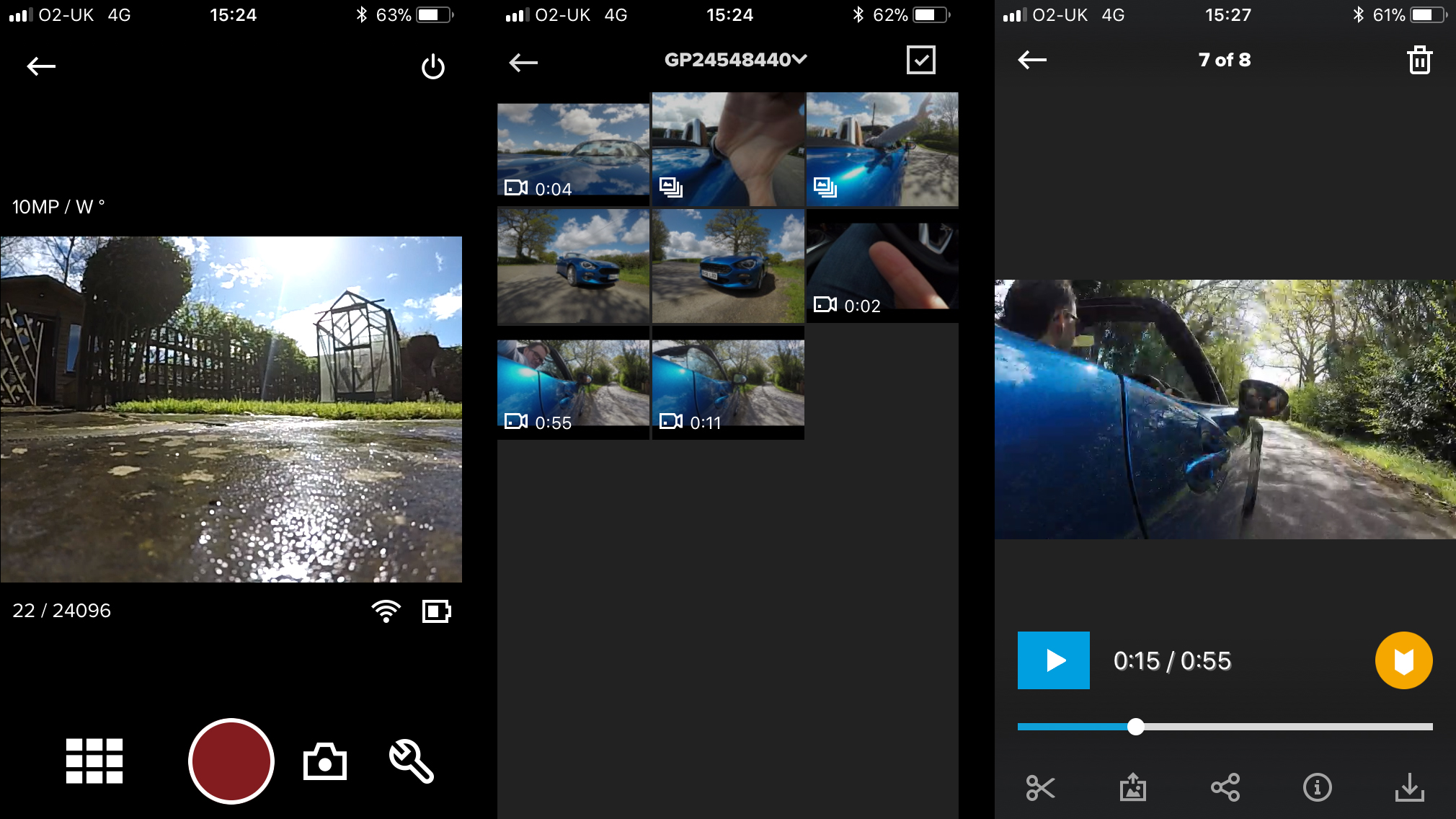 You can transfer images from the microSD card to a computer, while GoPro’s QuikStories app enables you to upload images when you’re on the move. As well as transferring videos and images via Wi-Fi, the app can be used to adjust all the Hero’s settings and hosts an almost-instant live feed, allowing you to position the GoPro Hero remotely and hit record should you wish. You can choose to share shots without editing, but QuikStories can automatically turn footage into a video collage, adding transitions and even music, and the videos are fully editable if you want to make changes.

Shoot in Full HD 1080p and you should get about two hours of battery life from the GoPro Hero at 60fps, while this can be stretched to two and a half hours if you reduce the frame rate to 30fps – good going for an action camera.

While the absence of 4K might seem to put the Hero at a disadvantage compared to some rivals, the quality of its Full HD 1080p footage is very good. We reckon you’d be hard-pushed to notice the difference between it and 4K on a smartphone or tablet screen, with footage appearing nice and smooth when replayed, although if you’re going to be regularly replaying footage on a larger monitor or TV screen you may be want to look for a 4K action camera that offers greater clarity and sharpness.

Colors look good, the built-in image stabilization works well (within reason), and the exposure seems pretty dependable. That said, GoPro has dropped its ProTune options from the Hero, so you don’t get the advanced control over exposure, color, white balance and sharpness that you do on other GoPros.

The Hero shoots 10MP JPEG stills, although it probably isn’t going to trouble your smartphone or compact camera for image quality. The ultra-wide angle of the lens means it’s not suited to a lot of subjects (although it’s perfect for selfies), while a little too much noise-reduction processing is applied to images, which means detail is compromised. 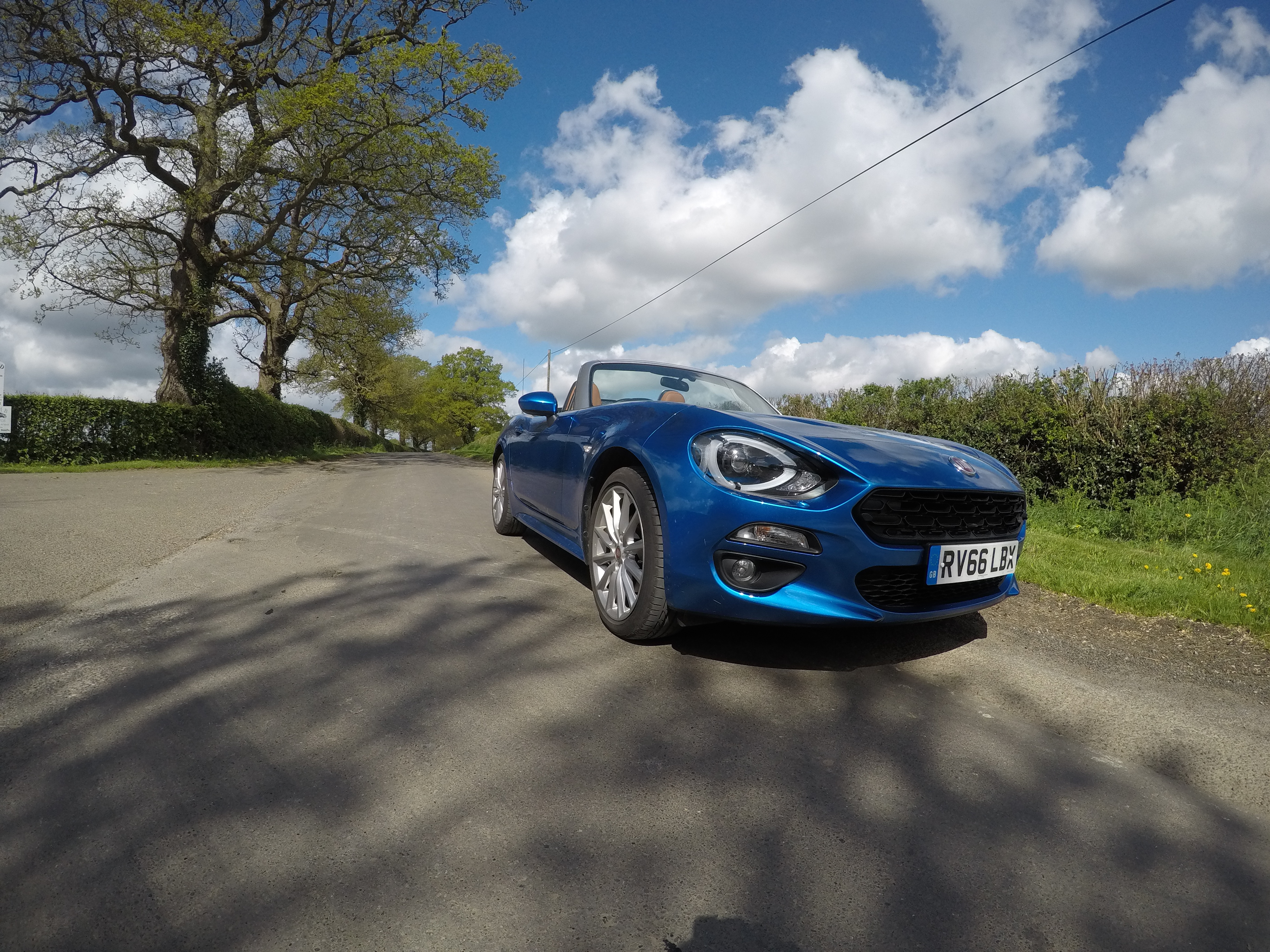 If the GoPro Hero isn’t for you, here are three excellent alternatives to consider…