Despite their huge dominance in the DSLR market alongside Nikon, Canon has struggled to do the same with mirrorless cameras. The EOS M was underwhelming to say the least, with poor AF, while the EOS M3 and M10 haven’t really progressed the range that much.

The arrival of the M5 could shake things up a bit though. Sitting at the top of their (small) mirrorless range, the M5 is designed to appeal to experienced users, with Canon hoping it will appeal to existing higher-end EOS DSLR users looking for a more portable alternative to their DSLR.

The EOS M5 sports an all-new 24.2MP APS-C CMOS sensor, and while Canon wouldn’t confirm whether it featured the same on-chip digital-to-analogue conversion as we’ve seen on recent sensors from Canon – both the EOS Mark IV and EOS 80D feature this technology for improved noise control and better dynamic range, Canon did say it uses the same generation of sensor technology, so hopefully this will be the case.

With the latest DIGIC 7 image processor doing all the hard work, the EOS M5 is capable of shooting at a burst rate of 7fps – with full AF functionality and metering, and it can sustain this for up to (approximately) 31 JPEG files, before dropping in speed to 4fps, continuing at this rate until the card is full up. Should you want to shoot faster than this, 9fps is possible, but focusing and metering will be locked once the shutter has been fired. 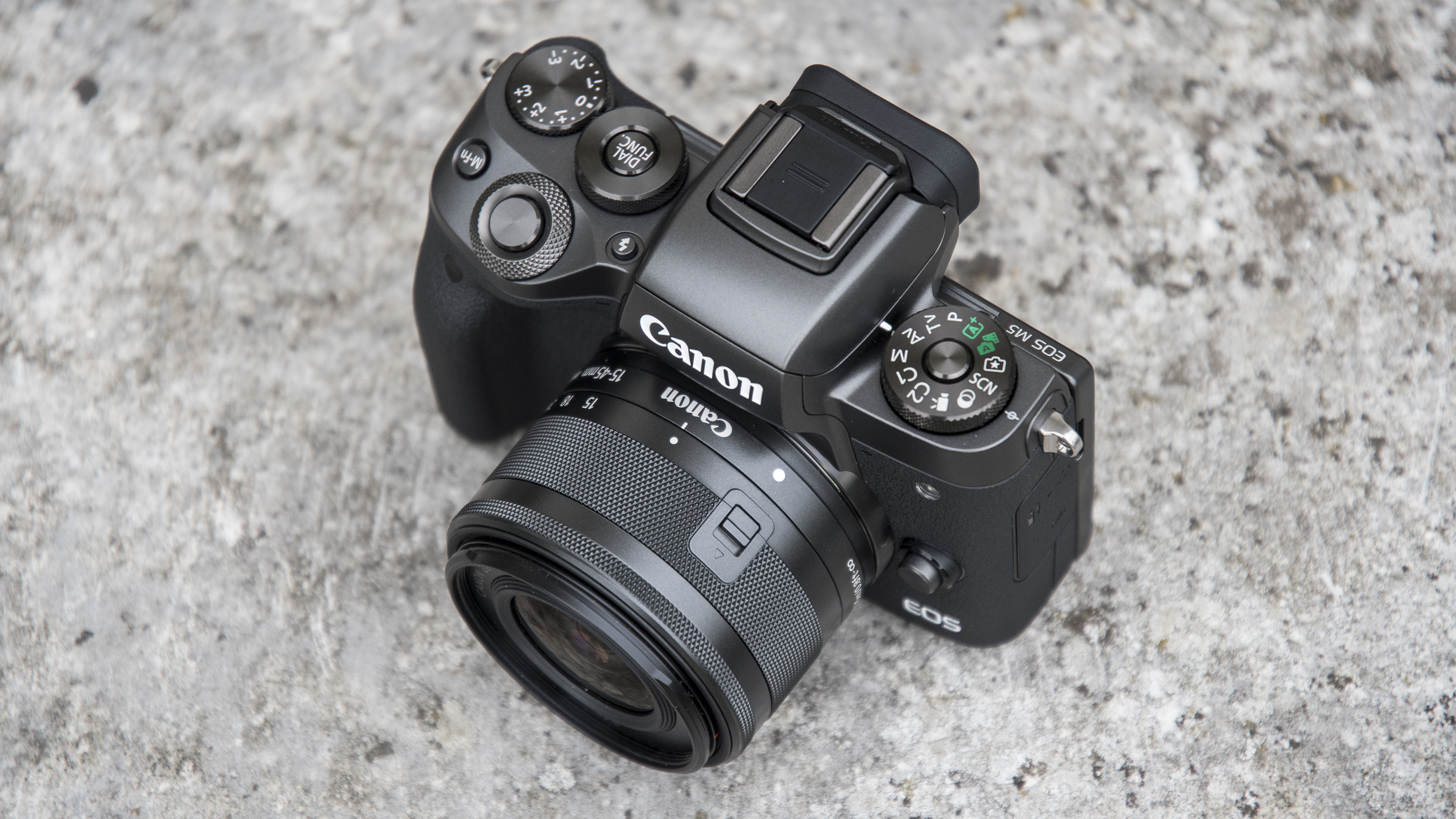 In a first for Canon’s mirrorless range, the EOS M5 incorporates a built-in electronic viewfinder with a 2.36-million dot resolution and fast 120fps refresh rate – in the time we had with the M5, the clarity and brightness appeared to be very good, while it was great to see that Canon has continued with it’s implementation of touchscreen technology on the rear display. The large 3.2-inch tilt-angle display (upwards approx 85 degrees, downwards 180 degrees) features the same impressive 1,620,000 dots as we’ve seen used by both the 5D Mark IV and 1D X Mark II. 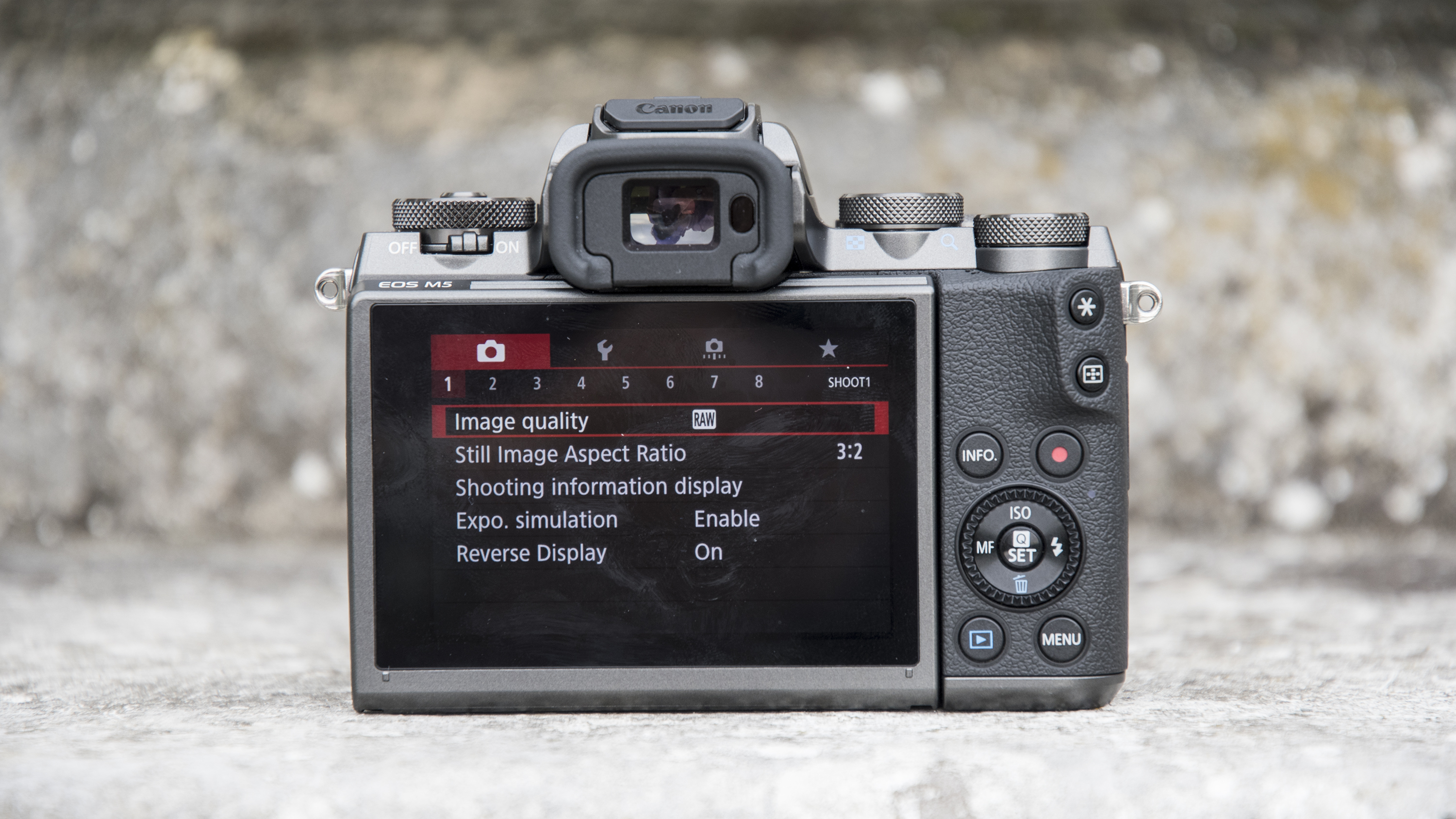 The EOS M5 is Canon’s most connected camera we’ve seen, with not only Wi-Fi and NFC, but also the addition of Bluetooth as well. This allows a low power, constant connection to be made between camera and smart device for what promises to be easy transfer of images between the two.

Perhaps a little surprising with the recent arrival of 4K video on the 5D Mark IV, the EOS M5 sticks with 1080p video, though it’s possible to shoot at up to 60p.

The EOS M5 looks like a mini DSLR, taking styling cues from both the EOS DSLR and mirrorless ranges, with the subtle two-tone finish works well – with the metallic grey matching that of the lenses.

The chassis is constructed from strong polycarbonate, not metal, and weighs in at 427g body-only with battery and card. In the hand, and the modest grip is nice and comfy, with Canon’s pleasing textured rubber coating enhances the feel. 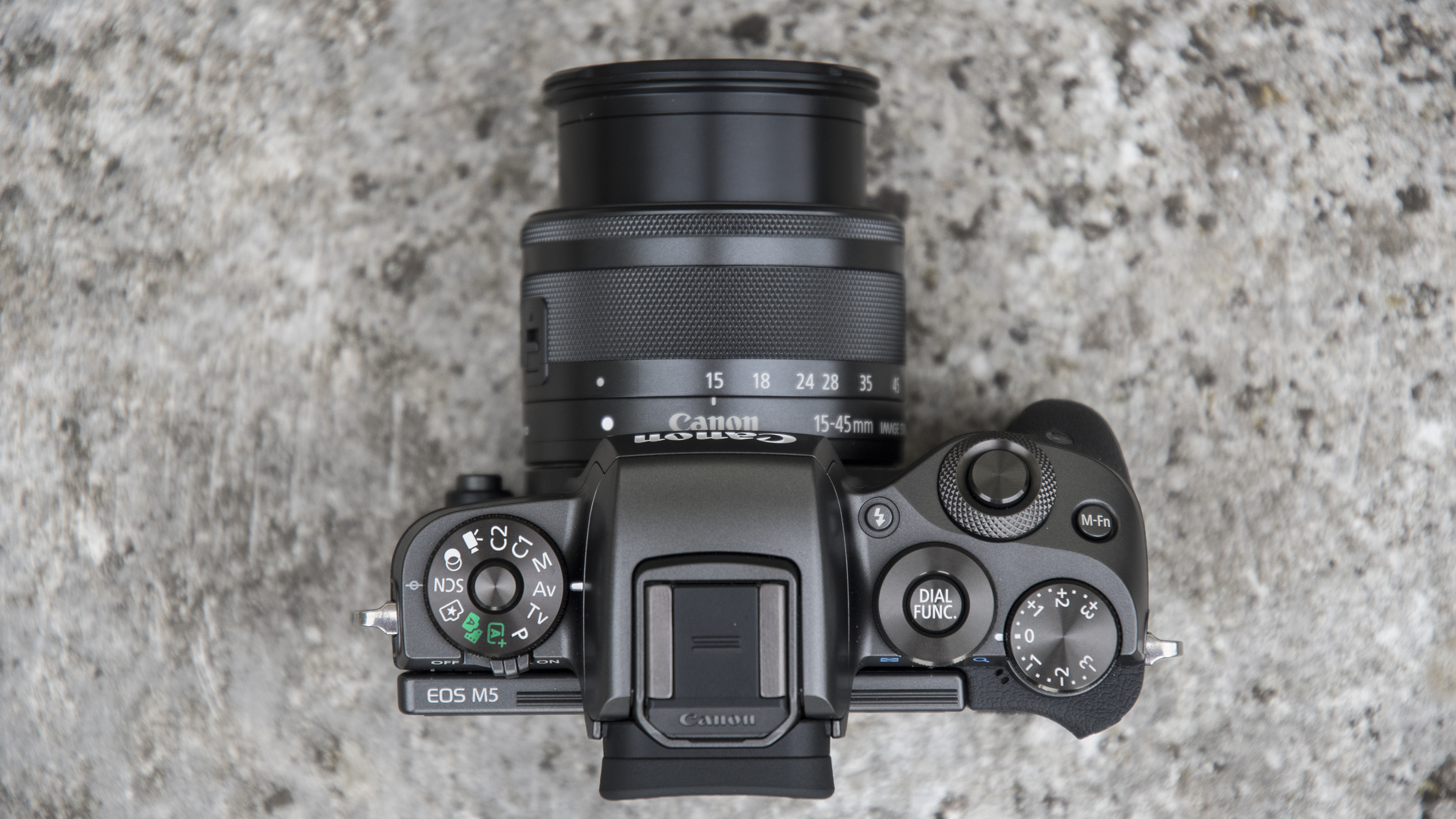 As we’ve seen on other EOS mirrorless cameras, the shutter button also features a front command dial wrapped round it, while there’s an exposure compensation dial at the rear (similar to that seen on the likes of the Fuji X-T2). What’s new though is the addition of a Dial Func. button – whereas higher-end EOS DSLRs have four buttons running along the top of the LCD display for numerous key camera settings, this new interface allows you to toggle through these settings (displayed in the viewfinder or screen) before adjusting the desired setting on the dial, and we have to say it works very well. 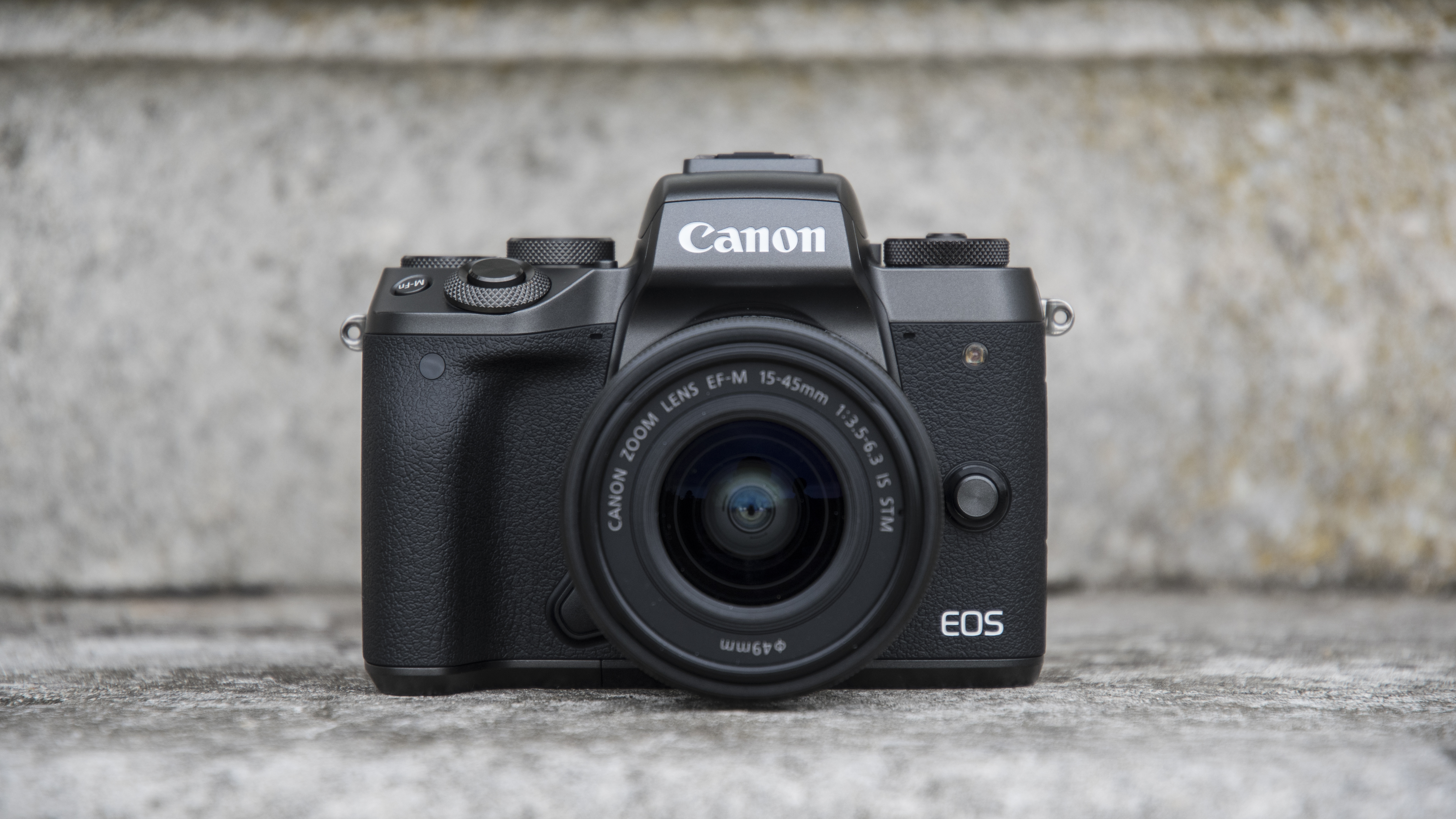 With a coverage of 80% of the image area, the EOS M5’s focusing is nice and quick in the time we had to use it – a huge jump from the original EOS M, while the ability to touch and drag the AF point with your thumb on the rear display while you have the camera raised to your eye makes quick AF area selection very straightforward. You don’t have to swipe across the whole screen either – you can set this to half or a quarter of the display in the menu should you wish.

Some may feel the absence of 4K is a bit of an oversight – especially now that many rivals are including this as a standard setting, while the limited range of EF-M lenses could be restricting. Granted, you’ve got Canon’s huge range of EF and EF-S lenses available via an adapter, but with the likes of Micro Four Thirds and Fuji offering a growing selection of dedicated lenses, the fairly entry-level range of EF-M lenses looks quite weak by comparison and out of sorts with the high-end credentials of the EOS M5. 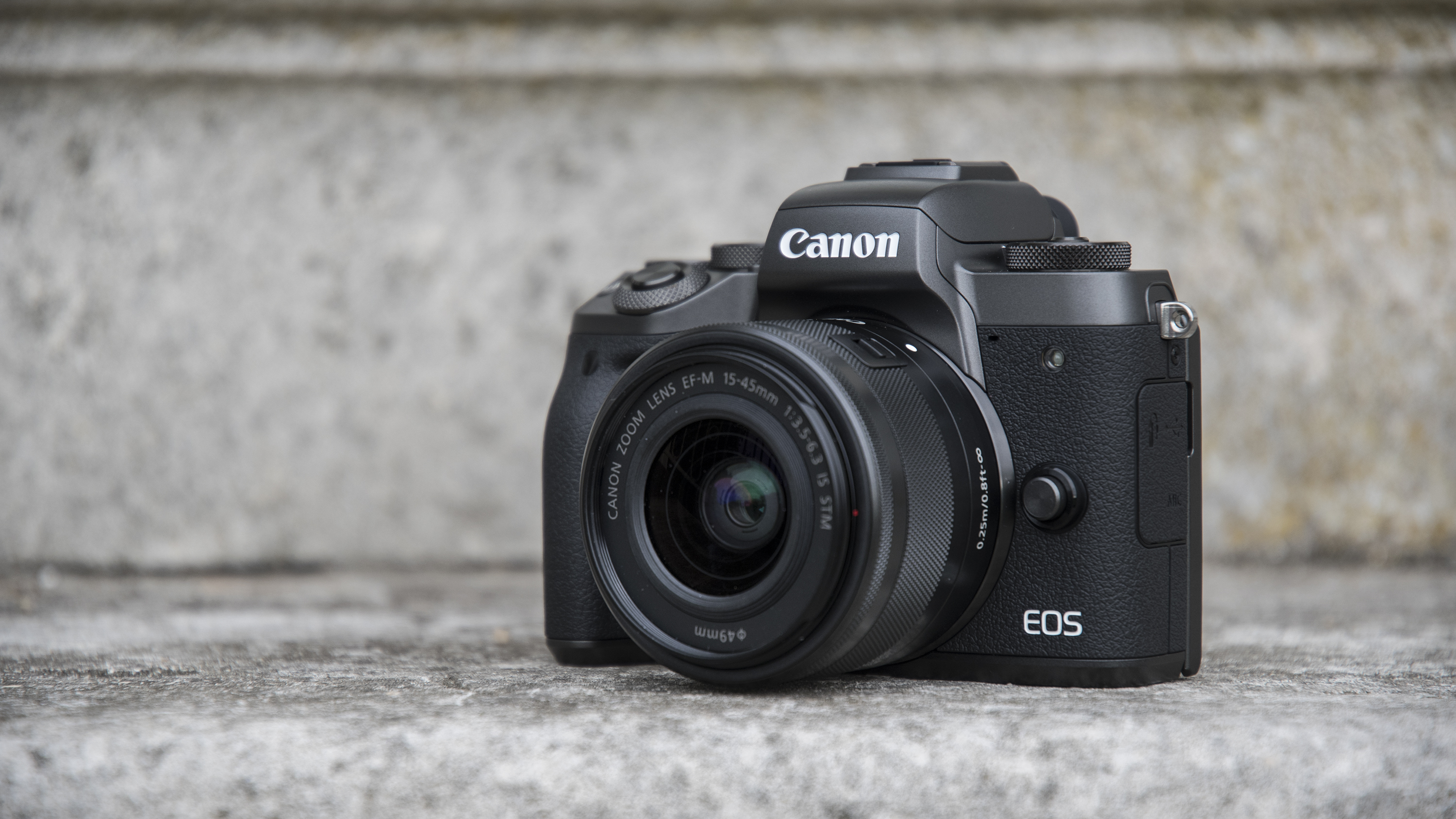 Those issues aside, the EOS M5 looks like Canon might have finally come good with a mirrorless camera. With the arrival of Dual Pixel CMOS AF, autofocus appears to be a huge improvement over previous models. Factor in the inclusion of a built-in EVF and touchscreen interface, along with a well thought out set of controls, and the EOS M5 looks like it could be a good option for experienced users. Whether that’s enough now that other brands have established themselves in the mirrorless camera sector remains to be seen.