Coffee Lake Refresh bridges the gap between itself and AMD Ryzen 2nd Generation – at least until Ryzen 3rd Generation hits the street later this year. We’ll see how successful it is once we’ve finished testing all the different chips, but just judging by our time with the Intel Core i9-9900K, Intel has succeeded. With Intel’s first mainstream, 8-core, 16-thread processors for consumers, Coffee Lake Refresh changes the game.

Now, these are just the highlights, but there is so much more Coffee Lake Refresh information out there, so strap in for the long ride and we’ll tell you everything there is to know about the latest from Intel. 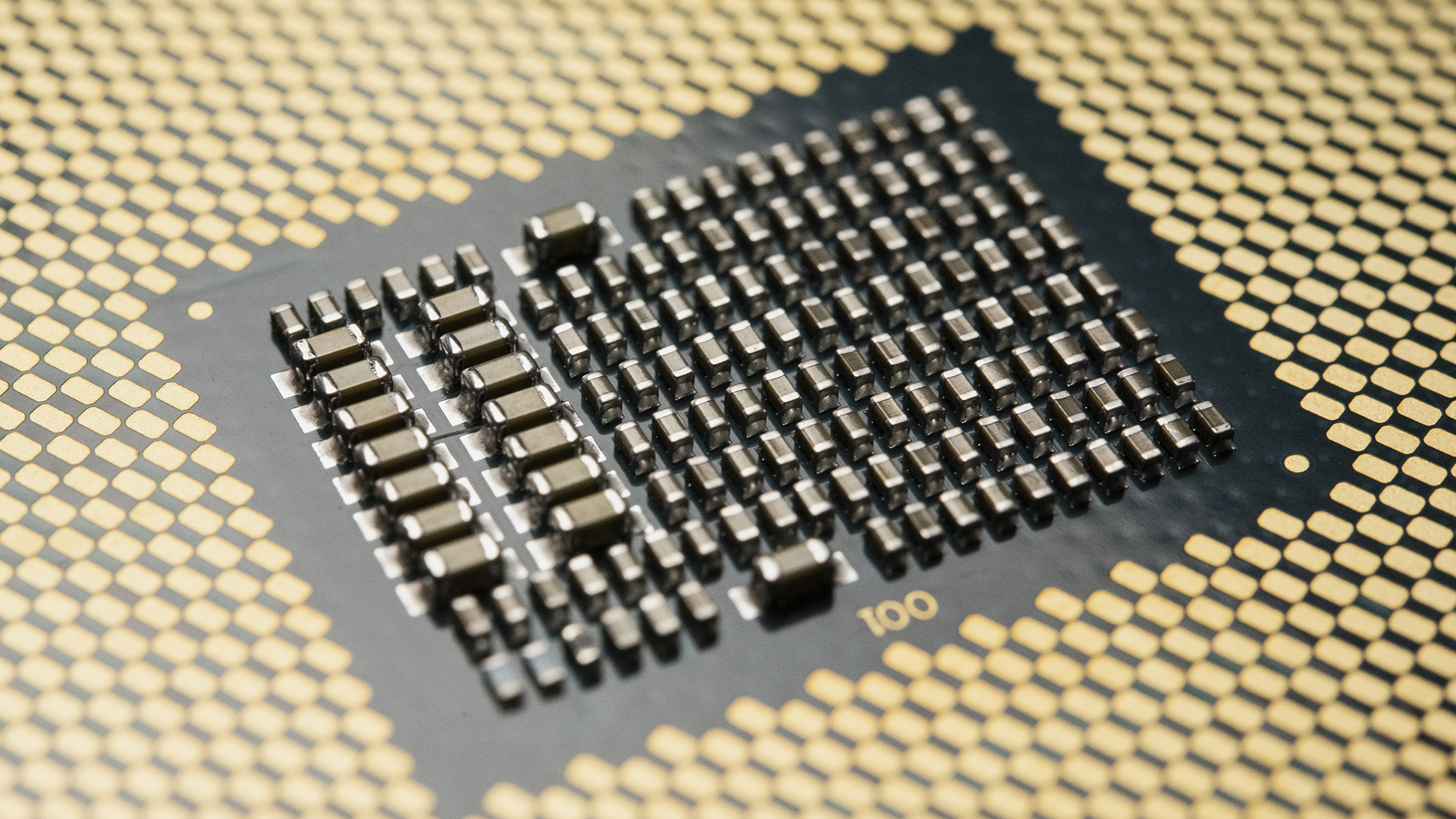 At its 2018 Desktop Launch Event, Intel finally revealed when we can get our hands on its 9th Generation desktop lineup. The good news is that all the speculation was pretty much spot on – preorders are live now, and the chips will start shipping out on October 19.

However, we’ve only seen the announcement of there of the Coffee Lake Refresh processors – the Core i9-9900K, Core i7-9700K and Core i5-9600K. We’re sure that the lineup won’t end here, so keep this page bookmarked, as we’ll update it when new processors get announced.

And, at CES 2019, Intel announced a few new processors along with variants of existing CPUs without integrated graphics to flesh out its Coffee Lake Refresh lineup, and to better compete with lower-end Ryzen chips – without lowering the prices.

Now that Intel has announced its new desktop platform, we now know what the pricing is going to look like. For the most part, it falls in line with what Intel charged for Coffee Lake desktop chips, though the Intel Core i9 is much more expensive than the competition, namely the AMD Ryzen 7 2700X. But, at least Intel is giving users the choice to get processors without integrated graphics for the same price. The prices are as follows:

We’re sure that Intel is going to pad this lineup with other mid-range and entry-level processors over the next year or so to pad out these massive price gaps. Until then, though, we can still expect fantastic multi-core performance at a reasonable price. 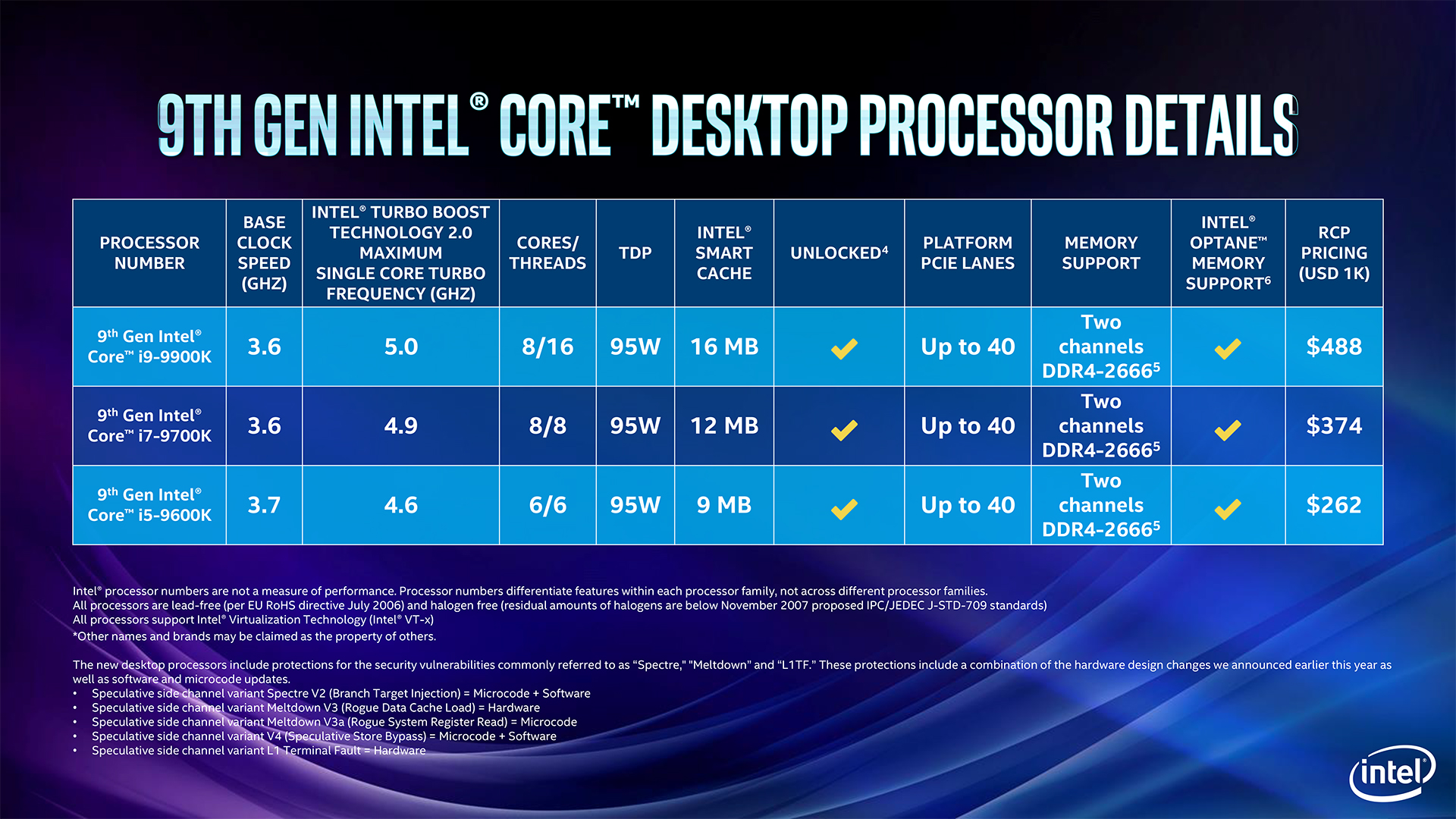 This initial lineup is noteworthy, as it marks the first Intel Core i7 chip in a while without hyperthreading – instead it just features eight single-threaded cores. Still, that should be plenty, especially considering the impressive 4.9GHz boost clock. Luckily, there is still a 9th-generation consumer chip that retains hyperthreading in the Intel Core i9-9900K.

Intel might be pushing these core counts even higher, too. A recent forum post suggests that Intel might be pushing out deca-core ‘Comet Lake’ processors, based on the same 14nm process as Coffee Lake Refresh. This is a pretty thin rumor, but, it could see an even bigger performance boost over the Ryzen 7 2700X.

These new processors also feature much improved thermal performance, thanks to soldered thermal interface material (STIM). This should help these processors overclock more efficiently without having to resort to exotic cooling solutions to stretch the performance out.

This is big, because Intel has stuck with non-soldered thermal paste to transfer heat between the processor dies and the IHS – much to the chagrin of enthusiasts and overclockers. This new soldered material should be a much more efficient heat transfer medium, which Intel says will lead to easier overclocking.

One more thing – an Intel Core i9-9900T leak showed up on Yahoo Auctions. It seems to be a 35W version of the Intel Core i9-9900K with the same amount of cores and threads, but with a severely cut down clock speed. This part hasn’t been announced by Intel, so we would take it with a grain of salt – but this wouldn’t be the first time Intel launched low-power T-series chips for prebuilt computers.

Of course, it wouldn’t be a new Intel processor lineup with a new motherboard and chipset platform. Interestingly enough, Intel’s forthcoming Z390 chipset is on the way, and can finally be preordered, after months and months of speculation.

This new platform supports t onboard 802.11ac Wi-Fi, and USB 3.1 Gen 2 – both of which are features not found natively supported on the current Z370 chipset. This new chipset now supports up to 40 lanes of PCIe Express 3.0, but is still limited to dual-channel, 2,666MHz memory. 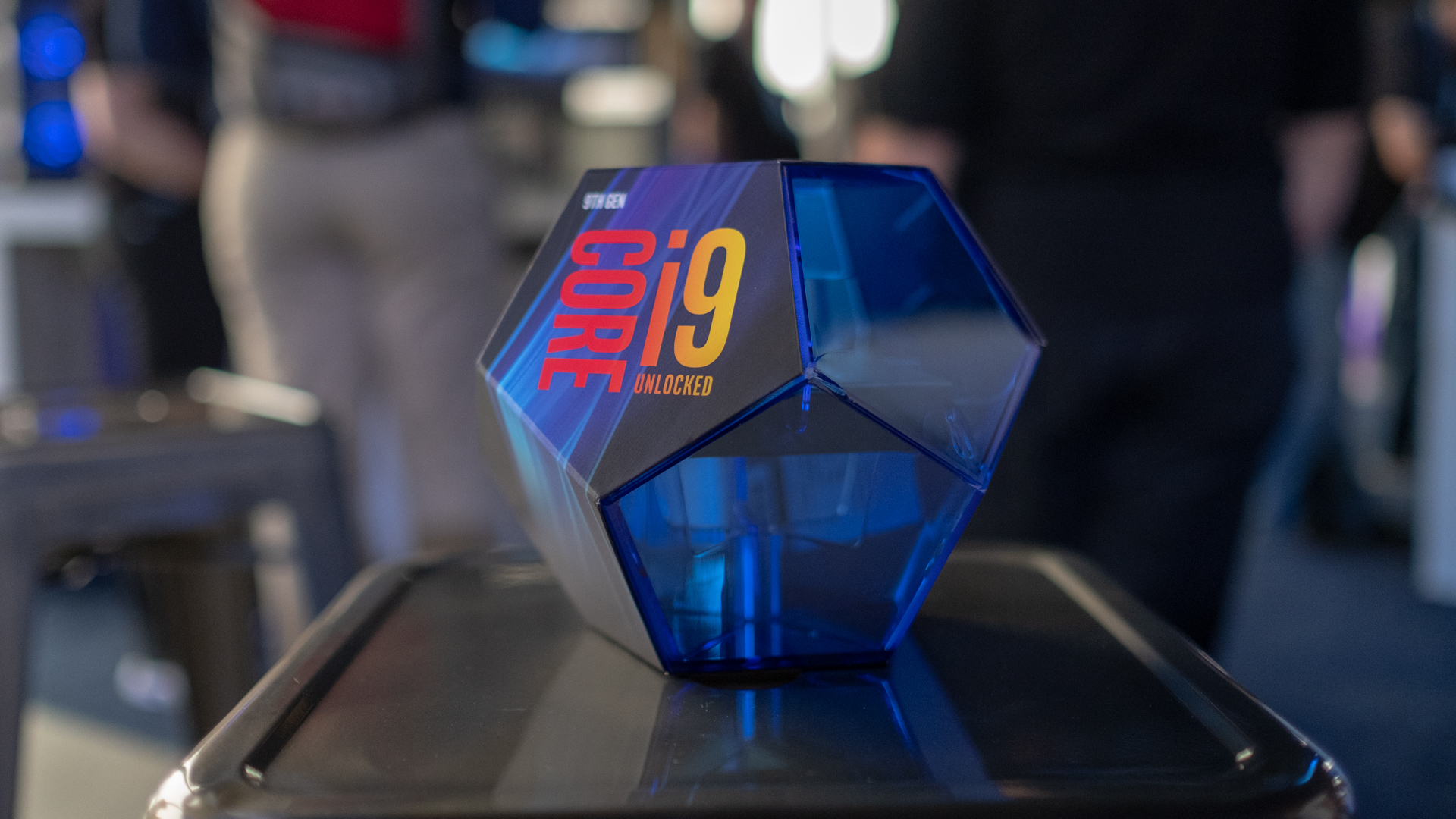 We have finally fully reviewed and tested Intel Core i9-9900K and it is, without a doubt, the fastest consumer processor on the market right now. Intel’s high end chip absolutely dominated everything else in both single core and multi core performance, scoring a ridiculous 33,173 multi-core score in GeekBench 4 – compared to the Ryzen 7 2700X’s 26,011 – it even destroys AMD’s HEDT Threadripper chips in many everyday situations.

However, be careful of the inflated price you’re paying for this higher performance. WE haven’t tested either the Intel Core i7-9700K or the i5-9600K yet, but those reviews are on the way. Until then, though, we have some preliminary results from Intel, but take these with a grain of salt.

Back at Intel’s reveal event for Coffee Lake Refresh, we were able to test the new processors in gaming specific workloads, where the Intel Core i7-9700K was able to hit 30,339 points in a World of Tanks benchmark – compared to the Intel Core i9-9900K’s 33,108 in the same test at the same event.

Meanwhile, the Intel Core i7-9700K was able to hit 30,339 points in that same World of Tanks benchmark – which is impressive given that chip doesn’t feature multithreading.

That’s all we got right now. There’s surely a ton of information to come – so, per our usual advice, we encourage you to keep this page bookmarked, as we’ll keep it updated with in-depth coverage of the latest Intel Coffee Lake Refresh news, information and reviews.