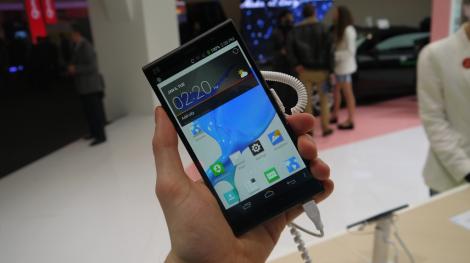 The original Grand Memo arrived at last year’s MWC, so it makes perfect sense that ZTE is rebooting its phablet one year on with the Grand Memo 2 LTE.

The Grand Memo 2 builds on its predecessor, growing its screen from 5.7 to a full 6-inches, putting it on par with the Lumia 1520 and above the Samsung Galaxy Note 3 and HTC One Max.

The 6.44-inch Sony Xperia Z Ultra still rules the roost in terms of size though.

A big phone needs big power and ZTE has equipped the Grand Memo 2 relatively well, but the 1.2GHz quad-core processor is a little disappointing.

You also get 2GB of RAM, 16GB of internal storage, microSD slot and a sizable 3200mAh battery ZTE claims will last for 15 days in standby.

Battery life may actually be alright on the Grand Memo 2 as it’s not rocking a full HD display. Instead you’ve got to make do with a 1280 x 720 resolution, which doesn’t look particularly amazing stretched over such a large area.

The handset itself doesn’t ooze premium quality either, with a cheap plastic finish highlighting the Grand Memo 2 may well be one of the more affordable big screen phones around.

At first look the Grand Memo 2 does appear to be a relatively premium device, but pick it up and you’ll notice the overly plastic body and buttons that rattle inside the chassis.

This does mean that the Grand Memo 2 is surprisingly light, making it slightly easier to hold in one hand, although I still had to stretch my fingers across the device.

For the most part I’d recommend a two handed grip on the Memo 2, just to be on the safe side.

There’s good news in the fact ZTE has loaded Android 4.4.2 KitKat onto the Grand Memo 2, but it’s then gone a spoiled it by putting its own custom overlay on it.

Oversized, childish icons make the on screen experience of the ZTE Grand Memo 2 feel immature and toy-like, and to be honest I found it a little off putting.

The processor appears to struggle a little bit too, as general navigation around the handset was slightly stilted and the Grand Memo 2 isn’t as quick as its big screen rivals.

As you may have guessed from the name the Grand Memo 2 LTE is blessed with 4G connectivity, which should give you a very fast data connection for fluid web browsing.

Unfortunately I was unable to put the 4G performance to the test during my time with the handset.

You can use the Grand Memo 2 as an universal remote thanks to the inbuilt IR (infra-red) blaster, giving you control over your TV, Blu-ray player, Hi-Fi system and more.

The Grand Memo 2 also comes equipped with a couple of decent cameras – a 13MP offering on the rear and a beefed up 5MP snapper on the front.

In general the camera app doesn’t provide a huge array of options, but something I’ve not seen before is a spirit level mode which helps you get a dead straight photo instead of a wonky mess.

This feature won’t be a must have for anyone, but it’s interesting to see and I wonder if it will lead to more enhanced settings in the future.

If you’re in the market for a top of the range phablet the ZTE Grand Memo 2 LTE is not for you.

Its cheap build, average screen and childish UI pigeon hole it as an affordable phablet, but even then you might want to consider a standard size smartphone over this ZTE offering.