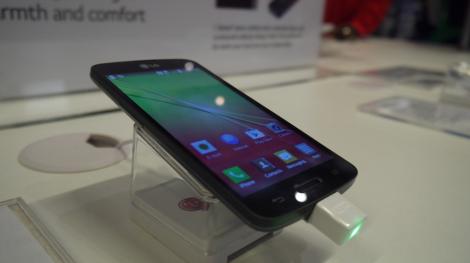 The LG F70 is the Korean firm’s first push into producing more affordable 4G handsets, something which many manufacturers are doing at MWC 2014.

LG hasn’t announced the price of the F70, but the handset is confirmed to arrive in Europe in the coming months.

In terms of design the LG F70 takes cues from the flagship G2, although LG has decided against on screen navigation keys, instead choosing to stick a physical home button below the display, flanked by touch sensitive back and menu options.

The power/lock button is located on the right of the F70, while the volume switch is on the left and both are easy to hit.

The lightweight, plastic build of the F70 feels sturdy, although the rear cover offers little in the way of grip, so you’ll need to make sure you’ve got a firm hold of the phone.

A 4.5-inch display dominates the front of the LG F70, although its 800 x 480 resolution is a little disappointing as I’m now starting to see 720p options arriving towards the bottom end of the market.

That said, text is still perfectly legible on the F70, but if you look closely you can see that it’s a little on the grainy side.

The main selling point of the F70 however is it’s 4G connectivity at a lower price point, although I was unable to test out just how quick it could access the web during my short time playing with the device.

I was pleased to find Android 4.4 KitKat installed on the F70, the latest flavour of Google’s mobile platform, and LG has stuck its own interface over the top.

One of the features LG’s overlay brings to the F70 is Knockcode, a security function which the Korean firm has put on its low-end L-series devices as well as top end products such as the G Pro 2 and G2 Mini.

Knockcode allows you to wake the screen and unlock the F70 by tapping out a pattern on the display of between two and eight knocks.

It ‘s a clever idea, but one which is a little hit and miss as the F70 didn’t always register my taps, forcing me to repeat the pattern.

There’s a 1.2GHz quad-core processor and 1GB of RAM inside the LG F70 and it keeps KitKat ticking over nicely with smooth performance and no lag experienced during my hands on.

Rather annoyingly though for a mid range handset it only comes with a tiny 4GB of internal storage. There is a microSD slot allowing you to build on this, but it’s still a very low amount and I would have liked a minimum of 8GB.

The camera setup on the LG F70 isn’t much to write home about either, with a pretty average 5MP lens on the rear and a VGA offering on the front.

That’s fine for the occasional casual snap, but you won’t be shooting beautiful vistas with the LG F70.

The rear cover of the F70 comes off, giving you access to the microSIM and microSD slots and also the removable 2440mAh battery.

That’s a decent size and should keep the F70 going for a while, although you’ll have to wait for our in-depth review to see just how well it performs.

The LG F70 has a mediocre range of specs, but its main focus is the 4G connectivity at a lower price.

If 4G isn’t important to you then you may want to check out something like the Motorola Moto G, but for a hassle free handset with access to superfast data speeds the F70 isn’t a bad shout.