Organizer
Gadget news
Where can you legally fly your drone?
3:04 am | December 22, 2018
Author: admin | Category: Cameras | Comments: None

Is it a bird? Is it a plane? No, it’s probably a drone. Quadcopters, multirotors, and other forms of unmanned aircraft vehicle (UAV) have taken off in a big way.

We’re not talking about a novelty gift that self-destructs on impact with a lamp by the end of Christmas day, or serious hobbyist tech that costs thousands to put together. Those are toys for serious, long-standing enthusiasts.

We’re here to chat about affordable drones, equipped with cameras and capable of flying anywhere. These have been around for some time now, and the rise of consumer drones has been rapid. Prices have fallen, built-in GPS and stabilization systems have made them easier to pilot, and you can use them to capture stunning video footage.

These compact aircraft have also been hitting the headlines more often, with the likes of concerns being aired by the FBI over in the US – more on that later – and of course most recently, the rogue drone that brought Gatwick airport to a grinding halt for a day and a half.

Unsurprisingly, regulators have been left frantically writing a new rulebook on-the-fly (so to speak) to police the skies. So, what exactly are the rules so far?

What kinds of drones are there?

Before we get to the rules, it’s worth pointing out what a drone actually is. ‘Drone’ has become a bit of a blanket term that covers a lot of different aircraft types, but what they have in common is that they are unmanned. 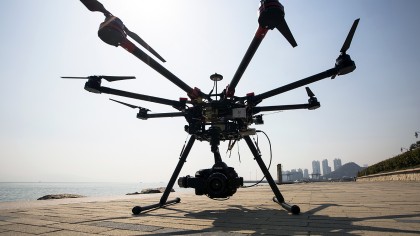 In the consumer market, they’re typically remote-controlled by someone nearby, though they may have the ability to fly autonomously.

They fly using rotor blades, like a helicopter, and the majority of the civilian drones out there are quadcopters with four sets of blades, which aids stability.

They also come in a wide range of different sizes. Many of them have cameras built-in to record the flight, some have the ability to accommodate action cameras, like the GoPro.

Some can navigate themselves, using GPS. Many drones have clever safety features; for example, if they lose contact with the remote control they may return to the last spot where they were in contact or find a safe spot to land. 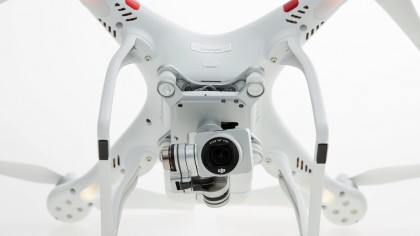 You can also get drones that route a live feed from their camera to your smartphone in real-time.

So what are the actual rules?

The Civil Aviation Authority (CAA) makes the rules in the UK, and the first thing to note is that you need permission from the CAA to fly a drone that weighs more than 20kg, or to fly a drone for “commercial use”.

As long as you aren’t being paid, and your drone, with any equipment it may be carrying, weighs less than 20kg, you won’t need to obtain a license.

However, one caveat to note is that if your drone is under 20kg, but has a weight of more than 7kg, some rules apply when flying in certain types of airspace (Class A, C, D or E airspace, unless you have appropriate permission from air traffic control as detailed in article 94, clause 4 here).

Before you take to the skies, there are some other rules to bear in mind. You must fly the drone “within sight”, with a limit of 400 feet in altitude and 500 metres horizontally.

Finally, an update to the laws which came into effect at the end of July 2018 stipulates that it’s illegal not just to fly a drone above 400 feet, but also to fly one within 1km of an airfield or airport boundary.

Breaking these laws could leave you open to prosecution, and in the case of those who are causing a potential hazard to an aircraft by flying a drone irresponsibly, they could face a sentence of up to five years in jail.

Furthermore, you should keep privacy laws in mind when operating a drone. Filming people without permission when they have a reasonable expectation of privacy is a crime. In practice, what you get away with depends largely on who sees you and whether they complain. 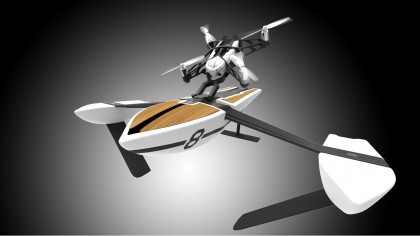 You might reasonably expect to be able to fly a drone in your back garden, but fly it in a busy local park, and you could be breaking the law.

Even stricter regulation is expected to be introduced to the UK come November 2019, when anyone operating a consumer drone weighing more than 250g will be required to register it with the CAA (as is already the case in the US). Furthermore, drone owners will have to undergo mandatory online safety tests.

In the US, the Federal Aviation Administration (FAA) has made similar rules. You can’t fly above 400 feet, the drone should be within line of sight, and you shouldn’t be within five miles of an airport, or near controlled airspace, such as over a stadium. You shouldn’t fly over groups of people, or near emergency response efforts, either. Flying a drone for commercial purposes without permission is illegal.

Any drone weighing more than 250g must be registered with the FAA, even if you’re only flying it around your back garden. Registering costs $5 and lasts for three years before you have to renew. You need to be at least 13-years-old to register a drone, otherwise a responsible adult must do it for you.

If you fly a drone unregistered, and get caught, the authorities could theoretically exact civil penalties in the form of a fine of up to $27,500, or potentially criminal penalties of up to $250,000 and/or going to prison for a maximum of three years.

When you register a drone, you get a unique FAA registration number, and there has been talk that it could become mandatory to display that number visibly on your craft – effectively making it a license plate.

Generally speaking, when flying your drone it’s best to exercise a little caution and common sense. Any high security area should obviously be avoided. The first drone-related conviction in the UK came after a man flew his drone over the busy Jubilee Bridge and a nuclear installation.

Another man was fined after he shot close-up video of Big Ben, HMS Belfast, the Shard, and flew over football matches at Anfield and other stadiums. He also had his equipment confiscated, and was banned from buying or borrowing drones in future.

And when it comes to malicious activity, you only have to look at the incident which has just occurred at Gatwick airport at the time of writing. This involved a rogue drone (or drones) flying near the airport, effectively shutting it down for a day and a half. Currently, police aren’t sure of the perpetrator(s) or motive, but the end result is clear enough – a massive headache for the authorities, airport and airlines, not to mention the poor punters who couldn’t get away on holiday.

There have been incidents Stateside too. Flying a drone into the White House gardens is a really bad idea, if you don’t want to end up with a prison sentence.

National parks are out of bounds, and it’s probably best to avoid Washington D.C. completely (it’s illegal to fly a drone within the city’s 15-mile radius “inner ring” airspace, for starters).

We’ve also heard concerns from the FBI about drones being used by criminals for all manner of nefarious purposes, including surveillance for robberies, helping drug smugglers to avoid Border Patrol agents, and spying on police stations to try and determine the identity of visiting informants.

All this has led to talk in the US of potential countermeasures such as the government employing drone-jamming equipment in sensitive airspaces (although that could have side-effects with other aircraft or signals).

And of course the UK authorities are currently mulling what to do about the threat of drones effectively shutting down an airport as large as Gatwick.

In both countries, then, with serious (and possibly terrorist-related) threats on the horizon, we could potentially be looking at much tighter regulation in the future.

There’s still plenty of fun to be had with drones, racing with other enthusiasts, or shooting dramatic videos. They are very manoeuvrable, much easier to pilot than the radio-controlled aircraft of yesteryear, and they offer the ability to capture shots that would have been out of reach for all but the most well-equipped and bankrolled professionals in the past.

As more drones take to the skies, as we’ve already mentioned, we’re likely to see more regulation and licensing, especially if there are more incidents like Gatwick.

If you’re going to buy a drone, make sure that you learn to use it properly, and read up on the rules before you take it out. Don’t fly near people or vehicles where you could cause distress, or worse, and stay well away from airports, flight paths, and sensitive security areas.

The KnowBeforeYouFly website is a good resource for more advice and the latest legal guidelines in the United States. British drone owners should keep an eye on the CAA website.