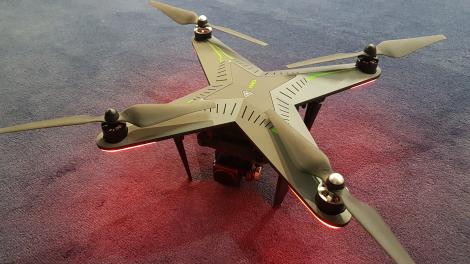 Consumer drones have a tendency to sport approachable and aerodynamic, rounded-frames that aim to camouflage the complex technology inside them for the everyday customer. So when we first saw the sharp edges of the Xiro Xplorer V, we were pleased that a manufacturer had prioritised a ‘look’ over and above this perceived approachability that has become the hallmark of consumer drones.

The Xiro Xplorer doesn’t hold back either, adding neon green embellishments to the powdery metallic looking black plastic shell and intense neon LED lighting, making the drone look nothing short of a miniature UFO. But it isn’t just the frame of the Xiro Xplorer V that can feel a little alien, at times the instructions and software that accompany the drone can be totally foreign too.

When you are able to launch the this sharp quadcopter in a large open park, it’s a relatively easy device to fly. It has an automatic landing and takeoff button, an uncluttered controller and a emergency homing button that’ll automatically fly the drone back to where you took off from. The controller and the drone connect with satellites and each other behind the scenes to make it as easy and fast as possible to get up in the air. All this makes for a simple and rewarding experience when it goes right, but also becomes difficult to problem solve if something isn’t working.

The Xiro Xplorer V’s maneuverability isn’t the best we’ve seen, but it isn’t particularly slow either with vertical acceleration capped at 10 feet per second (3 meters per second) and horizontal speed maxing out at 23fps (8m/s). Considering you can push the drone out to a perfectly reasonable 500m (1640ft) operating range and that it’ll stay in the air for up to 25 minutes on one battery, it is actually very much in line with the competition in terms of flight specs.

The Xiro Xplore app has come along a bit since the first time we tested it and you can now get version 2.2 on the Appstore and the Google Play store for iOS and Android respectively. The drone’s video companion app has all the necessary info including height, speed and distance measurements, WiFi signal strength, drone battery level, GPS signal strength, remaining SD Card storage and a GPS map all visible directly on the interface.

The camera controls and settings are also now all where they should be whit the various camera modes easily accessible on the right hand side of the screen and more in depth camera settings appropriately tucked away under a settings menu that operates notably smoother than the earlier Android app versions we tested in mid 2016. There is also an additional follow me setting that will have the drone pan and track you as you move that works well if you are outside and have plenty of space to play with.

Unsurprisingly the stabilized gimbal keeps the Xiro Xplorer V’s footage nice and smooth and the genuine 1080p footage is a good quality that you can work with. It’s worth noting that you will have to fly particularly slowly if you are attempting to film anything close to horizontal as the drone’s propellers appear in frame even with refrained tilting. It’s also unfortunate that Xiro has gone for such a wide fisheye lens that distorts the image at the edges of the video, meaning any rotation while filming will completely warp the picture.

Though it might sound like a less important factor when weighing up the appeal of a drone, one of the aspects we love most about the Xiro Xplorer V is the accompanying hardshell backpack which seems infinitely more valuable each time you actually take the drone anywhere.

All things considered this is a very standard drone in a well designed case. You won’t be disappointed by its flying capabilities and for the most part the camera footage will be adequate for general amateur videographers (we’d hesitate to recommending this for any professional requirements). It is a quality unit that is well worth the $600 (£460, AU$800) price tag that some retailers are asking for it, just make sure you get the backpack.