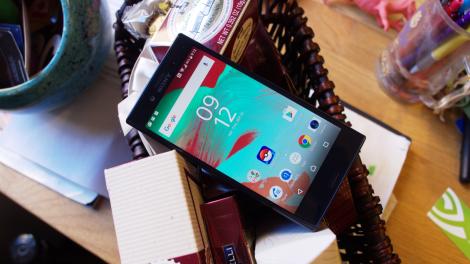 The Sony Xperia X Compact stands for something good. It’s a small phone in a world dominated by palm-stretching phablets. Like the iPhone SE, Sony’s latest is aimed squarely at the people who don’t want to let go of the miniature form factor.

In a market full of devices that look nearly identical to each other, Sony’s X Compact also has a style of its own, refined as ever, and a surprisingly long list of features for a phone its size.

But for all that it is, the Sony Xperia X Compact isn’t the cheapest or the fastest phone you can get your hands on. Heck, last year’s Sony Xperia Z5 Compact houses a slightly faster processor and is now the cheaper, waterproof option that the X Compact isn’t. Once outside of the Sony realm, you’ll find much even more deals on an unlocked Android phone that can run laps around it.

So, what do we make of the X Compact? If you can overlook the high asking price of $499 (£359, not currently available in the AU) there’s a good phone waiting for you on the other end.

For everyone else, the X Compact requires too much sacrifice. It’s a refreshing take on the modern smartphone, but serves as a reminder that size, whether big or small, isn’t everything.

Sony’s smaller device has launched unlocked for GSM networks in the US and UK for $499 and £359, respectively. That’s $100 more than the baseline iPhone SE and the same price as the larger, FHD screen-packed Nexus 6P.

Previously, Sony’s smartphone offering was more ingrained in the carrier market, though it has quickly transitioned to the unlocked side of things. You can purchase the phone through Amazon in the US, and in the UK, you can buy one on contract at O2, EE, giffgaff, Mobiles.co.uk, and SIM-free at Carphone Warehouse.

This has enabled the company to more swiftly enter new regions, but it has led to an unexpected downside for those living in the US.

The naming convention might lead you to believe that the X Compact is just a smaller version of the Sony Xperia X, but that’s not totally the case. Aside from some similarities with the rest of the line, the X Compact is unique with its flat front glass panel, rounded sides and a completely flat top and bottom.

Sony sent along the Universe Black color (that looks more like blue in the sunlight) of the X Compact, which measures in at 129 x 65 x 9.5mm and weighs 135 grams. One of the biggest design feats here is that it feels like a unibody design, though it’s constructed with a mix of Gorilla Glass 4, glossy plastic on its sides, and an oleophobic (oil resistant) plastic on the back that’s influenced by the look and feel of ceramic. While it does give off the high-end look it aims for, it collects small scratches and fingerprint smudges a little too easily.

Sony’s Xperia X Compact rocks two front-facing speakers, a selfie camera and a slim bezel. Taking a tour around the phone, the top is where you’ll find the 3.5mm jack. On its other flat end, Sony has opted for USB-C, which has resulted in a thicker chin bezel due to the longer internal section of the port.

Like the Sony Xperia X Performance, and other X-series phones, this one has a microSD and SIM card slot on the left side. It also has the same lineup of buttons on its right side, including the power button, volume rocker and camera capture button. Compared to other phones that usually place the most frequently used buttons near where the index finger rests, Sony has placed them awkwardly near the bottom. Even on a small phone like this one, you’ll likely fumble to make what should be a simple adjustment.

If you buy one of these outside of the US, the power button will double as a fingerprint sensor. However, Sony has decided to, once again, strip this feature from the US release. If you’re curious why the company made this choice, check out this piece and let us know if the fingerprint sensor (or a lack thereof) influences your purchase decision.

As you can see, the Sony Xperia X Compact has a lot in common with other Sony phones. It only makes sense. But what doesn’t make sense is that it lacks another signature feature: waterproofing. According to Sony, this phone isn’t even water resistant. It’s a strange turn for Sony’s compact line, which just last generation was fully resistant to dust and water.

Sony’s twist on Android Marshmallow 6.0.1 is in full effect here. If you’ve used an Xperia phone before, you know the deal. But if not, here’s what you need to know: it’s gorgeous and outright helpful sometimes, with the Xperia Lounge offering tips and exclusive wallpapers, among other goodies.

It offers up its take on the familiar stock apps, like messaging, music player, and a calendar, but those who already have an allegiance to a set of trusty apps are likely not to find reasons convincing enough to switch away from them.

Looking forward, Sony has confirmed to TechRadar that the Xperia X Compact will receive the update to Android Nougat in the near future, which will yield multi-window support, enhanced Doze mode and that cute, weird Nougat easter egg game.

Sony’s smartphones are usually equipped to deliver a superb multimedia experience, and the Xperia X Compact doesn’t fall far from the tree.

Starting with the screen, Sony has injected its 720p screen – which looks totally fine because of its small, 4.6-inch size – with the company’s own Triluminos and X-Reality tech, resulting in balanced color and contrast, and a picture that’s surprisingly sharp.

Listening to music through the X Compact is a relatively standard experience, unless you’re used to the 3.5mm-less iPhone 7, and if you’re an audiophile, you’ll like that Sony’s custom music app allows you to listen to high-resolution music files, such as FLAC and LPCM. The front-facing speakers sound decent, though their tinny output will have you reaching for headphones in no time.

The Xperia X Compact comes with 32GB of onboard storage by default, and lets you increase the capacity by way of its microSD card slot. Downloading extra games, music and movies won’t be an issue.

As this small phone is stocked with a decent amount of power and the full suite of expected sensors, it can handle gaming easily. Whether you play a game that requires tilt, or one that demands power, the X Compact doesn’t break a sweat – even when we thought it would.

The Sony Xperia X Compact’s specs are somehow a little better and a little worse than Sony Xperia Z5 Compact.

After a little digging, we discovered that the 650 actually houses two ARM Cortex-A72 cores, which promise double the performance and better efficiency than what’s delivered by four of the mid-range-targeted A57 cores used in the 810 architecture. All told, the 810 still achieves better numbers due to the sheer number of cores, but the 650 accomplishes a heck of a lot with less. Point being, the drop of two cores won’t impact many.

As stated earlier, playing our favorite games is something that the X Compact can do well, and Sony has boosted the RAM count up from 2GB to 3GB to keep things smooth into 2017. This is where things are looking better.

We put the Sony Xperia X Compact through GeekBench 4 to see how it performs compared to some of today’s top contenders. It put up an average multi-core score of 3,331, which puts it – not too surprisingly given the research detailed above – not too far back from the Snapdragon 810-toting Nexus 6P that scored 3,445. Of course, the Samsung Galaxy S7 spanked them both with its Snapdragon 820 and a score of 3,880.

Despite our initial worry, we aren’t left with performance that suffers greatly because of the chipset downgrade, but we’re still puzzled why the substitution was made. Maybe we’ll find out in the upcoming battery section.

Like the Sony Xperia Z5 Compact, the X Compact features a 2,700mAh battery. For a phone its size, it’s a good amount of juice and can keep the phone going with very minimal use for well over two days.

If you’re a moderate to heavy user, as most people are these days, the X Compact will likely last you through the day. We found that on a day spent gaming, hopping on a few video calls and using Google Allo frequently, battery carried on into the next day, but barely. You’ll probably still just want to fill it up at night.

Compared to previous Sony phones, the X Compact shows superb battery retention, even after viewing an HD movie for 90 minutes. It only dropped down to 84%, which is a testament to the more efficient ARM Cortex-A72 cores used here.

Moving onto the camera, what we have here also isn’t changed all that much from what was packed into the Sony Xperia Z5 Compact – not that it’s a bad thing. The main camera shoots 23MP photos with 5x optical zoom, but it has been switched from the Exmor RS to the Exmor R, which is more skilled at low-light shooting.

Other notable differences over the last iteration is the added 5-axis image stabilization and HDR photo mode. Unfortunately, 4K video recording has gotten the axe in favor of 1080p (FHD) video at 60 frames per second (FPS).

In our time with the phone, we found that the photos shot with the auto mode came out highly detailed with accurate colors and contrast. A few examples that you’ll see on the next page are over-exposed in auto mode, but that is easily remedied by the manual mode – that is, if you have the patience to adjust the settings for each photo.

The front-facing camera runs on an Exmor R sensor as well and can shoot 5MP pictures with its 25mm lens that has an aperture of f/2.4. You won’t see the low-light prowess coming through on this selfie cam, but it’s still a pretty serviceable camera when you need it.

Touching lightly on the camera software, it’s intuitive and fun to use. Switching between the front and rear cameras is as simple as swiping across the screen, and Sony’s well-placed shutter button loads the camera app in a snap. It even lets you do a half-press to get things in focus before committing to a shot. Sony’s camera app is on par with Samsung and LG’s in terms of its ease of use and feature list.

By using the success of the Sony Xperia Z5 Compact as a blueprint, Sony has gone surprisingly far off-course. It had a tough, waterproof build and turned it into a more premium body that looks swell, but scratches easily and, well, isn’t waterproof. The ever-so-slight downgrade in chipset is a bit confusing, too.

As with the entire X-series of Xperia phones so far, we’re mystified by some of these changes. On top of that, the X Compact is priced high at $499 (£359, not currently available in the AU). This begs the question: who exactly is this phone for?

For those with small hands or a longing for a device that can easily fit in one hand and comfortably into a pocket.

Should you buy it?

If you have money to burn, then perhaps. However there are many, many Android smartphones available for less cash that do a better job at balancing the value factors, like build quality, features and specs.

By no means is the Sony Xperia X Compact a bad phone. It got a boost of RAM and a slightly more efficient chipset over last year’s model, and USB-C support. But these enhancements, while nice, have come at the expense of what made us love the excellent Z5 Compact so much. Sony’s hoping you won’t notice, but it’s hard not to.