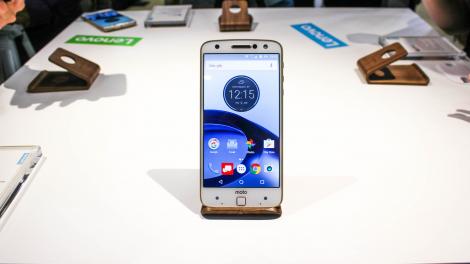 Raise your hand if you dropped a phone before. Did you drop a phone just now in an effort to raise your hand? Good news, you can upgrade to the Moto Z Force soon.

It’s Motorola’s more practical modular phone that adds a bit of thickness compared to the Moto Z in exchange for a shatterproof screen and bigger battery.

The Moto Z Force camera also comes ready to take higher resolution photos that I can wait to test out further now that I got my hands on the nearly final phone.

There’s just one catch: the Moto Z Force release date. It may not come out at all, unless you’re on Verizon and live in the US. It’s limited to the carrier and States at this point.

Like its slimmer Z sibling, the Force is an all-metal smartphone and uses modular accessories that latch onto the back.

Yes, this makes the Moto Z comparable to the LG G5, but it’s better in keys ways. It doesn’t require restarting the phone and it magnetically fastens into place.

There are also more Moto Z and Moto Z Force modules at the ready (and more promised), from an obvious battery case to the standout mini projector.

There is already more potential behind the Moto Z modular future than anything we’ve seen except for Project Ara, and that’s a little more experimental and further out compared to what we’ve seen today.

You’ll also find a fingerprint sensor on the front, with a large chin dedicated to it – large when you consider this phone still uses on-screen buttons, too.

There are three Moto Z Force colors: black, gold and rose gold, the last of which is exclusive to the Force. The regular Moto Z has just gold and black.

Don’t worry too much about the two colors when it comes to the backs, because I found the “style shells” (what Moto calls the magnetically snapped-on cases) to add to the color options in post. There’s wood, leather and plastic to choose from at the moment.

The Moto Z Force uses all of the same modules as the Moto Z, meaning you you’re getting to add cases and at least three creative accessories

I found the Moto Z projector, dubbed Moto Instant Share, to be a the most novel, even if it ends up being a niche product that a majority of eventual owners will never use.

It was easy enough to snap and demo the projector that made the frame much thicker, but shined a 70-inch version of the phone screen into a nearby wall.

The speaker system add-on slaps an entire JBL speaker to the back of the phone and even sets the music up to blast the right direction with a cool kickstand. It’s metal and feels sturdy to prop up.

The Moto Z battery case modules aren’t anything too out the ordinary in design, so Motorola made sure to partner with big brands like fashion designer Kate Spade and luggage company Tumi to delivery both style and power

I felt like each module was securely locked into place thanks to four unseen magnets hidden on the phone side and the accessory side. It’s easy to snap things on, yet painless to peel them off with a fingernail; no tools or reboots required.

This is where Moto Z Force is a little more ordinary. It uses a lot of the same internal specs we see in today’s best phones For 2016.

There’s a Qualcomm Snapdragon 820 processor, 4GB of RAM and an embedded Adreno 530 GPU. Like most of today’s phone, it switches over to a USB C connection on the bottom.

Internal storage consists of 32GB and 64GB options, and while there is no 128GB version, it does come with a microSD card slot (which can turn into a second card slot) and I can just imagine a future add-on that combines battery power with laptop-like extra storage space.

It’s nice to see the Moto Z Force specs don’t fall behind the competition even with its modular focus. It’s able to pull off the exact same internals as the LG G5, HTC 10, Asus Zenfone 3, ZTE Azon 7 and the US versions of the Samsung Galaxy S7 and Galaxy S7 Edge. Basically every phone is becoming the same on the inside.

This is another Android 6.0.1 Marshmallow phone too and while that’s the mobile operating system of the box, this is a Motorola phone. It shouldn’t have any trouble upgrading to Android N when it arrives in the summer.

The former Google-owned company also runs a near stock version of Android and its policy won’t change now that it’s under the Lenovo umbrella.

It also limits its own apps in the app drawer to useful things, though as a Verizon phone it does come with some carrier related bloat ware and repeat apps Google already makes (and makes more efficiently – I don’t need VZW Navigator, thanks).

What I really like about the Moto Z Force software is hay it uses the IR sensors for Active Display to wake the display without touching it, just like past Moto X phones, and custom voice commands return to the ecosystem. Despite the Z Force name, it’s really the Moto X 2016.

The Moto Z Force camera is 21MP in the back, which makes its a higher resolution than what I found on the 13MP Moto Z. But that doesn’t mean everything in today’s phones.

It really all about their post-processing software, as we have seen with the stellar Samsung Galaxy S7 Edge and S7 Edge, which have 12MP, but are stunning in lowlight.

The Moto Z camera is 13MP with larger-sized 1.12um pixels, and includes a f/1.8 aperture with optical image stabilization and laser autofocus. The front-facing camera is 5MP and with an f/2.2 aperture and 1.4um big pixels for better low light.

There’s supposed to be zero shutter lag, but I have to take this one out of the demo room to get a better idea of how this performs in normal conditions. I’ll update this hands on review when that happens this summer.

However, I can tell right now that I like the default Moto Z camera app better. Previous Moto Z cameras included a clutter-free design that hid options and made it for casual users.

I can now adjust the camera easier on this new phone and even found a Professional mode to fine-tune my snapshots manually.

Battery life is the other aspect that’s going to need more time for me to check out, but I can tell you right now that this phone contains only a 2600mAh battery,

The thinner design also comes at the expensive of a serious camera bump. All of a sudden the battery case mods make convincing arguments.

Here the good news: Motorola says that Moto Z battery life is rated for 30 hours of mixed use, with the ability to TurboPower with a USB C cable and last 8 hours after just 15 minutes of charging.

Moto Z Force is technically the better of the two new Android phones from Motorola. It better a bigger battery and a shatterproof screen in exchange for a little more heft.

That’s okay, because it’s compatible with all of the same awesome accessories that I played with minutes prior with the Moto Z Force. It’s already better than what used with the LG G5.

It has a much better snap-on design that doesn’t and the ideas are more creative: a loud JBL speaker, mini projector and fashionable battery backs.

It’s not as thin as its all-metal counterpart and still contains that very noticeable camera bump. But it’s just as powerful as today’s smartphones with a Snapdragon 820 processor. It’s only big issue, and this is a deal breaker for a lot of people, is that it’s a US only phone and, at that, glued to Verizon.

We’ll have more on the Moto Z Force when we get more hands on time with the phone. Until then, please, see what the more global-friendly Moto Z can do.