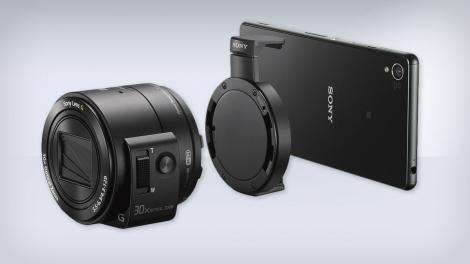 When Sony first introduced its concept for a lens camera, it seemed like an interesting solution to the problem of declining compact camera sales.

It looks like a giant add-on lens for your smartphone, but it’s actually a complete camera. The only role your smartphone plays is as an interface for controlling the camera, viewing your photos and, of course, sharing them via social media if you like.

At the time Sony introduced the QX10, which had a sensor of a similar size to a standard compact camera, and the QX1, which featured the same one-inch sensor as in the RX1 premium compact camera.

We can assume that the concept has proved reasonably successful for Sony, as it has now introduced two further models. The QX30 has a 30x optical zoom, as well as a sensor the size of that in a compact camera. The other new model, the Sony QX1, features a larger, APS-C sized sensor and interchangeable lenses.

The QX30’s sensor is a 20.4 million pixel, 1/2.3 inch CMOS device. That 30x optical zoom gives an equivalent 35mm focal length of 24-750mm, which gives your smartphone (or tablet) much more flexibility than its built-in single focal length device.

Also featured is a Bionz X processor, the same chip as found in the company’s top of the line cameras, including the A7 full-frame compact system camera. This should mean that it has fast processing speeds and is capable of producing low-noise images in low-light shooting scenarios, though small sensors like this are more noisy in the first place.

In order to control the camera, and indeed see what image you’re composing, you’ll need to rely on Sony’s SmartMemories mobile app, which is available for both iOS and Android as a free download. Within this app, you can use fully automatic modes, as well as aperture priority, shutter priority and Program Auto mode.

Competition for the QX30 is hard to pinpoint as these types of cameras are still pretty unusual within the marketplace, but it could be argued that cameras such as the Sony HX60 and the Panasonic TZ60, which also feature 30x optical zooms are the obvious choice.

With its 30x optical zoom, the QX30 is significantly larger than the QX10. That said, when the lens is collapsed, the overall size of the camera isn’t too large. The shape of it means, though that, unlike something like the HX60 superzoom camera, it’s unlikely you’ll be able to fit it into a jeans pocket.

There are two main ways to use the camera – you can attach it to your smartphone via the extendable clip on the back of the camera, or you can use it entirely separately, such as by attaching it to a tripod via the thread on the bottom of the camera and control it from a different position – useful if you want to take a group/self portrait or shoot from an awkward angle.

As most of the control of the camera takes place via the PlayMemories app, there are just a few buttons on the QX30 itself. Aside from the on/off button, you’ll only find a shutter release and a zoom switch. Both of these aspects can also be controlled from the app if you prefer, or if you’re controlling the camera from some distance.

In order to connect the camera to your smartphone or tablet, you can use either NFC if you have a compatible device, or Wi-Fi if you don’t. Hooking up the two devices via NFC is much easier as it requires only a simple tap together of the two – the first time you connect, if you don’t have the PlayMemories app you’ll be prompted to download it. From there on in, the app should load automatically when you tap the two devices together.

Although in theory the idea of NFC is very good, there were several occasions during the test (when using a Sony Xperia Z2) when the camera refused to connect, and I had to power the phone on and off to get it to work. This can be very frustrating when you want to take a quick photo.

Connecting via Wi-Fi seems to be a little more reliable, but you do of course need to set it up in the first place – you’ll find the password located under the battery flap, but once you’ve connected once your phone should remember it.

Although there’s not much in the way of display lag when using the camera via either connection method, the shot-to-shot time is quite slow, which can be another frustrating element of using the camera. Usually, you’ll press the shutter release icon on the app, and a loading icon will be displayed, three to four seconds later, the app will show a ‘Fetching’ bar, and a second or so later, the camera will be ready again to use – it’s not exactly the speedy experience you’ll get with a normal camera.

Going back to the app interface, if you’re shooting in aperture priority or shutter priority, along the bottom of the screen, you’ll see various parameters you can change, such as aperture, exposure compensation or ISO (sensitivity). Simply tap the setting you want to change, then swipe with your finger along a virtual dial to change the setting. In order to set the autofocus point, simply tap the point on the screen you wish to use as the focus point. You can also set it to fire off the shutter release with the tap of the screen.

As is stands, you still can’t use the camera with other apps as a native camera, such as Instagram, which means you’ll need to take a photo with it that you later edit in such apps.

As we’ve come to expect from most Sony compacts of late, the QX30 puts in a good performance in most areas of image quality.

Colours directly from the camera are bright and punchy, while its high pixel count results in reasonably detailed images. That said however, if you examine images shot even at low sensitivities, such as ISO 100, you can still see some examples of image smoothing – the overall impression of detail is excellent though.

Automatic white balance copes fairly well with mixed or artificial lighting, but if the camera is struggling to get the colours right, you can also change to a more appropriate white balance setting in aperture priority or shutter priority mode. You can’t change the metering setting, but the camera’s all-purpose setting copes reasonably well in the majority of circumstances.

As you move through the higher values in the sensitivity run, such as ISO 800 you start to notice more noise creeping in. It’s not until around ISO 1600 that it starts to become problematic however, and I’d only really recommend using ISO 3200 if you’re desperate.

Within the PlayMemories app, there’s no offer of digital filters, or even panorama mode, so it’s a little bit limiting to creative photographers on the one hand. On the other, you have a world of Android and iOS editing apps (including Instagram) to alter the look of your shots after you have taken them at your disposal. It’s a shame not to see panorama mode, though.

As I’ve already mentioned, shot-to-shot times are pretty slow thanks to the speed of the app, but at least focusing is pretty quick in the majority of circumstances, though if you’re shooting in particularly low light you’ll find it takes a little longer for the camera to lock on to the correct subject.

With it’s headline feature being its 30x optical zoom, it’s important that this performs well. At the furthest reach of the telephoto optic, images are clear, while the optical stabilisation does a good job of keeping images blur free. But it’s better if you can use the camera on some kind of stand or resting place when shooting using the optical zoom, since it can be a little unbalanced when attached to a phone.

As part of our image quality testing for the Cyber-shot QX30, we’ve shot our resolution chart.

If you view our crops of the resolution chart’s central section at 100% (or Actual Pixels) you will see that, for example, at ISO 100 the Cyber-shot QX30 is capable of resolving up to around 20 (line widths per picture height x100) in its highest quality JPEG files.

Examining images of the chart taken at each sensitivity setting reveals the following resolution scores in line widths per picture height x100:

We shoot a specially designed chart in carefully controlled conditions and the resulting images are analysed using DXO Analyzer software to generate the data to produce the graphs below.

For more more details on how to interpret our test data, check out our full explanation of our noise and dynamic range tests.

Analysis: The QX30’s signal to noise performance is quite disappointing compared to that of its chief rivals (conventional long-zoom compact cameras). It does show a sudden leap at ISO 1600, which could suggest an extra level of noise reduction kicking in. The ISO test images on the next page show less noise but more smoothing at ISO 1600 and 3200.

Analysis: The QX30’s dynamic range results across the ISO range is similar to the Sony HX30’s but worse than rival long-zoom compact cameras from Panasonic and Canon.

At its widest point, the 30x optical zoom gives you lots of scope to capture a wide angle of view.

You can focus pretty close to the subject.

Generally, the automatic white balance copes well, but here we can see a slight cold tinge – switching to a more appropriate white balance setting can help with this problem.

Colours are very bright and punchy directly from the camera.

Detail is well resolved by the 20 million pixel sensor.

You can’t change the camera’s metering mode, but generally it copes pretty well with producing a balanced exposure.

Here we can see the 30x zoom in action – this is a shot taken at the fully wide angle end of the lens.

Here you can see the 30x zoom closes in on the bridge in the centre of the previous frame.

The QX cameras continue to be an intriguing prospect that produce excellent images, but do come with their own set of problems.

First of all it’s not exactly a camera for quick snapshots, as you need to connect it to your smartphone or tablet every time you want to use it (well unless you don’t mind not being able to see what you’re shooting). Sometimes, in my testing at least, it just wouldn’t connect, or would be slow to form the connection – which is frustrating.

On the plus side, image quality is very good, and it’s nice to have the opportunity to use an extensive zoom range with your smartphone.

The 30x optical zoom range is very flexible, making it perhaps a useful addition for your holiday bag meaning you don’t have to carry around a dedicated camera. The bulky size of it may mean that you’d be better off carrying a slim compact camera anyway for your jeans pocket.

This is not a camera for spur-of-the-moment shots, and that can make it very frustrating to use. Simply trying to connect the camera to take a shot can be a difficult waiting game that doesn’t always work.

Ultimately, the success of this camera relies on the device that you’re using it with. We used it with both an Android phone with NFC and an iPhone with Wi-Fi, and neither was a seamless, particularly quick experience. It’s an interesting concept that needs some work to make it better – but good if you really don’t want an entirely separate camera device with a 30x optical zoom. It’s also worth a look if you like to shoot a lot of photographs on a tripod, self-portraits or group shots.