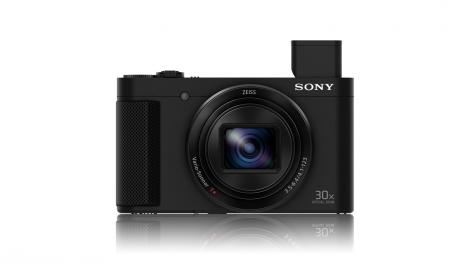 Smartphones are getting so capable at taking pictures that you need a good reason to take an actual camera with you when you travel these days – and one compelling reason is that you’ll generally get a more powerful zoom lens.

But why stick at the paltry 5x zoom range you get with a typical point-and-shoot camera when you can get a whopping 30x zoom instead?

That’s the thinking behind ‘travel cameras’, a sub-genre of the compact camera market that packs a big zoom range into a small body. They cost more than regular compacts, but when you’re on the trip of a lifetime you won’t want to miss a moment of it.

Panasonic has long been king of this particular sector, and it’s the Panasonic TZ70 which sets the benchmark for performance, usability and results – this is the camera Sony’s new HX90V needs to beat.

The HX90V replaces the Sony HX60, and the most significant difference is the introduction of an electronic viewfinder (EVF), which makes the HX90V almost a miniature version of the Sony’s RX100 III/IV high-end compact camera – it collapses into the body of the camera to maintain the small size and clean lines.

The 30x zoom range is the same as the HX60’s, giving you an equivalent of a 24-720mm zoom range in 35mm terms. However, for the newer model, it’s a superior Zeiss optic, compared with the HX60’s Sony G lens. Sony has also managed to reduce the physical size of the lens by around 30%.

Like the HX60, the HX90 has Sony’s SteadyShot system, but the stabilization has been extended from 3-axis to 5-axis, which should mean blur is avoided in a wider range of situations – and this stabilization operates for stills and video recording.

Other differences from the HX60 include the addition of Expand Flexible Spot AF to help with focus tracking (the system uses a larger spot to track the subject if it is momentarily lost), the ability to adjust the speed to lens zooming, and the ability to bracket exposures when using self-timer mode.

Both versions have Wi-Fi and NFC connectivity built in, and are compatible with some of the apps available via Sony’s PlayMemories scheme, where you can buy app add-ons to extend your camera’s capabilities.

The HX90V is impressively slim, considering it houses not only a 30x optical zoom, but also an (albeit small) electronic viewfinder. You should be able to slip this easily into all but the tightest of pockets, and it’s nice and lightweight too.

On the front of the camera is a ridged area where your forefinger rests, making it feel nice and secure in the hand. There’s also a small thumb rest on the back of the camera.

The electronic viewfinder is deployed with a two-step process. First you flick a switch down to pop the viewfinder up, then you pull part of it back – it would be nice if this was an automated process.

The viewfinder is useful in bright sunshine when it’s difficult to use the main screen, but it’s quite small and I didn’t find that I wanted to use all that often; there’s also no eyecup, so it can be a little distracting to use. Popping up the viewfinder switches on the camera, while pushing it back inside its housing switches it off. If you’re not using the viewfinder there’s also an on/off button on the top of the camera.

All of the HX90’s buttons are on the right hand side of the camera, which makes it easy to use one-handed. The buttons are a little on the small side, so those with larger fingers may find them fiddly. The mode dial on top of the camera is within easy reach of your thumb, so you can quickly scroll to a different exposure mode – it’s also not too loose, so it’s unlikely that you’re going to change modes accidentally.

Pressing the Fn (function) button activates the quick menu. There are various options here by default, but you can customise it to your own shooting preference if you prefer.

To change the autofocus point you select Flexible Spot mode, press the button in the middle of the scrolling dial on the back of the camera and then use the directional keys to choose the point you need. It’s not a difficult process, but it can be a little laborious if you need to get from one side of the screen to the other – a touch-sensitive screen would make this operation much quicker.

The HX90’s screen can flip forward to face the front, making it useful for shooting from some awkward angles, but it can’t be angled downwards. If you face it all the way forwards, self-timer (selfie) mode will automatically activate, although if you have the viewfinder raised you’ll need to push this back in to get a completely unencumbered view of the screen.

In good light the HX90V is capable of producing some beautiful images. There’s a good level of saturation, and images feel nicely warm. You can experiment with a few Creative Styles when you need your images to look a little different.

Detail is reproduced well at the lower end of the sensitivity scale (ISO 100-400), with fine detail being visible even at 100% magnification.

The overall impression of detail is maintained well at higher sensitivities of ISO 1600 to around ISO 3200 (subject depending) when images are viewed at A4 or below. However, if you examine images at 100%, it’s possible to see some image smoothing and loss of detail. That said, it’s better than the HX60 – Sony seems to have taken on board some of the criticism of its noise reduction system.

Sample image: In good light the HX90V is capable of producing some lovely images. The tilting screen helps with shooting from tricky angles. Click here to see a larger version.

There’s also the option to use Multi-Frame Noise Reduction and shoot at ISO 12800, but the resulting image looks very much like an oil painting, so I wouldn’t bother unless getting the shot is more important than its quality.

It’s a shame that you can’t shoot in raw format with the HX90V, especially when you consider that its main competitor (the Panasonic TZ70) can – this would enable you to apply your own preferred level of noise reduction.

For optimum image quality I’d recommend keeping below ISO 1600 – this isn’t an ideal camera for low light shooting, although if you’re using it as a general travel camera this may not be a major issue.

Sample image: The 30x optical zoom gives you a 720mm shooting length, which should be enough for most scenarios. Click here to see a larger version.

Our labs tests suggest that the Panasonic TZ70 outperforms the HX90V for signal to noise ratio at the lower end of the sensitivity scale, but is overtaken by the Sony from ISO 1600 and above. Remember, though, that the TZ70 does offers raw format shooting.

Although the lab data suggests that the HX60V performs better for Signal to Noise Ratio and Dynamic Range, this is likely due to Sony’s changed noise processing, which now favours detail retention over noise reduction – in the real world this equates to more natural-looking images.

Sample image: The HX90V has coped quite well here with an area of high contrast in this scene to produce a fairly balanced exposure. Click here to see a larger version.

Sample image: There’s a decent amount of detail to be seen at the lower end of the sensitivity scale, and if you examine at 100%, there’s not too much image smoothing going on – an improvement from the HX60V. Click here to see a larger version.

The HX90V’s general-purpose metering system works well to produce accurate exposures in a variety of different conditions, and you should find that you only really need to apply exposure compensation sporadically, and only in situations where any camera would struggle.

The automatic white balance system also works well; it’s not fazed by artificial lighting, and gets colours right the majority of the time, even under overcast skies.

Different Picture Effects can be utilised for creative and fun effect, and while it’s nice to use these, remember that without raw format shooting available, you’ll be stuck with whatever effect you choose, with no opportunity to change it later.

Image quality is pretty good throughout the zoom range, but while the optical image stabilisation works hard to prevent blur at the furthest reach of the lens, images don’t appear quite as detailed at the maximum zoom setting.

We’ve put the HX90V through our full set of lab tests to compare it against its chief rivals – the HX60V (its predecessor), the Nikon Coolpix S9900 and the class-leading Panasonic TZ70.

Resolution analysis: The HX90V has a higher-resolution sensor than the HX60V before it and this, combined with Sony’s changed approach to noise reduction, gives it a useful resolution advantage over its rivals, even the Panasonic TZ70.

Dynamic range analysis: This is a test of the camera’s ability to capture a wide range of tones, and its ability to hold detail in the darkest and brightest parts of the scene. Here, the TZ70 is the winner, by a small margin, while the results from the HX90V, the HX60V and the Nikon S9900 are closely matched.

Signal to noise ratio analysis: Not surprisingly the changes to Sony’s noise reduction processing, which prioritise resolution, have also produced a little more noise, especially at lower ISO settings. Its rivals produce less noise but, given the choice, most photographers would probably prefer the extra sharpness of the HX90V.

The HX90V’s specifications make it a very appealing camera on paper, and in most respects is competes strongly with the Panasonic TZ70’s.

However, the Panasonic just about edges it in terms of real-world image quality, particularly when you consider that the TZ70 enables raw format shooting. The HX90’s images aren’t bad, though – in fact, they’re really very good, especially when you’re shooting in favourable lighting conditions.

One of the most appealing things about the HX90V is its impressively small size – it can be easy to forget that you’ve got the power of a 30x optical zoom lens here – and while the viewfinder is quite small and not something you’re going to want to use for every shot, having it at all is a bonus for a compact camera.

The HX90V is a good all-round camera for travel and holiday photographers. You can leave it set to full auto shooting and forget about it if you want, but if you’re an enthusiast, having the option to shoot in manual or semi-automatic modes is nice. The design and controls are well thought out, and make this an easy camera to use.

Aside from the lack of raw format shooting, the other big feature missing from the HX90V is a touch-sensitive screen. It’s not crucial, but these are helpful for adjusting certain settings, such as the autofocus point, quickly, and make scrolling through menus a quicker process.

The HX90V is a solidly performing all-round compact camera that offers a lot, but doesn’t deliver in every single area. There have been some improvements to image quality, but it’s still not fantastic for low light shooting. If you think you’re going to want raw format shooting, the Panasonic TZ70 is the better bet; otherwise the two are reasonably evenly matched.