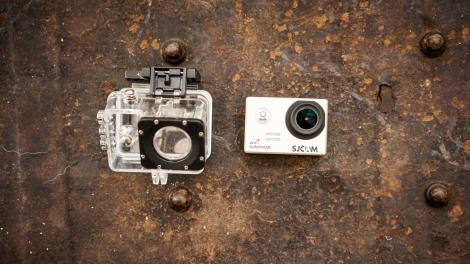 4K video has been one of the big selling points for the premium GoPro Hero Black series, but now 4K is appearing in the latest batch of budget action cameras, including the SJCAM SJ5000X.

This ultra high resolution footage is just one of a string of features that until recently was uncommon in a camera of this price. Other features include Wi-Fi, cycle recording, image stabilization, motion detection recording and modes that enable it to be used as a dashboard video camera.

Video resolution and frame rates are key to the success of an action camera and as well as 4K at 24fps the camera offers 2k at 30fps, 1080p at 60fps and 720 at 120fps giving you plenty of scope. The footage is captured on a Sony Exmor 1/2.3in CMOS sensor with 12.4 million pixels, a similar sensor to the one that appeared in the superb iSAW Edge.

The SJ5000X looks like the GoPro Hero series of cameras, with a removable 30m waterproof housing that is secured by a compression lever lock. The case is similar to the older styled GoPro Standard waterproof housing. When placed side-by-side against the Hero4 case, it is larger in all dimensions especially depth. The case also features the old safety lock design that makes the case impossible to open accidentally, and even when you purposely try to release the lock it can be tricky. The lens features the screwed in cover design rather than the newer smooth case design of the latest GoPro’s. Although this makes clipping filters on very easy, it does become a dirt trap in muddy conditions.

The control buttons around the case are again similar to the old GoPro style, but here there are five in total which means that the actual surface area for the button is quite small. However, the design of the buttons is well executed and even in cold conditions wearing gloves it’s easy enough to select the option you want.

On the base of the case is the familiar GoPro style mount, which means that the camera can easily be mounted on the majority of existing GoPro mounts.

Removed from the waterproof housing, the design similarities between the SJ5000X and GoPro continue with a mode button on the front, shutter button on top and on the side three buttons that activate the Wi-Fi and image stabilizer followed by up and down navigation buttons. On the opposite side are the USB port for charging or connecting to a computer, Micro SD card slot for storing footage and an HDMI port for plugging directly into your TV. The 900mAh battery supplies around an hour and a half of use and is accessed through a hatch in the base of the camera.

The back of the camera features a 2-inch LCD screen which is bright, clear and crisp and fine for viewing when composing a shot, reviewing footage or navigating menus.

The overall quality of the case is good and it feels solid and built to withstand a good few knocks. A direct comparison with the GoPro does show that the quality of finish for the plastic for both the case and camera isn’t quite as high, but then again the price is considerably lower.

Navigation through settings is easy enough and the two navigation buttons on the side of the camera make it easy to find your way around.

The camera makes the most of the standard GoPro mount design and attaching the camera to almost anything is easy enough, although the slight additional bulk and weight of the SJ5000X does mean that you need to take extra care to make sure that all bolts are fully secured on your mount to avoid wobble.

Unlike the GoPro Hero range or the iSAW Edge, there’s no direct power on and record button, so the camera first needs to be switched on using the Mode button and then the shutter button to record. Changing resolutions and modes is quick and easy, though, using the buttons on the camera and the large clear screen.

As with the majority of new action cameras, Wi-Fi comes as standard and is activated with a quick push of the dedicated button on the side. Once on the SJCam Zone app is downloaded (iOS or Android) it can quickly be paired to the device using Wi-Fi. Connection quality between the camera and mobile device is good, but there is a noticeable delay of a good 1-2 seconds, depending on your location and the distance between devices. Along with live view, the app enables you to adjust all of the camera’s settings and modes as well as review what you’ve shot. Reviewing footage is costly on storage for your mobile device, though, as there is no way to stream between camera and mobile. Instead, a selected file needs to be downloaded to the mobile device before it can be previewed. As the SJ5000X has a decent screen, though, locating the footage you want prior to downloading it isn’t too much of an issue.

This camera has three features that are really worth a mention; Cycle recording, Slow Movie and Motion detection.

Cycle recording enables clip recording in time intervals of either three, five or ten minutes – or you can switch it off for a continual recording session. This means that after filming you end up with a series of short videos that you can quickly skip through and select from, and this makes downloading the clips you want quick and easy.

Finally, there’s motion detection, which starts and stops recording only when the camera detects movement. This feature works incredibly well and again is a great time saver when it comes to editing down footage.

Unlike some of the more established brands, SJCAM doesn’t feature its own social community or editing software, so if you do want to share your footage on the move, clips need to be downloaded and edited in the app of your choice before they are uploaded to your preferred social network.

When it comes to video options SJCAM offers a good selection, from high resolution 4K for capturing stunning vistas to smaller 720p video at 120 fps for slow motion. Settling on a more standard 1080p at 60fps demonstrated the camera’s potential under normal use and conditions.

The lens performs well with the image showing the usual distinctive action cam fisheye distortion. Checking the sharpness reveals good clarity across the frame, but close scrutiny does show some softening and chromatic aberration in high contrast areas and towards the edges.

Sample footage shot at 1080p 60fps: Colour saturation is good and very natural. Contrast is a high and shadow detail can get lost.

Faster motion is captured well with no dropped frames. The slight vibration is caused by the mount rather than the camera.

Flare can often be an issue once you put action cams in waterproof housings, but here the SJ5000X’s bulky case didn’t seem to increase the influence of flare in any way. Direct comparison with footage from the GoPro Hero4 Black shows that the two camera handle flare in much the same way.

Looking at the image quality, the video initially looks clear and crisp with good contrast and saturation. The contrast is a little too high in bright high contrast lighting, though, and this affects the dynamic range, especially in the shadows. Darker areas of video will loose detail, though highlights are well balanced and the camera’s auto white balance and colour saturation does a good job. Overall, the colour is natural, especially when compared with the warmer tones of the GoPro series cameras.

The auto exposure system handles movement from light to dark well, and although there is some burnout in highlights, the auto exposure adjusts quickly to recover the image. In low light conditions the auto white balance does struggle, especially under fluorescent light, but manages to keep noise in check.

Side-by-side comparison of motion footage from the SJ5000X and GoPro Hero4 Black.

Side-by-side comparison of stationary footage from the SJ5000X and GoPro Hero4 Black.

The choice of resolutions and frame rates is good choice for this price of camera with. The different resolutions all produce good usable footage and 24 fps at 4K is enough to make that high resolution footage usable. The 4K footage is actually interpolated, however, with the real resolution being 2880×2160. This interpolation does reduce the quality but it’s only noticable when compared directly with other 4K footage, from the GoPro Hero4, for example.

Overall, the visual quality of the footage is excellent especially when you consider the price. Control over the exposure, white Balance and ISO are a nice touch, but the addition of contrast and saturation adjustments would really take the image quality control up a level.

Price, features and decent image quality make this camera very appealing, and the SJ5000X would be a great action camera for the family. For extreme use, the case does raises concerns due to the older bolt style lens cover design that is difficult to keep clean. The slightly greater depth and larger case also make it a little more cumbersome to mount than the GoPro or iSAW camera ranges.

The decent range of features, resolutions and frame rates give you plenty of scope for adjustment and the resulting footage is of a good overall quality. The app is clean and easy to use enabling control over the operation and settings for the camera. Some of the more unique features such as Motion detection and Cycle Recording are handy additions and work well. The screen on the back is as good as any that I’ve seen on an action camera and a real positive addition.

Case size and design was a real issue during testing as it was a constant battle to keep the lens clean and clear. A slight alteration in the design would make a big difference.

If you’re looking for a family action camera then the SJ5000X is a good choice. It’s packed with features and these are backed by a sensor and lens that are more than capable of capturing decent quality video. With scope for adjusting video resolution and frame rates from 4K at 24fps to VGA at 240 fps, you have plenty of options for creative shooting.

As the overall design follows that of the tried and tested GoPro, albeit just a touch larger, almost all GoPro mounts will automatically work without modification. This means that you can attach the camera to almost anything without too much effort.

But if you’re looking to do some serious sports, that slight increase in size over the GoPro Hero cameras is noticeable. And if you do decide to take the SJ5000X out on the trial then make sure you go equipped with a lens cleaning cloth as the corner of your jumper is not an acceptable substitute.