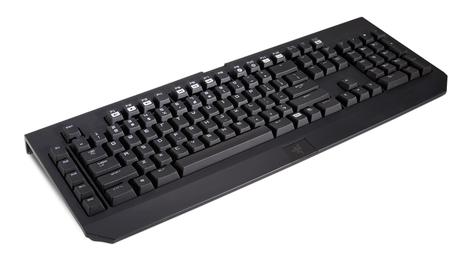 Over the years we’ve had rather a love/hate relationship with Razer peripherals. We’ve always struggled with the Cult of Razer’s gaming mice, either the way they bent our fingers out of shape or demanded obscene amounts of cash for a wireless mouse with an extravagant box design.

But their keyboards are really starting to bring us around to the Cult’s way of thinking – that said, the Black Widow Ultimate is sitting somewhere between love and hate.

Last month we got all giddy over the DeathStalker Ultimate, a beautifully-built keyboard with an excellent little trackpad/touchscreen in place of the numpad. It was a little buggy, but was so technically pleasing we couldn’t help but fall in love with it a bit.

Still, the price was daunting and it was using some rather dead-feeling membrane switch key technology instead of the mechanical switch tech we prefer.

The Black Widow Ultimate should be a bit more up our street then, coming in at half the price of the DeathStalker and packing some swanky mechanical switch keys to boot.

Sadly this is much more of a standard keyboard, so no fancy touchscreen shenanigans here. All you get as gaming extras are the five macro keys, individual LED backlighting and the ability to shut off the [Windows] key.

It does, however, feel much more sturdily built than the relatively lightweight DeathStalker. There is no flex to the keyboard’s chassis, built as it is from plastic thicker than a professional footballer.

Despite the rather garish Razer-green backlight (it can be dialled back to a low level using the function keys), the actual design of the Black Widow is relatively subtle and clean. The way the indicator lights appear, as if from nowhere, above the numpad is particularly neat.

But we’re not entirely taken with the mechanical switch keys Razer has used on the Black Widow Ultimate. Most of the other mech-switch boards we’ve used over the last six months have been of a similar ilk, but this almost feels like the micro-switched joysticks we used to plug into our Amigas. It’s far louder than any other board we’ve used, which would be annoying if we weren’t using a headset – they also feel a little strange in the key action too.

That said they are very responsive and survived our particularly rigorous Trials 2 testing methodology, though our review sample had a particular issue when we were typing which doubled up my [N] key on occasion.

When you’re spending £120 on a keyboard you don’t want it to annoy you, and that’s one of my problems with the Black Widow Ultimate. We actually like its simple design, and if Razer had used different switches on the keys we probably would be weighing it up rather more favourably compared with the still-excellent Gigabyte Aivia Osmium.

But as it is the Black Widow Ultimate can’t compete with the cheaper, more fully-featured and functional Gigabyte keyboard. So while it’s a very solid and responsive keyboard, it’s not one we could recommend, especially not for well over £100.