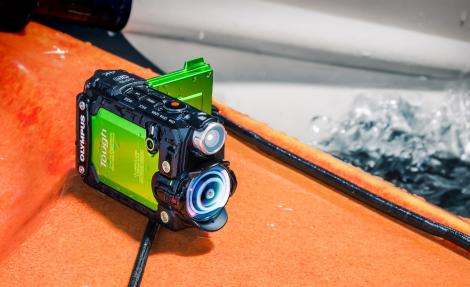 The TG-Tracker is Olympus’s first venture into the action camera market, and its camcorder-like design stands in stark contrast to the usual box design favoured by market leaders GoPro and the majority of other action camera makers.

Olympus is by no means new to rugged cameras, however, with an existing range of ‘Tough’ compacts. These are fully waterproof and shockproof, so it’s no surprise that the small TG-Tracker shares similar design traits, the Tough branding and a bright green colour option in addition to black.

The Olympus TG-Tracker stands out visually, and follows the styling of the company’s Tough compact camera range. I tested the striking green version, but a black version is also available.

This extra weight can cause a bit of additional wobble and vibration when the camera is mounted on bike handlebars or similar. Helpfully the built-in image stabilizer can be enabled via the menu system, and does a good job of reducing, although not totally eliminating, vibrations.

A small LED lamp can be used for illumination when filming in the dark, a feature not seen on an action camera before.

Unlike the GoPro Hero4 Black, which requires a separate waterproof housing, the TG-Tracker (like the Virb XE and Bandit) is waterproof out of the box to 30m.

All the TG-Tracker’s buttons and ports are fully sealed, with access to the battery, microSD slot, and USB and HDMI ports via a lockable hinged door on the back of the camera.

As with the rest of Olympus’s Tough range the camera has been built to withstand abuse. In addition to being waterproof it can operate in temperatures down to -10, survive being dropped from up to 2.1m, and is crush-proof up to 100kg – so you don’t have to worry about accidentally sitting on it.

The small camera packs headline features including built-in Wi-Fi, GPS, motion sensors and 4K video capability. It looks like Olympus is serious about making an impact in a market that has recently seen a slowdown in innovation.

The TG-Tracker features five field sensors: GPS, compass, acceleration sensor, barometer and thermometer. These make it a serious rival to the Garmin Virb XE and TomTom Bandit, both of which are equipped with motion sensors and GPS, and are available at a similar price.

Inside the TG-Tracker is a 7.2 million pixel, 1/2.3-inch CMOS sensor, which is fronted by an ultra-wide – even in action camera terms – 204-degree angle of view lens.

In addition to 4K at 30fps it’s possible to record at other resolutions, including 1080p and 720p at 60fps and 30fps. There’s also a high-speed recording option, which enables frame rates at 720p and 480p to be increased to 240fps, which will enable slow motion playback once edited.

Stills can also be captured at 8 million pixels, and all footage is captured on a microSD card that slots into the back of the camera.

The TG-Tracker will appeal to those involved with distance and speed sports, such as skiers, mountain bikers and orienteers, and also to families, with the compact camcorder-like design, flip-out screen, direct-access menus and intuitive controls making it easy to use.

The camera is comfortable to use, with the flip-out screen making handheld filming very easy; however the screen merely flips out, rather than flipping and rotating.

The TG-Tracker comes supplied with a series of accessories, including a steady grip that bolts onto the bottom of the body, giving it an almost Super 8 cine camera look and feel.

All the settings and controls are accessed via four of the five buttons on top of the body; the fifth button is the shutter button, which is mounted conveniently forward of the others.

Menus are activated with the Menu button, the forward and back buttons make navigating through the options extremely easy, and the OK button is used to confirm selections.

The position of the buttons makes them easy to reach, and the layout is intuitive – in fact it’s the easiest action camera to operate that I’ve come across.

The screen is bright and easy to view in all conditions, with the live view giving you a good overall impression of the colour and exposure of captured footage.

The companion OI.Track app is quick and easy to set up, although at present it’s only available for Android devices. Once connected, video, along with the log files, can be downloaded to your mobile device and viewed alongside any sensor data recorded.

At present the app really only enables the viewing and sharing of footage, and doesn’t enable overlays, as with the Garmin app, or any auto-editing features, as with the TomTom Bandit app. The app and software have a long way to go before they’re as fully featured as the competition.

Mounting is an important factor with action cameras, and Olympus has clearly taken this on board. The aforementioned steady grip, when attached, makes the camera easy to hand-hold, while the included mount coupling makes it easy to attach the TG-Tracker to almost anything, including a standard GoPro mount. Both are attached via a standard 1/4-inch thread on the base of the camera.

The TG-Tracker’s 30fps, 4K video footage is well balanced for exposure, with plenty of fine detail visible. Contrast is a little high, and as with the majority of action cameras it struggles with dynamic range, losing some shadow and highlight detail in high-contrast situations.

When you’re filming while moving between bright and shaded areas, however, the exposure adjusts quickly, and the auto white balance works well; unusually the TG-Tracker manages to adjust both exposure and colour balance at the same time.

Dropping the resolution down to 1080p at 30fps results in well balanced footage with a good amount of detail. Shooting at 60fps captures smooth motion, but a the cost of a slight drop in the quality of the detail and tonal rendition when compared with footage shot at 30fps.

The 204-degree angle of view lens captures a very distinctive fish-eye perspective, even more so than that of the GoPro. Footage is sharp at the center of the frame, but as you’d expect the sharpness falls off considerably towards the edges, and there are signs of blue chromatic aberration.

The lens is protected by a domed filter which can be removed and replaced if the filter is broken, or if additional filter options become available in the future. In bright conditions the lens can introduce slight flare at the edges of the frame, but this generally isn’t noticeable.

The TG-Tracker has two recording modes: On and Log. The On setting captures just footage, while selecting Log activates the sensors, to capture GPS and other data. The data from the sensors can be viewed on the screen during playback, or in the OI.Track app. It’s worth noting that Log mode drains the battery much more quickly than the standard recording mode.

The Olympus TG-Tracker is a break from the usual box style of action camera, and the design and feature set make it very appealing. The shooting specs are impressive too, with the 4K video recording at 30fps enabling you to capture high-quality footage to set the scene, then 1080p at 60fps to capture the action. The option to shoot 720p at 240fps is also a huge benefit for those wanting to capture action sports in slow motion.

Image quality is good and stands well against the likes of the Olfi, Garmin Virb XE and TomTom Bandit. However the GoPro Hero4 Black still has the edge when it comes to absolute quality of footage.

Capturing location and motion data through the five sensors is a huge selling point, and matches the abilities of the Virb XE and Bandit.

However, at present the integration of this data capture with the app and software doesn’t feel like it has been fully realised – the Virb XE enables the overlay of the data on the footage and integration with Garmin heart monitors and other compatible gear, while the Bandit has the overlays and the shake to edit feature. At present the TG-Tracker’s app is only able to display the data alongside the footage.

But at least the hardware is in place, and hopefully the software will be updated to make full use of its capabilities.

The TG-Tracker is easier and more intuitive to use handheld than any other action camera presently on the market, with the flip-out screen making it easy to compose shots and view settings information, and the button layout making it simple to adjust settings. Connecting and using the app, and data capture, are also easy.

The inclusion of the GoPro mount adapter opens up almost endless mounting options, and the use of a standard 1/4-inch thread will be welcomed by photographers, as it enables the camera to fit any tripod without the need for an adapter.

The larger size and weight compared with the GoPro can be an issue when mounting the TG-Tracker in some positions. The flip-out screen is an asset, but the inability to rotate it once flipped is a niggling issue – it’s the first thing anyone tries to do once they’ve flipped a screen out.

At present it doesn’t feel like the software and app have been fully developed to take full advantage of the camera’s sensors.

For all-round features and performance, the Olympus TG-Tracker is ahead of all other action cameras that are currently available. The tough design, waterproofing, small screen, button layout and included Steady Grip make it exceptionally easy to use, and a great choice for families as well as action cam enthusiasts.

The addition of multiple sensors, and 4K and 1080P video recording options, will also appeal to those taking part in extreme sports who want a single device to capture both data and visuals.

The TG-Tracker’s price puts it in direct competition with the TomTom Bandit and Garmin Virb XE – and it’s a pretty even battle, with each camera having advantages in particular areas.

If you want a rugged, easy-to-use action camera for recording family days out, the TG-Tracker is unbeatable when it comes to ease of use. The TomTom Bandit leads for auto-editing features, while the Virb XE has the edge if you’re out on the trail and want a camera that’s compatible with Garmin fitness devices.