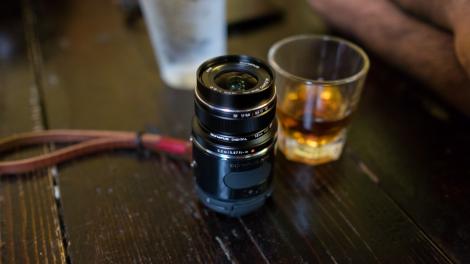 Cameras, as we once knew them, have changed. In just a few years, the popularity of point-and-shoot cameras has given way to smartphones. Similarly, mirrorless cameras are rising in adoption over DSLRs. Soon, the next advent could be Lens Cameras, pioneered by Sony’s QX line.

Now, Olympus has introduced its own smartphone-powered entry: the A01 Air.

The Olympus Air might look like an unassuming cylinder no bigger than a can of Red Bull. But really, it’s a miniature camera complete with a 16-megapixel (MP), Micro Four Thirds (MFT) sensor and a mount to attach lenses to.

The only thing the shooter lacks is a screen. That’s where your smartphone comes in, acting as both a remote control and display for composition.

The Air certainly earns it name when compared to the heavier the 0.7-pound (216g) Sony QX1. Olympus’s lens camera solution is also smaller, thanks to being a perfect cylinder and packing a smaller sensor. The QX1 is a bulkier device, with little offshoots on its puck-shaped body including a pop up flash that bring its overall dimensions up to 2.76 x 2.09 x 2.91 inches (70 x 53 x 74mm).

While this is great for the Air’s portability, it doesn’t feel like the world’s most balanced camera, with half of Olympus’s lenses being larger and weighing more than the Air. This is especially apparent when the camera rig tips forward when I have a large lens, like the Olympus 12-40mm f2.8 Pro, attached to the front.

The Olympus Air is similarly light when it comes to onboard controls. Along the top, you’ll find a small power button as well as a large oval shaped shutter release, which makes it easy to snap a photo regardless of how you’re holding this mini camera.

On the sides, you’ll find two switches; one toward the front keeps your lens locked in place, while the one at the rear secures the smartphone clip. You’ll use this fold-down clip to attach mobile devices as large as the iPhone 6S Plus and Nexus 6.

Unlike the Sony QX1, the Olympus Air clips your smartphone in place at a diagonal that makes it much more usable for low and high-angle shots. Remove the mobile device mount and you’ll find an additional switch to turn off the device’s Bluetooth and Wi-Fi in addition to the micro USB charging port.

Unfortunately, you have to peel off yet another plastic cover before you can actually get to the microSD card. While most photographers will be annoyed with all the steps to get to the memory card, not to mention the lack of control dials and programmable shortcut buttons, you’ll primarily use the Air through the accompanying OA Central app available on iOS and Android.

Connectivity and the app interface

An iOS or Android phone is essential for using the Olympus Air. Sure, you can go around shooting blindly, but you’ll need the companion smartphone to access the full range of shooting modes, tweaks to camera settings and to see what you’re actually capturing.

Luckily, Olympus has streamlined the process by integrating NFC into the Air lens camera. Alternatively, you can scan a QR code located on the back to quickly setup a Bluetooth and Wi-Fi connection. Once the devices are paired, you can start up the camera entirely from the app and get to shooting in a few taps.

For the most part, you’ll gravitate primarily towards the “Mode Dial” portion of the app, which starts up the camera and lets you get to taking images. From there, the interface is very much like a beefed up iPhone or Android camera app, with a large shutter button at the bottom of the screen.

On the opposite end of the spectrum, being built for pro photographers, novices can comfortably use this lens camera on automatic modes. Olympus has also implemented an OA Genius function that automatically edits your photos.

The smartphone app essentially takes your original photo and produces six deviations by adjusting exposure and color levels, adding photo filters and cropping the image in creative ways. Users can then choose a version of the image works for them – or just choose the one they originally shot – and the OA Central app will begin to remember your preference.

Whether you’re an amateur just getting their feet wet or a veteran photographer who’s interested in pushing this camera to its limits, the OA Central is a versatile app that backs up this powerful, pocket camera. But while the app is great, I wish the wireless connection between the Air and smartphone was a bit more reliable – but I’m getting ahead of myself.

While this means you’ll easily get sharp and colorful images, it also means pushing the ISO sensitivity above and beyond the 1,600 mark is just asking for trouble. Unlike the OMD E-M5 II and OMD E-M10 II, the Air does not suppress noise as well. Expect to run into other color issues when trying to take photos in dimly lit environments.

What’s more, the Air A01 isn’t equipped with any of Olympus’s sensor-based image stabilization technology. That makes it that much harder to shoot a steady image in the dark without the aid of a tripod or monopod. Olympus says its lens camera will digitally suppress camera shake, but it’s a poor substitute for optical image stabilization, or OIS.

Given the small stature of the Olympus Air, battery life isn’t great either. Olympus claims you should expect to get about 320 photos out of a full charge. With real world usage, the Air allows me to shoot for several hours, but it almost always flops over after about half a day. However, with USB charging, at least the thing can be charged on the go – if you have a portable USB battery.

Shortcomings aside, I am thoroughly impressed with the quality of images I can take with this pocket camera. They are just as sharp as the photos I produce with my Olympus OMD E-M5 Mark II and doing everything from a smartphone makes it that much faster to go from taking a shot to editing and posting it online.

I’ve fallen in love with the sheer flexibility the Olympus Air A01. Because I don’t need to look at a screen attached to the camera, I point the device at all odd angles to capture new perspectives. It’s liberating not to have to be chained to an electronic or optical viewfinder. While articulating LCDs offer some amount of freedom when composing a shot, you can be that much more creative when you’re holding the camera in one hand and the screen in the other.

I find it invaluable for public street shooting, which can be an intrusive form of photography for your unwitting subjects. The only ways to get around the problem is either by just being quicker on the draw or just shooting intuitively with zone-focusing.

With the Air in hand, however, I was able to casually stand right next to a person (in a public space, of course) and take their photo while pretending to look at my smartphone. It’s a bit craftier than pointing a camera directly at someone’s face, but having a smaller camera makes street photography less threatening. For this reason the Air is one of the least intrusive cameras you can tote around.

Unfortunately, the most annoying thing about the Air is how often it drops connection with your smartphone. Whenever this happens, the camera app’s live view stops on a freeze frame, preventing me from seeing what I am shooting. Worse yet, I can’t access any of the controls, including triggering the shutter. Thankfully, this issue doesn’t lock up the camera, so I can still blindly fire off the shutter and hopefully catch the shot.

It’s a pervasive problem that almost always happens at the most inopportune times while I’m out street shooting. As far as I can tell, it’s an issue that crops up no matter whether I’m outside on the street, in a park or in an office building congested with wireless signals. Worse yet, I simply could not get the app and camera to connect while using the Olympus Air A01 with a Motorola Moto X (2014).

The coolest bit about the Air is its ability to beam what it sees to your smartphone. When that feature frequently fails, it frankly renders the entire point of the device moot.

In the future, I hope Olympus will be able to improve the reliability of its lens camera’s Wi-Fi and Bluetooth connection. In the meantime, it’s simply too unreliable, so prepare to fire off the camera blindly at times.

The Olympus Air A01 is unlikely to replace your dedicated camera. It’s much more likely to interest those who are looking for a smaller companion shooter to go with their more serious DSLR or mirrorless camera, or something to seriously up their smartphone photography game. Compared to just about any smartphone camera, the Air resolves more detail, fuller colors, deeper shadows and generally better dynamic range.

You won’t likely be using this lens camera in a studio environment, however, this camera will up your photography game with better food photos, landscapes, group selfies and just about any picture you would normally take with a smartphone. Don’t forget about the extra flexibility, either. Because you can point the camera without having to look at the display, you can use the Air to take images from all sorts of new perspectives.

The Air A01 isn’t breaking any new ground that the Sony QX1 has already treaded on, but I feel like Olympus has delivered with a stronger solution. The camera is physically smaller, making it easier to slip into your bag.

At the same time, Olympus has developed a beginner-friendly app that automatically edits and cuts your photo into multiple styles. Then there’s also the matter of the Micro Four Thirds world having a much larger catalog of lenses from Olympus and Panasonic.

Of course, the best thing about the Olympus Air is how you can shoot it completely independent of seeing what it does. Thanks to the constantly beaming live-view footage to your smartphone, you can hold up the camera at all sorts of angles you might have never thought of or thought possible, even with an articulating screen.

The usefulness of the Olympus Air lives and dies with the smartphone app. But after having the whole setup freeze on me so many times, it’s frustratingly unreliable as is.

The ability to control a camera completely from your smartphone offers more creative freedom, but it’s still nowhere nearly as fast as putting a real camera up to your eye and pressing the shutter button.

A few years ago, lens cameras seemed like a strange fad. But with more Wi-Fi-connected cameras cropping up from the Sony QX1 to HTC Re, it’s beginning to make sense. A camera that you can use completely independent of your line of sight opens up a whole new world of photographic possibilities.

If you’re already invested in Olympus’s lens family, $299 (about £195, AU$423) isn’t a bad way to spend your money for a compact secondary camera. It’s far cheaper than the rest of Olympus’s compact system camera lineup, and it will work with any MFT lens while delivering surprisingly sharp and colorful photos despite the incredibly tiny size of the device.

Knowing the app falls into sporadic fits when connection problems arise, the Olympus Air is a fun little device that I hope only gets better with future firmware updates. This could very well be the future of photography, but it needs a little more time in the dark room.