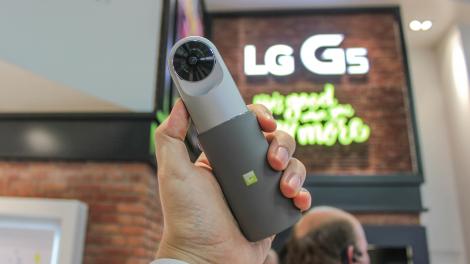 The LG 360 Cam is a pocketable VR camera that’s ready to change how complicated it is to record virtual reality videos and photos.

It pairs two 13MP camera lenses on a stick, and each one is capable of capturing 200-degree wide angle photos and videos, then merging them together as one.

The stitching technology behind creating a seamless virtual reality world is sophisticated, but the user experience of this 360 camera remained fairly simple when Wi-Fi worked at MWC 2016.

It plays nicely with the forthcoming LG G5 and LG 360 VR, making it the South Korean firm’s VR capturing counterweight to the Samsung Gear 360 camera.

What’s great about the LG 360 Cam is it’s incredibly compact and lightweight for all of the heavy lifting that it does. I felt like I had the key to finally making virtual reality happen, all in the palm of my hand.

It’s shaped like one of those FlipCams from a decade ago, but it’s actually a little bit smaller at 30 x 97 x 25mm. That makes its dimensions closer to your average voice recorder.

It has style as well as size on its side. I liked the two-toned, polished metal look of the LG 360 Cam, though it’s really just plastic through and through, with a rubberized frame and power button.

The dark gray-colored power button is small, but important since it doubles as a way to toggle between 360 and 180 degree photos with a long press.

The record button is even more essential, so I was glad to see that it’s bigger and resides on the front of the camera, right below one of the fisheye lenses. It’s easy to access for quick captures.

Incredibly, the two fisheye lenses are flush with the body of the camera, and yet are able to soak in 200-degree wide photos and videos. This may be LG’s biggest advantage over the more bulbose Samsung Gear 360.

The LG 360 Cam also has a protective plastic cap in dark gray. This shields its delicate glass lenses so you can stick the camera in a pocket or bag without stressing. I do worry about the delicacy of the spherical Samsung Gear 360, which doesn’t have this plastic peace of mind.

The cap is smartly engineered to securely clip to the camera base, so you’re not loosely carrying it around. It also acts like a handle extension tro grip. The entire ensemble measures 98.5 x 43.4 x 29.8mm and weighs 97g, which is still fairly small and light.

The bottom of the LG 360 Cam has a standard 1/4-inch tripod thread so that you can mount it on most tripods. Not visible is a trap door for a microSD card and USB-C charging.

There’s a lot going on inside the LG 360 Cam in order to capture more than three times what the human eye can see.

LG is touting the its two 200-degree wide angle 13MP cameras, and the fact that they’re backed up by a long-lasting 1,200mAh battery. It’s squeezed in between the two back-to-back lenses.

Yes, the battery capacity is smaller than the 2,800mAh LG G5 battery, but remember: this isn’t a phone and there’s no power-draining screen, or plethora of apps here. It should last you just as long as your phone, with 70 minutes of continuous video recording.

My only concern is that the battery isn’t user-replaceable. The bottom of the camera has two visible screws, but this doesn’t mean it’s swappable like we’ve seen on the Samsung Gear 360.

The LG Cam 360 has its chief competition beat when it comes to storage, however. Included in its tiny body is 4GB of internal memory, in addition to accepting microSD cards.

That’s a big deal for me. I can’t tell you how many times I’ve left an SD card in my computer to transfer photos, then tried to use my DSLR camera the next day, only to realize there’s no SD card in there.

Its 4GB of space is basically a fail safe for people who pop out that microSD card on a regular basis. It’ll be able to save at least some video and lots of photos in those desperate situations.

LG Cam 360 doesn’t have a microphone or headphone jack, so you won’t be able to intimately narrate 2K video using this VR camera. But its embedded mics are able to pick up surrounding audio.

There are three microphones tucked into the edges of the camera lenses. It’s hard to see them, and was harder to test out at noisy MWC, but they’re here and poised to pick up 5.1 surround sound.

The LG 360 Cam app should look familiar because it’s essentially a variant of the LG G4 and LG G5 camera app, but one that’s designed with VR camera controls in mind.

Physical buttons are at a minimum on this VR camera, so it’s essential that you load up this app and connect the phone with Bluetooth and Wi-Fi to take advantage of manual controls.

In addition to seeing and scrolling through a live 360-degree preview image, I was able to manually adjust the shutter speed, ISO and white balance outside of the plebeian Auto mode.

Toggling between the 360 and 180 degree camera, and flipping the latter camera around, is all possible here, too.

I’m really looking forward to using this companion app’s timer button. It makes for an easy way to tap the shutter button and sprint off to appear somewhere in the 360-degree photo.

Of course, taking advantage of all of these controls required pairing the LG 360 Cam and LG G5 with Wi-Fi and Bluetooth, and that was a special kind of complicated at the signal-busy MWC. When there aren’t a dozen other devices in range, LG’s Friends app promises to make the connection easier.

I’ll have to wait to judge it on this, but it’s going to be key to the success of this VR camera. When everything does work, you’ll be able to view photos and videos on more than just the LG G5 and and LG 360 VR that I tested. There’s also support for Google Streetview and YouTube 360 coming to the 360 Cam.

LG made a point of saying that images will also be available on other smartphones capable of 360-degree content, so we’ll have to see if it plays nicely with rivals as well as it’s supposed to play with friends.

The LG 360 Cam has a tremendous amount of potential because it’s a virtual reality capturing tool fit for your pocket. It’s smaller than the Samsung Gear 360 and, judging from my hands-on time, the dual 13MP camera seems almost as capable. In fact, the size, internal storage and protective cap make it a better VR travel companion.

LG doesn’t have the same inviting VR ecosystem as Samsung and its Gear VR platform, and that may end up being a reason enough to stick with LG’s South Korean competitor. But if it nails compatibility, connectivity and price, the LG 360 Cam may be a virtual world changer.