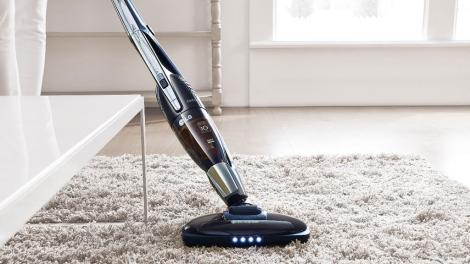 While it’s safe to say that Dyson has revolutionised the cordless vacuum cleaner space in recent years, there is still plenty of room for alternative options in this booming market, especially if those alternatives provide a different experience and sport a more affordable price tag ($449) than what Dyson’s products are currently selling for.

Introducing LG’s CordZero Handstick Vacuum, an attractive 2-in-1 vacuum solution that combines impressive functionality with clever design to give you more bang for your buck.

Having trouble deciding between a dustbuster and a traditional handstick vacuum? Well, the LG CordZero Handstick is both, which is perfect for people who find it impossible to make decisions.

You can take the CordZero Handstick and transform it into whatever you need it to be at any given time. It’s that adjustability of form that allows LG’s CordZero Handstick to leave many competing vacuum cleaners in its dust (if it actually left any behind to begin with).

The LG CordZero Handstick Vacuum is somewhat unassuming at first glance. Take a quick look at it, and you might disregard it as a completely typical vacuum – kinda like a bagless version of one of those old vacuums you see in 1950s movies (albeit more attractive).

It’s only once you’ve taken a closer look at the device that you start to appreciate the genius of its design.

During your assemblage of the CordZero Handstick Vacuum, you’ll notice that it comes with two yellow battery packs.

This dual ‘PowerPack’ battery system gives you a total of around an hour of suction time on ‘regular mode’, or around 40 minutes on the stronger ‘power mode’.

Your spare battery pack sits in the Handstick’s accompanying stand and charging dock so that you can easily switch your vacuum’s battery out when it has run out of juice.

This gives the CordZero Handstick twice the battery life of a competing Dyson device, eliminating the need to stop and wait several hours for your vacuum to charge up again.

Once you’ve finished your vacuuming duties, you can simply drop the CordZero on its charging stand and restore power to both battery packs simultaneously.

As mentioned previously, the CordZero Handstick is a transforming device, allowing you to detach the ‘stick’ part of this vacuum and turn it into a hand-held dustbuster-style handy vacuum with the press of a button.

In this form, you can use the vacuum to clean inside cars and other confined areas. Quick-spot cleaning is also possible with the inclusion of a built-in brush extender that can flipped-out from underneath the vacuum with ease.

Once you’re done using the CordZero in handy vacuum mode, you can simply click it back onto its stick body.

The CordZero Handstick also features a 180-degree swivel head with a set of LED lights on the front of it so that you can see better in dark areas, like under beds.

And, speaking of LED, the device has an LED battery indicator right below its power button, so you can clearly see how much power the CordZero has left.

It also boasts an Anti-Tangle Brush which should come in handy if you find yourself cleaning up pet hair and shaggy carpets regularly.

In our time using the CordZero, we did not experience a single instance of brush blockage – something that has occurred with high frequency on some of the Dyson units we’ve used in the past.

The CordZero Handstick produces a decent amount of suction for what is essential a fancy dustbuster sitting in a handstick frame.

Dirt, crumbs, torn-up tissues were lifted with ease when used around an office environment, and we rarely had to roll over the same area multiple times.

It won’t be picking up bowling balls any time soon, but for everyday dirt, dust and other floor junk, the CordZero Handstick is more than up to the task.

It’s 180-degree swivel head gives the vacuum a fair amount of maneuverability, allowing you to turn on a dime (which you may literally have to do from time to time) and around corners without much struggle.

The roller itself performs well on bare surfaces though it will take a little more effort to push it around on carpeted areas.

One thing we noticed in our extensive use of the device is that the CordZero Handstick works best when held on an angle.

It’s quite easy to push the vacuum back and forth when held at a 70-degree angle or below, though bringing it up an almost standing position tends to leave it stuck in place, meaning you’ll have to lean the handle back to push it forward again.

It’s a minor gripe that can be avoided entirely once you’ve gotten used to using it at the intended angle, but it did feel unpleasant on those occasions where we brought it up too high and got stopped dead in our tracks.

In our experience, we found that 40 minutes was more than enough time to complete our vacuum duties, allowing us to use the CordZero Handstick at in power mode for the entire duration of its use.

That’s not to say that regular mode is a slouch, either, but then who doesn’t want to harness all the suction power that’s available to them?

LG’s latest cordless vacuum is both functional and quite attractive to boot. Its modular, lightweight design allows you to use it as a traditional handstick vacuum or as a hand-held dustbuster-style vacuum with the press of a single button, which is as clever as it is handy.

We also appreciate the dual battery PowerPack system that allows us to easily swap out power sources, giving it twice the suction time of its cordless competitors.

Though its head can get stuck in place when pulled back too far, and it’s a little tougher to push around on carpeted surfaces, its 180-degree swivel design adds a great deal of maneuverability to this vacuum.

We also love its tangle-free roller head, which in our tests did not get jammed once.

If you’re looking for an affordable all-rounder of a vacuum that’s free of cords with better than normal battery life, LG’s CordZero Handstick is easy to recommend.