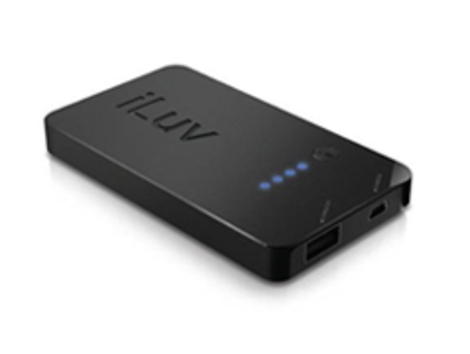 We’ve all been there – you’re away from a power supply but need to make or receive an important phone call and the battery dies. It seems like the more complex smartphones get, the shorter their battery life is. The iLuv iBA200 portable USB rechargeable battery kit attempts to help fix or avoid these situations.

By charging it up beforehand you can carry it around, and when your smartphone, digital camera, PDA, MP3 player or other device that charges via USB loses its battery, you can quickly attached it to the device for an extra boost. We got an extra four hours of talk time out of our dying iPhone.

It works well, being compatible with major smartphone brands and handsets including the Apple iPhone 4, BlackBerry Torch, HTC Sensation and Samsung Galaxy S2, MP3 players including the iPod touch, cameras and more. For getting out of sticky situations it really can be a life-saver. Annoyingly, it doesn’t come with a mains adapter – so you have to charge it via a computer’s USB port, which takes some time.

A simple LED indicator kept us informed of how much battery life was left – although when we first used it we didn’t know how long three LEDs is, compared to four LEDs.

It’s a simple countdown that will at least let you know that it holds some charge, and the more you use the iLuv iBA200 charger the better you’ll get at knowing how much time you have left when there’s only one LED lit up.