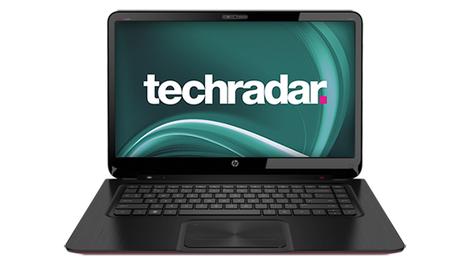 AMD is enjoying something of a resurgence in its laptop fortunes lately. The HP Envy Sleekbook 6-1126sa is the second computer we’ve seen recently that employs the ‘other’ manufacturer’s processor, the other being the Samsung Series 5 NP535U3C-A02UK.

The question is, despite these design wins, can AMD hold its own against intel’s third generation Core processors that seem to dominate the laptop space? And if it can, why aren’t we seeing more of its mobile processors in the wild?

The first question isn’t so easily answered, simply because Intel doesn’t quite have a processor in the same price bracket as the CPU that can be found inside this machine. In fact it is more than a CPU, but we’ll come back to that shortly. 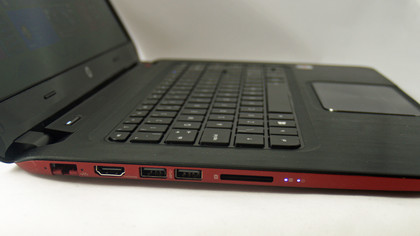 The point is, the HP Envy Sleekbook 6-1126sa is priced at budget levels, £500 (around US$790/AU$757) at launch, but on the face of it, it hasn’t had to cut all of those traditional corners in order to achieve that price.

In fact, at a quick glance it appears to be more of the Ultrabook school of thought, rather than something born out of a manufacturer trying to shift as many boxes as possible.

Key to the HP Envy Sleekbook, and the fact that it has managed to hit that price tag, is the AMD APU that can be found at its heart. AMD has termed such chips APUs, which is short for Accelerated Processing Unit, because they offer more than the traditional CPUs (Central Processing Units) name would suggest, mainly in that they also pack a GPU (Graphics Processing Unit) into the same packaging. 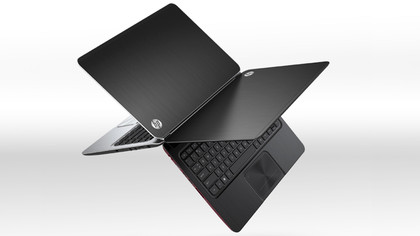 You could argue that there’s nothing particularly new here, since Intel’s chips have boasted graphics capabilities for a couple of generations now.

To be fair to AMD, though, the term CPU doesn’t really cover such capabilities, plus this graphics core should in theory pack a much greater punch than Intel’s CPUs, since AMD is as well known for its graphics business as it is for its processors.

Back to the laptop in question – here is a machine packing a new APU from AMD, in a full-sized, yet sleek 15.6-inch form factor that boasts some impressive looks for its budget price tag. Surely some corners have had to be cut in order to achieve that affordability, and can it really deliver on its promise? 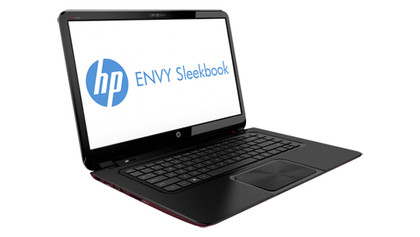 On the positive side, the HP Envy Sleekbook 6-1126sa does a far better job of handling media than a smaller, more nimble laptop might. And this is something that HP has picked up on, giving the system the Beats Audio treatment, or in other words installing a pair of speakers and a subwoofer into the system’s tight frame.

We’re not entirely convinced that this takes the computer into a different realm of audio greatness, but it does a fine turn of giving impact to your movie soundtracks and music. 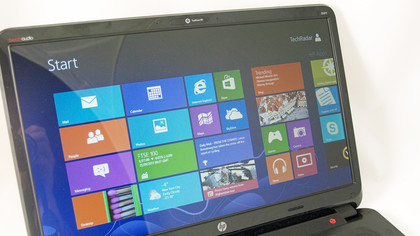 We’re not sure you’ll want to throw away your headphones quite yet, since laptops do tend to be used in more social locations, but it does give you options when watching films in private.

The rest of the specification hides no great surprises, neither particularly good nor bad. Alongside the aforementioned AMD A6-4455M APU you’ll find 4GB of DDR3 RAM, which is pretty much a bare minimum these days, and a 500GB traditional hard drive.

We’ll admit that having been won over by SSDs, particularly in laptops, it is difficult to go back to these slow platter spinners, but at this price the money that gets you the 500GB 5,400rpm drive here wouldn’t stretch to a fifth of that capacity in SSD terms. 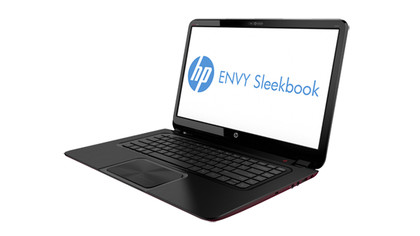 There are times when this lack of speed shows, particularly and unfortunately, when you first use the PC, but overall the amount of space on offer just about outweighs the lack of speed.

One of the reasons for using the AMD A6-A4455M APU is the access to the 7500G graphics core, which means you don’t need discrete graphics. 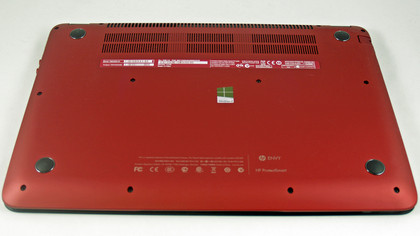 This doesn’t mean you’re missing out on the feature list front, though, with the HP Envy Sleekbook 6-1126sa managing to offer DirectX 11 support, as used by the latest games. And 512MB of video RAM gives plenty of space too.

There’s plenty on offer in terms of ports and expansion too, including HDMI, a single USB 2.0 port and two USB 3.0 ports.

You will of course find 802.11b/g/n Wi-Fi and Bluetooth support as standard, with a collapsable Gigabit Ethernet port providing faster wired access when you need it. 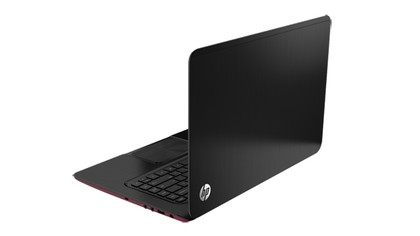 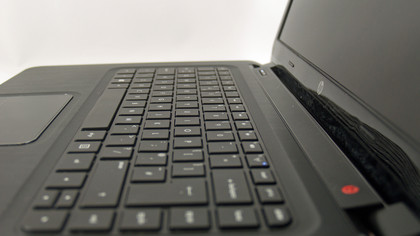 If this all sounds like the HP Envy Sleekbook 6-1126sa is shaping up to be the best machine ever built, then there is a small problem, and that is in the performance stakes. The finger of blame can be squarely pointed at AMD on this front, since while its A6-4455M APU may offer up a smorgasbord of features and capabilities, it doesn’t quite pack the punch that it needs to.

This is most clearly demonstrated in raw CPU performance tests, and here Cinebench 10 shows that AMD’s chip can’t compete with Intel’s Core i3.

The figures we garnered from this chip were a third of that from Intel’s CPU in the multi-threaded test, and while it’s a slightly unfair comparison because Intel’s Core i3 can handle four threads concurrently and the A6-4455M can only manage two, the single-threaded performance was just as uninspiring. 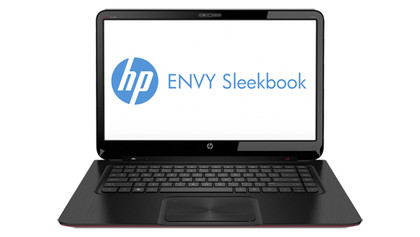 The raw processing power on offer isn’t great then, but it’s actually the gaming prowess of the machine that is the biggest hit for HP. Despite the promise of great things, there simply isn’t enough silicon on offer in the GPU core to handle the demands of modern games.

The synthetic benchmark, 3DMark06, had a result of 3,634. This indicates that it’s capable if you aren’t looking for anything too exacting, but when we turned to two recently released games, the HP Envy Sleekbook 6-1126sa really showed its colours.

Both Max Payne 3 and Sleeping Dogs can only be deemed unplayable, even when we dropped the settings to their lowest settings. Max Payne 3 in particular barely crept above 10fps, even with everything set as low as possible. This isn’t a gaming machine, regardless of how it’s pitched. 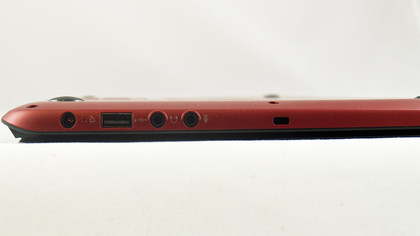 It’s not all bad, though. Actually using the machine for day-to-day tasks and enjoying movies is a positive experience, thanks in part to the roomy, responsive keyboard and large touchpad. HP has left off the number pad to accentuate this feeling of space still further, but it’s a cost that seems reasonable to pay.

The final matter of performance worth noting is the battery life, and unlike the Samsung Series 5 NP535U3C-A02UK, this PC doesn’t suffer from poor stamina.

Indeed it’s fairly impressive for a 15.6-inch laptop, racking up a decent 4 hours and 26 minutes of use when playing back video. You can expect even better battery life in less demanding tasks. 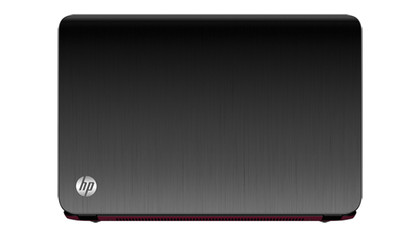 The HP Envy Sleekbook 6-1126sa is a laptop of contradictions. It looks like a expensive Ultrabook, but costs the same as a budget PC. The performance promises so much, but doesn’t quite deliver where it needs to. At the same time, it’s a great media machine yet, but one that boasts the stamina you would expect from a far more agile and sober laptop.

The styling of the Sleekbook is to be commended, since it looks like a far more expensive system than it actually is. The curving of the chassis hides the true thickness of the machine well, and given it isn’t that thick anyway, this only adds to the general air of svelteness.

The fact that you can enjoy a couple of movies without having to have it plugged in is also impressive, and despite its large form factor, that does mean that it makes for a good companion if you need a machine to travel with.

Best of all though, the fact that this computer costs just £500 (around US$790/AU$757) is impressive, and shows that AMD does indeed bring something worthwhile to the market. You can get cheaper machines running Intel chips, but they simply won’t look this good or be anywhere near this big.

The main problem with the HP Envy Sleekbook 6-1126sa is that it simply doesn’t have the raw processor performance or the gaming prowess that it promises.

Yes it supports the latest DirectX 11, which is used by the most recent games, but it doesn’t have enough raw grunt to actually render those games as playable frame rates.

The 5,400rpm traditional hard drive also slowed down the machine, and while 500GB does give you a lot of space for data, it’s a shame a small SSD can’t be installed alongside this for use as a system cache. It wouldn’t add much to the cost, but would make a notable difference to the speed.

Overall, despite the obvious performance anxiety that this machine suffers from, the HP Envy Sleekbook 6-1126sa is a system that anyone looking to buy a budget laptop should look at. Its large screen and decent audio subsystem make it great for enjoying music and movies, while the comfortable keyboard and strong battery life make it a joy to use for more mundane tasks.

Admittedly we would have preferred more raw power for our money, and the lack of real gaming performance does annoy, but in almost every other respect this is a tempting computer. It’s worth considering – or at least it is until Intel upsets the market once again when it release its next-generation processors, and their powerful graphics cores.