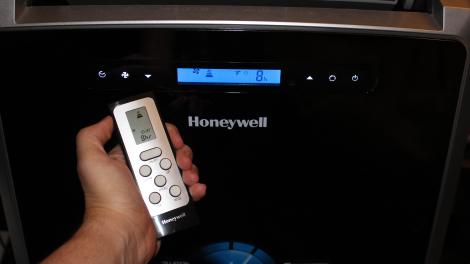 The Honeywell MM14CCS 14,000 BTU helps ease the common misconception that the hot, sunny weather in Los Angeles is always “nice,” thanks to this portable air conditioner’s cool high-tech breeze that comes at a reasonable price.

Because Southern California is pretty much warm year-round and not every building has central air conditioning or a window that fits a normal AC unit, my home computer is always cranking up the apartment heat index all day long. It can get roasting.

I’ve thought about buying a portable air conditioner every year since I moved here, but always wondered: are they worth the price? Or can I ride out the several scorching hot weeks again? The reviews out there are mostly inconclusive, often from shoppers with no clear consensus. 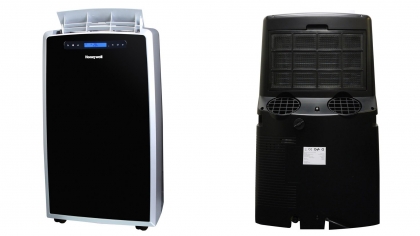 Testing out the Honeywell MM14CCS for an entire summer and into the still-too-hot fall, I was able to gauge just how good a portable air condition can be over the course of several weeks.

Here’s the 411 on this 14,000 BTU AC unit, which costs $549 at Amazon during Cyber Week deals this holiday season, edging out the rival Whynter Portable AC model.

The MM14CCS Portable Air Conditioner is Honeywell’s top-of-the-line unit that blasts out 14,000 British Thermal Units. That lets it cool a 550 square foot room in a matter of 30 minutes.

That’s enough for my office to drop ten degrees, from 85 to 75 degrees Fahrenheit, and it does a reasonable job in my larger front room when placed it out there, too. With all windows and doors closed, making the space smaller, it drops the temperature five degrees. 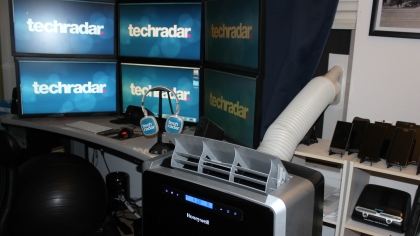 It’s been a pleasure to wake up in a bedroom and actually be too cold during heatwave and turn on the news and walk into another room only to realize the significant difference. That said, this isn’t a magical air conditioner that will cool your entire home. This isn’t a central air replacement.

Besides cooling, this particular model has dehumidification, up to 95 pints every 24 hours. It also uses an auto-evaporation system so that I didn’t have to drain water from it every few days. In fact, I haven’t had to drain the water more a few times over the course of my seven-week test.

During my Honeywell MM14CCS review testing I found it to deliver the promised powerful airflow and, for the most part, quiet operation of 55 dbA.

The one caveat is when the cooling turns on and off. The noise is abrupt if you’re just dozing off, which wouldn’t be that big of a deal once, except when the room temperature constantly hovers between that perfect temp and one degree higher, it can happen multiple times in an hour. That’s when it’s best to set that auto-off timer.

Along the front of the Honeywell MM14CCS is a long, blue digital LCD display that lets me transition my office from cool to cooler within a few minutes. There are capacitive buttons, which Honeywell calls its feather-touch buttons, and they’re backlit so it’s easy to see them in the dark. Don’t worry, that blue backlight turns off after a minute. 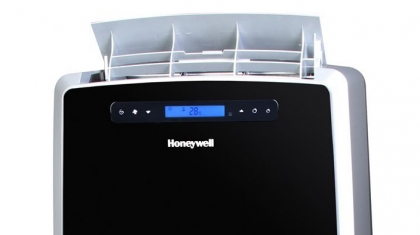 Setting for modes of “Cooling, Fan and Dehumidification” is fairly simple to navigate (once I read the instruction stickers to determine what the on-screen icons meant), and an included remote makes the task even easier to understand and operate.

The RF remote (which requires 2 AAA batteries) includes a display of its own, showing the current mode, fan speed, current room temperature in the room and an intuitive programmable 24-hour timer.

I did have to learn is that the current room temperature is the one constantly displayed. The desired temperature, on the other hand, is shown blinking only when cycling through the degrees with the up and down buttons. It soon reverts back to the room temperature, inching closer to that perfect number. 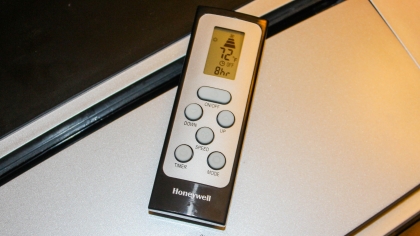 I appreciated this 5-inch remote, but it’s easy to lose, like my diminutive Apple TV remote, and I was really hoping that Honeywell MM14CCS would jump further into the Internet of Things world with a smartphone app.

Having my iPhone or Android phone set the temperature, mode and timer would have made the experience even better. To be fair, no portable air conditioner I’ve tried is up to “fan speed” on this development yet. However, I imagine this interconnectivity is coming in the next few years to future portable AC units.

The Honeywell MM14CCS 14,000 BTU design is what attracted me to this particular model. This two-toned black-and-silver tower has dimensions are smaller than its rivals, with measurements of 34″ x 19.92″ x 15.79″ and a weight of 73.85 lbs. The vent opens at the top, so it really requires 36 inches of height in the end.

That makes this portable air conditioner easy to stick into a small room, and it comes with four caster wheels at the bottom to cart around between rooms. It doesn’t take too much muscle to move the MM14CCS, so you won’t break a sweat while the AC is temporarily off.

What can complicate your positioning of the air conditioner is the flexible exhaust hose. Like all real portable air conditioners (not glorified cooling fans), it requires the hot air it sucks out of a room to go somewhere, like a window.

Like an accordion, there’s a single exhaust hose extends. It’s 5 inches in diameter and stretches up to almost 5 feet in length to reach a nearby window. It’s not the most eye-pleasing tube, but there’s a window venting kit that acts as a panel-like attachment that’s easy to install and sits in an slightly ajar window.

There’s no second intake hose included, instead relying on a built-in vent on the backside of the portable air conditioner. You can of course purchase a second hose for precise room cooling. That’s the one advantage of the Whynter 14,000 BTU Dual Hose Portable Air Conditioner, which has two hoses that stretch 60 inches.

Cooling is the primary job of the Honeywell MM14CCS 14,000 BTU, and it accomplishes without sweating the task. It consistently took my room temperature down ten degrees when asked and it doesn’t require much maintenance or space compared to other portable air conditioners.

It’s modern looking with a blue LCD display and capacitive buttons, and there’s a 5-inch remote control that extends all of the functionality to me while across the room. The best part is its size. Not all portable AC units are, well, portable. The wheels and dimensions make it a synch to set up in any home or small office room, and it’s cheaper than its competitors.

Honeywell made this air conditioner quiet, except when it transitions between cooling on and off. It’s only an issue in the dead of night if you’re using this while sleeping. It does such a good job getting to a specific temperature, then tries to keep it that way by turning on and off.

This is the best Honeywell air conditioner out there right now, but a more advanced unit adds one feature the MM14CCS: heating. The MM14CHCS adds a 12,000 BTU heat pump for $50 extra. Also, it lacks the lengthier dual hose system of the Whynter, which is also more expensive for what’s roughly the same specs and design. All portable air conditioners could use an upgrade with smartphone controls, in my opinion. 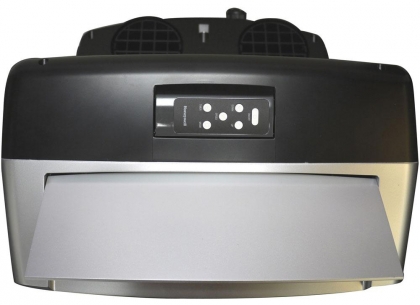 The Honeywell MM14CCS, at the powerful 14,000 BTU level, is the best portable air conditioner I have found for a relatively low price. It stops short of providing the dual hose attachment of the Whynter, but I found I didn’t need it. That lets this air conditioner come in at a cheaper price and it turns out to be a smaller size.

At 14,000 BTU, this Honeywell portable air conditioner, it cools, dehumidifies and acts as a fan. Sure, it’s easy to find an inexpensive fan that circulates air around a room, but this sucks in the hot air and literally sends it out the window where it belongs.