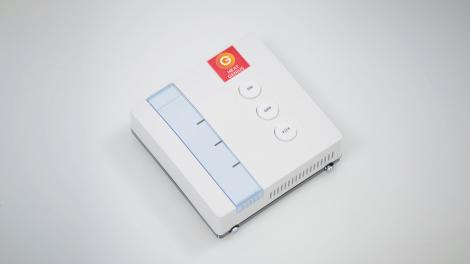 Smart heating systems are all the rage these days. Every home should have one. But it’s only when you start using something like Nest, Tado, Hive, Honeywell’s Evohome or Heat Genius for several months that you realise just how wasteful your old, dumb central heating can be.

A traditional heating system typically operates with a thermostat and a seven-day programmable timer. For each day, you’ll preset the times at which you want the heating to switch on and off, and specify the overall temperature you’d like your house to reach. The heating then cycles through this timed program, blindly following the settings whether anyone’s in the house or not.

A smart thermostat like Nest gives you more control. It learns and adapts to your occupancy schedule, adjusting your home’s heating accordingly, and it also enables you to wirelessly control your home’s temperature remotely. Staying out late? Nobody home? You can switch your heating off to save money using an app on your smartphone.

Designed and built in the UK, Heat Genius is a modular system that can be augmented to control your heating, hot water and even plug-in appliances/devices. At its heart, the basic £249 Genius Hub Kit consists of a Heat Genius boiler controller, wireless thermostat and the Genius Hub, a brick-sized plastic box that plugs into your broadband router.

If your boiler uses a standard backplate the boiler controllers can be swapped over fairly easily. If not (and mine wasn’t), you can get Heat Genius, or an electrician, to install it for you – this will obviously incur an extra cost.

Once the controller and the Hub have been installed, this basic setup enables you to set a timed seven-day heating schedule via a sky-blue web app on the Heat Genius website, or using the HG mobile app, which is available for iOS and Android devices.

The app enables you to specify a default temperature for your house, or add a series of Heating Periods and temperatures that suit your schedule – for example, switching the heating on in the morning, off when you go out to work, and back on again in the evening.

With the facility to quickly copy any Heating Period to another day and override any default timings to temporarily boost the temperature, programming and using the system via the app is almost effortless. Heating Periods are displayed in a graphical timeline, and you can view a handy chart that tracks the ‘Whole House’ temperature (as recorded by the wireless thermostat) day by day.

This may not sound very ‘smart’ so far. But Heat Genius starts to stand out from the clever-clogs heating crowd when you add ‘zoned’ and ‘smart’ heating functionality to it. This means investing in some extra kit – wireless thermostatic radiator valves (£59.99 each) to control individual radiators and wireless PIR (passive infrared) sensors (£34.99 each) to track occupancy.

It’s worth it – zoned heating is one of the system’s biggest draws. With most heating systems, smart or otherwise, your radiators are either all on or they’re all off; there’s no middle ground. So if you live in a three-bedroom house, but you don’t regularly use two of the bedrooms, you’re wasting money heating them. Add wireless thermostatic radiator valves to your radiators and the Heat Genius system can control them individually.

Each room has its own seven-day timer, enabling it to have its own heating schedule and unique temperature settings. So, for example, while the heating in the living room would remain set to 20 degrees from 6pm to 11pm, the heating in the dining room would go off after 7.30pm when nobody was using it. The kids’ bedrooms would start cooling down after 8pm, while the master bedroom wouldn’t start heating up until 10pm.

With this ‘zoned heating’ approach, you can heat only the rooms you actually use, potentially saving you energy and money.

Each room has four settings: Off, Timer, Footprint and Override. We’ve covered the Timer mode, and the Override mode enables you to boost the heating for a specified period, say an hour. The Footprint mode is the most interesting of the bunch, as it takes control out of your hands and puts an algorithm in charge.

With additional PIR/temperature sensors, not only can a full Heat Genius system track the temperature in a room more accurately, it can also monitor a room’s usage. With room sensors and the Footprint mode engaged, the Heat Genius box watches when you use the rooms in your home and learns your schedule. This enables it to predict when you’re in and when you’re out, and what rooms need heating and for how long.

It can also link rooms together, so that multiple rooms heat up at the same time – perhaps the children’s rooms, or the kitchen and the dining room. The system also factors in local weather data, which you can see on the app, so it knows how long to preheat a room. In the winter, a frost protection feature prevents the temperature from dipping below 4 degrees C.

Footprint could be the system’s killer feature, and it works (for the most part), although I found that I reverted to the Timer setting after a while, partly because I wanted more regimented control over heating periods and partly because I didn’t fully trust Footprint. Radiators didn’t seem to switch off when a room was vacated, or the heating didn’t kick in when a room was suddenly used.

Both the PIR sensor and the thermostatic radiator valves take time to react, and ultimately I preferred the reliability of a timed schedule. Even without the Footprint mode and its learning algorithm, Heat Genius still gives you the ability to program and control your heating system over the internet, track the temperature in multiple rooms and heat/cool those rooms individually.

As a bonus, the system also enables you to program and control smart plugs (£29.99 each), which you can connect to lamps or appliances. It’s a significantly more expensive solution than, say, a Masterplug Plug-In Mechanical Daily 24 Hour Timer from Screwfix (£4.99) – but you can’t remotely adjust a Masterplug over the internet.

Heat Genius gives you unprecedented control over your heating system, so much so that you’ll find yourself playing with the app every chance you get for the first few weeks, checking the temperature/occupancy charts and fiddling with the timer schedules accordingly.

The system isn’t perfect. I had a few issues with the hub connection dropping out, and one day the dining room inexplicably showed a temperature of 61 degrees in the app. But Heat Genius has since rolled out a software update that improves the reporting of the Footprint mode, and gives you manual control of Whole House heating via a traditional wall-mounted thermostat. Unlike my old heating system, this new one is improving all the time.

Every so often you come across a new technology that significantly upgrades a particular experience. You know them when you use them – an MP3 player instead of a Walkman, TiVo instead of a VCR, the iPhone. You can add intelligent central heating systems like Heat Genius to that list. Don’t underestimate how useful it is to be able to control your heating remotely; and, with its intelligent Footprint mode and smart plug support, Heat Genius moves into smart home territory.

After six months of testing, I’ve ditched the TRVs in favour of whole house heating as, with a young family, we seem to use all our rooms all the time. I like the idea of handing my heating over to an algorithm; but I also need to trust it, and I’m not sure that I trust the technology yet. There are too many failure points. In a traditional system, your heating is either on or off – here, there’s a wireless controller and a boiler controller, plus radiator valves, IR room sensors and smart plugs.

A Heat Genius system is a pricey investment. A typical five-room setup (with a Heat Genius Hub, boiler controller, TRVs and PIR sensors) can cost over £700. The good news is that you don’t need to spring for the full setup straight away. You can start with the basics, and add to it over time as and when you need more functionality. But even the starter configuration is streets ahead of any dumb heating controller you might currently have. It’s not the sexiest of upgrades, but this is the future of home heating. It’s genius.